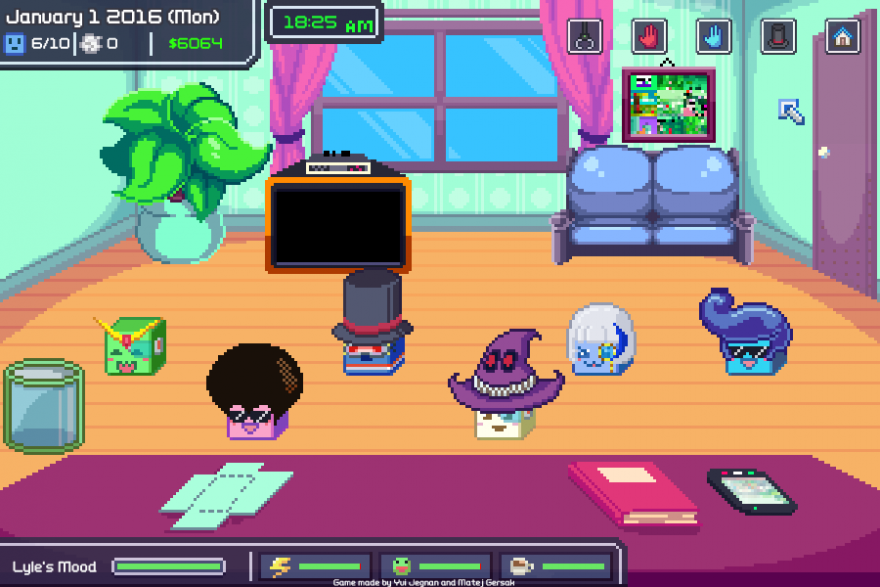 Pet simulators fill a hole in your heart like little else can. Well, actual living pets might do the trick. But if your parents were the type to deprive you of fury companions as a young’un (like mine were), then I’ll assume you’re still currently receiving emails from those three separate Neopet accounts you set up twelve years ago. …I mean, not that you actually still play it or anything. No, no. The emails just never stopped coming, that’s all…

For those still not living under the right conditions to adopt a four legged friend—or those too proud to log back into their Neopets accounts—there’s Cube and Me. As the game puts it, “who needs cats and dogs when you can have this new intelligent creatures from outer space?” So unless your dog is Laika, Russia’s favorite canine astronaut, I suggest you go adopt some of those Cubes. And fast.

After recently relaunching their Kickstarter campaign, the developers of Cube and Me released a free demo that provides all the thrills of caring for an animate geometric shape from space. Which, surprisingly, are many. Not the least of which is the dungeon crawling aspect added to the mix, which the developers say will become a much more varied location if they’re able to reach the funding goal.

The Cubes in Cube and Me reach Nintendo levels of so-cute-it’s-actually-kind-of-terrifying. As Lyle Dyson, your average frustrated 18-year-old boy living in the year 201X (who also doubles over as a work-from-home envelope folder), you come across these irresistibly charming creatures after witnessing a meteor crash and investigating. While there, you run into the neighbor girl Sarah Gable, who also happens to be the local teen engineering prodigy. Overtaken with curiosity, Sarah decides to take the Cubes home to study them. And you tag along as something of their manny (that’s man-nanny).

But I can imagine no amount of interesting alien Cube science that could be more interesting than spending some time with these kawaii little monsters. I found myself often just watching them interact with each other, or jumping and crying with emotion. Each one of them is as expressive as any pooch—if not more—communicating through at times hysterically jumbled thought bubbles about their jealousies, anxieties, and joys (of course.)

I saw one of my Cubes, the pink one whom I had equipped with a Princess Bubblegum-esque headband (oh, there’s a lot of hat crafting in this game, by the way), go through three different existential crises in the span of about thirty seconds. First, she seemed to get so happy that she got upset. Then she worried about The Claw, the tool that allows the player to sell any of his/her cube companions for monetary gain. Finally, she jumped around her brother, seemingly cyber-grunting her displeasure at him about his muscles before “panicking.” Another time, my blue cube stopped liking his shower all that much, and hopped to cower behind his sister.

The Cubes serve as the charismatic glue keeping all these moving parts together.

Even if the Cubes aren’t programmed to be as individual as I perceive them, the amount of personality and variation in their expressions establishes an authenticity through clear design. They serve as the charismatic glue, holding all moving parts of this RPG/roguelite/pet simulator/dungeon crawler together. To keep your Cubes happy, you have to buy them comforts and provisions. But to get money, you either fold envelopes for measly singles, or descend into the procedurally generated dungeons for bigger plunder. The crash site functions as the dungeon in the demo, littered with the hostile robots who crashed alongside your geometric buddies.

Although (as mentioned above) you can upgrade and sell your Cubes for money, you have to sit through all your other Cubes’ tears while they mourn the lose of their brethren. Granted, it’s a depression they get over pretty quickly. But what kind of price tag are you willing to put on your immortal? Because that’s what if feels like your selling when you claw one of these cuties out of your life.

Like my Neopets of old, I’d do just about anything to make enough coin to spoil my little critters. Luckily, the dungeons provide plenty of treasures, and you earn that treasure fair and square (pun intended). During battles, players must protect and pick up their Cubes to ensure their kept out of harms way while each deals their own individual type of attack. Using heating and cool-down systems, players pick opportune moments to push their Cubes into “hyper mode,” which makes them send out their most powerful move of all.

Though the demo mostly only shows the basic experience of the game, devoid of any narrative cutscenes or story development, the Kickstarter campaign video promises a quaint and beautifully rendered story. The two main characters, Lyle and Sarah, are the perfect alternative coupling. Lyle, clearly the less talented and driven of the two at first, takes over the role of caregiver only to demonstrate just how rewarding and exhausting the work can be. And Sarah—well lets just rejoice for a young female engineer role model not written by the Barbie corporation.

The two devs working on Cube and Me, Yui Jengan and Matt, urge potential backers to understand that they will not be able to release the game without the Kickstarter funding. They promise to provide frequent updates on the process, wether through Tigsource, Tumblr or Kickstarter. You can play the free Flash demo here, on their website.