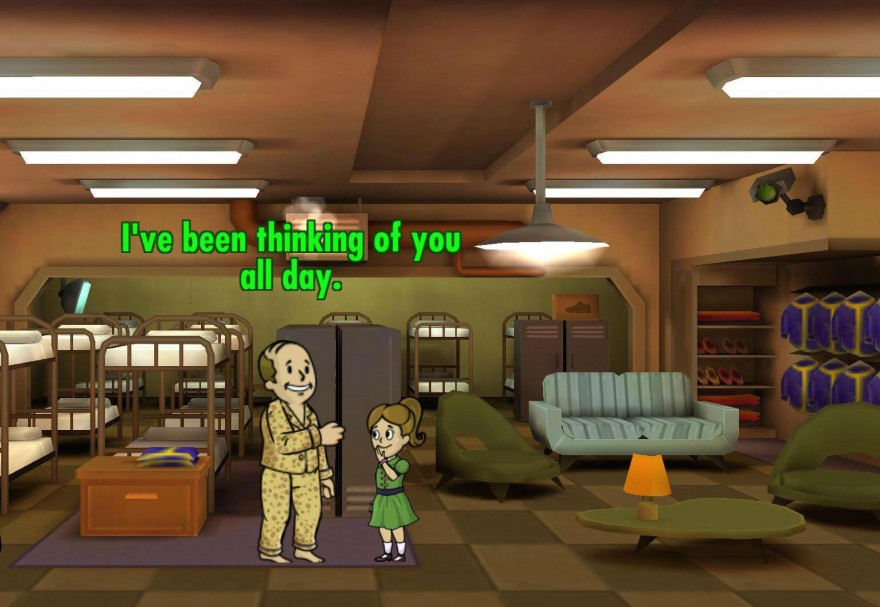 In the daily routine of this writer, mobile games serve a specific purpose. Though I offer some games an indistinct length of my time—Dota 2 receives quasi-monastic devotion on a regular basis—I have inscribed the mobile game into each day’s brief but unproductive gaps. In this sense, the mobile game is bound in time and space and I expect these boundaries to be respected, on penalty of a swift and ignominious uninstallation.

Perhaps this is naïve. Push notifications, after all, can be disabled, and I am certainly not forced to play mobile games while waiting for my coffee. Yet in the days since its release, Fallout Shelter, Bethesda Softworks’ iOS companion game for the studio’s upcoming Fallout 4, has openly mocked my neat compartmentalization of the mobile game. An exceptionally uncreative piece of schlock, the only boundaries Fallout Shelter appears interested in transgressing are those belonging to its players. Despite my best efforts, Fallout Shelter managed to shove itself into my routine with all the delicacy of, well, a nuclear detonation.

An exceptionally uncreative piece of schlock

Fallout Shelter is “new” in the way that a junker built entirely of used parts is new. Where Fallout 3 thrust the player into a melancholy, radioactive wasteland, Fallout Shelter concerns itself with the minutiae of the underground vault the player leaves behind. What emerges is a resource-management simulator that cobbles together traces of XCOM: Enemy Unknown’s underground base construction and The Sims’ personal micromanagement, buried (as it were) beneath the familiar trappings of the Fallout series.

In practice, though, the flow of play has less to do with such admirable antecedents and more to do with PopCap’s manic flash games of the early 2000s, Insaniquarium in particular. As overseer of Vault 322, I was tasked with tending to the lower end of Maslow’s hierarchy of needs for the dozen or so dwellers who initially inhabited this particular shelter. Dwellers, when assigned to appropriate rooms, produce food, water, and electricity. Production is measured in real time, which means the player either needs to keep watch for each new load of resources or wait for the inevitable push notification. When complete, tapping whatever room is ready to share the fruits of its labor produces a gratifying burst of resources, setting up a system of repetitive reward.

whatever personality the player has assigned to them withers away

It’s quite fun, at least for a while. Fallout Shelter has internalized the logic of the free sample and so is initially generous with its rewards—a skilled dweller, a high-quality weapon, an inexplicably flattering toga—for completing comically simple tasks. But things start to slow down after a few days of play. The crises—roach infestations, kitchen fires, and raider attacks—become more frequent, and the management of several dozen dwellers becomes substantially more labored; whatever personality the player has assigned to them withers away, supplanted by an all-encompassing functionalism. And when Fallout Shelter’s balancing act of production and consumption wears thin and progress slows to a crawl, its true purpose reveals itself: to encourage the player to purchase “Fallout Cards,” which yield the same skilled dwellers and high-quality weapons teased at the game’s outset. How ironic that even in a world where money has no value, it still has all the answers.

Once Fallout Shelter’s charade is exposed as such, it becomes a lot harder to think of the game as a work of creative production. Instead, it feels like necessity—its genesis not an act of willful creation, but of a franchise being tended like a endlessly fertile garden. At its worst, Fallout Shelter is the cynical answer to a trio of Bethesda’s multimillion dollar questions: How do we make players excited about Fallout 4 play a mobile game? Just how much value can we squeeze out of this brand? And how do we maintain the hype we generated at E3 until release?

It’s this last question, though, that’s most insidious. There’s something undeniably radioactive about how Fallout Shelter seeps into your life, pestering you with push notifications and occupying your space like a particularly intransigent roommate, one you only agreed to live with because you like his older sibling. The purpose, of course, is to keep Fallout on your mind until the main dish is released in November. With nuclear arrogance, Fallout Shelter shatters the so-called “magic circle,” refusing to acknowledge a distinction between the game and the real. When is the last time you were made to think about science fiction in terms of your own life’s hours?

What secured Fallout 3 its digital immortality was its fusion of a superb role-playing game with an even better sense of place. Empty vistas and burned-out cities captured the quiet despair of its wastelands in a way that few others have, before or since, in this critic’s opinion. It was not hard to lose one’s self among its ruins. Fallout Shelter has the opposite effect. Like its namesake, the game is inescapable––it mutates its form and finds ways to occupy the little places in your time and mental space. It settles in you, with or without your consent.

Many games disrespect their players’ time, but Fallout Shelter holds more contempt for the player than most. One night, at the game’s encouragement, I sent my most well-trained dweller into the Wastelands to forage for . . . well, something. Because I had the audacity to go to sleep before recalling him to the relative safety of the vault, I woke up to discover that he had expired from radiation sickness (at roughly 4:30 AM my time) and that I would need to pay a hefty (at the moment) fee to revive him.

“This is fucking bullshit” were, I think, the words that immediately preceded Fallout Shelter’s swift and ignominious uninstallation moments later, and I have not thought about the game since. Its half-life wasn’t very long at all.