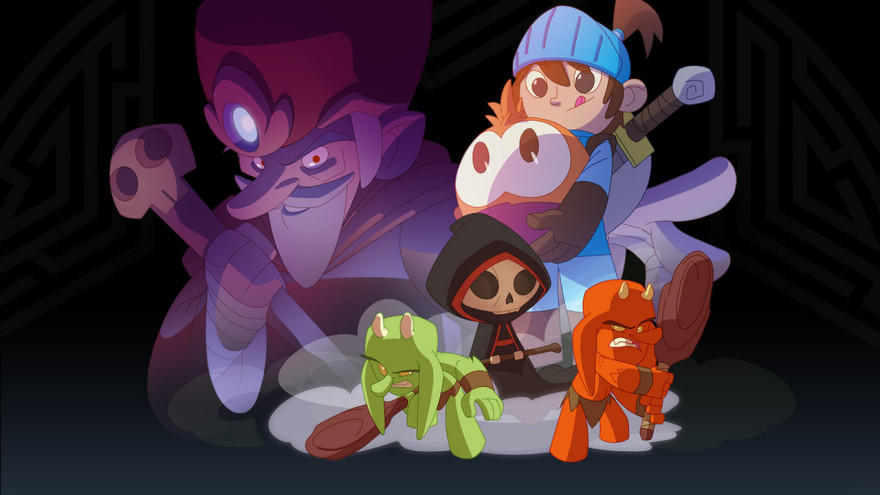 Beacons are a reliable source of comfort and safety in Famaze. Igniting them floods each procedurally generated maze with a small radius of magnificent light. The monsters that are caught in this light immediately revert back to their original form—the turnip-like rutabagas—free from the mad king’s curse and his insatiable appetite for rutabaga pudding.

Light is warmth and visibility; it also reveals hidden traps and treasure chests full with gold. It comes in mobile form—you can drop it as a flare to remove a threat, or throw it as a fireball to incinerate an enemy and light up a corridor. After traipsing through dark cellars where purple slimes reside, and ugly grottoes stained with goblin snot and the remains of human bodies, you learn to love light unconditionally.

your fingers nimbly dancing across the arrow keys to avoid dead ends and pincer attacks.

That’s precisely where Famaze creator Oryx wants you. Just as you grow confident in navigating the unknown darkness of each maze, the one-eyed floating spherical mass, known among D&D crowds as “Beholders”, crashes the party. You’ll see these abberations clogging up corridors as they snooze, prompting you to tread carefully around them so as not to disturb. But these monsters have no ears, only eyes.

Light up a beacon and they’ll stir from their slumber, staring at you, wide-eyed and ready to pounce. It remains to be Famaze‘s only moment of terror as, suddenly, you’re faced with having to rethink your liberal use of light. It’s a brilliant switcheroo.

Still, it might not increase the challenge of Famaze enough for roguelike fanatics. Permadeath is a staple trait of roguelikes. But in Famaze you’ll restart on the same level you died upon. The 16-bit graphics suggest a SNES-hard challenge but Famaze doesn’t match the comparison to the arcade games of the retro-era beyond its visual similarities. There is an Expert difficulty that limits how many health points you can gain but progression feels more luck-based rather than due to the execution of highly skilled play.

It is a shame there aren’t more complex systems at play to add more deliberation—some people may even deny it the “roguelike” label. But, at the same token, that would take away the flow of bulldozing through the dungeons: chugging on health potions, zapping through walls with teleport orbs, your fingers nimbly dancing across the arrow keys to avoid dead ends and pincer attacks.

Make no mistake: Famaze is a streamlined puzzle adventure best played sparingly, or you risk exhausting it in a few hours. Unfortunately, that’s the hardest thing to do—stop playing.

You can purchase Famaze for Windows on Steam.