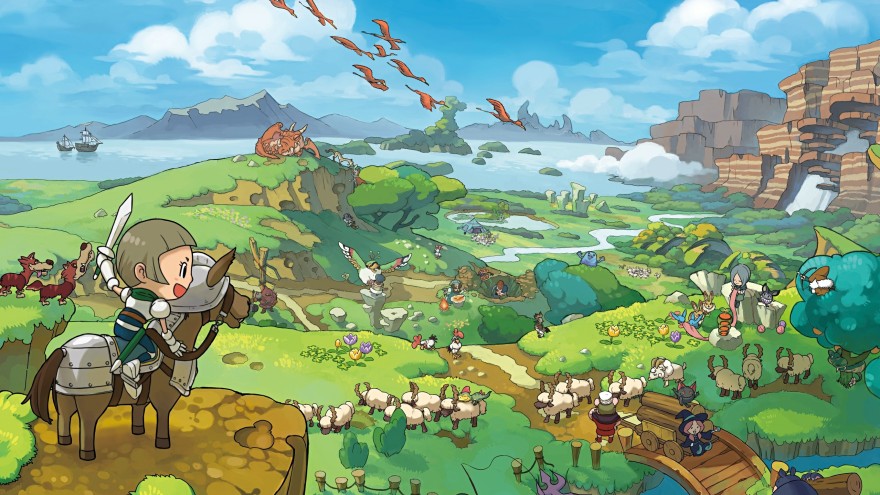 In real life, I try preparing chicken thighs for dinner, but the meal is delayed as I struggle to trim the fat and skin from the carcass.

In Fantasy Life, I begin as a Cook. Soon I’m roasting perfect chicken kabobs with but a few button presses. This is the immediate appeal of Level-5’s newest role-playing game, published in North America by Nintendo for their 3DS handheld. None of us can claim to be wide-eyed adventurers in fantastical lands, destined to save the kingdom with some magic sword. But what if our desires are more pedestrian? What might life be like if I was a humble fisherman? Or worked in a cave mining ore? Or a sure-handed cook with lightning-fast knife skills? Fantasy Life allows you to pursue your more mundane fantasies.

I thought this is what I wanted. I’ve swung enough swords. Now I can stir soup, or drop my line in a river and wait for a nibble, or swing a pick-axe into stone and sort out the gems. Finally, a role-playing game where the role goes beyond Warrior or Mage and we can be someone we might find walking through our town’s Main Street. Games have long jumped past “ordinary,” thinking it blasé and too dull by half. They start instead at “extraordinary” and lay the extra- on thick.

I’m excited to lay down my sword

Susan Orlean knows different. She implies, in the introduction to her book collection of profiles called “The Bullfighter Checks Her Make-up,” that matadors aren’t the only ones with stories worth telling. “An ordinary life examined closely reveals itself to be exquisite and complicated and exceptional,” Orlean writes, “somehow managing to be both heroic and plain.”

As cooks will tell you (or tailors, or ore-miners, or anyone), the satisfaction of a job well done can come from the smallest victories. And so my fantasy life as a cook begins. I’m excited to lay down my sword and worry not about bashing in the skull of a mutant but about making the perfect Winter Stew.

First you need two carrots, two pieces of chicken, and two jugs of milk. So you seek out a garden, then stop by the market, and find a dairy farm. Then you travel back to the restaurant at which you are apprenticing. On the way you might talk to a young woman who tends to baby chicks. She wants to feed them a certain kind of mushroom. If you find her five mushrooms, she’ll give you money (called Dosh) and some apples. And if you have apples, you can now make apple juice! So you divert your path to find these mushrooms in order to have apples … and on and on.

The game very quickly becomes a series of quests for certain objects, either for your own needs or the needs of others. Playing the game soon equals performing similar tasks over and over, a repeating sequence of busywork. Thankfully, Fantasy Life should have been called Fantasy Lives; twelve occupations await your mastering, so even if one becomes a slog, simply switch your job and refresh your daily routine.

The skills you learn remain with you over time. So to cook fish stew, you can buy fish from a seafood market. Or, if you take on a life of an angler, you can learn the art of fishing and drop your line into a pond or river and catch your own. Fantasy Life is that old maxim about giving vs. teaching made digital. You can pay for everything and accomplish the same goals. But choose to learn new skills, deepening your reservoir of abilities, and live a more satisfying life—in this case, represented by more Dosh in your pocket.

As the quests mount and your pouch fills with dandelion fluff and copper shards and oak logs, though, you lose a sense of purpose. You’re pointing in seven directions at once. You travel across town as seen from overhead, a bright, colorful, non-threatening medieval village. In every square, five townspeople have cartoon bubbles over their heads filled not with words but an ellipse being dot, dot, dotted. This is an accurate visual of Fantasy Life’s goals: a vague representation of something more, unspoken but unquenchable. Here is where the fantasy and reality crash together and the player sees her apprenticeship as a cook or an angler or a miner not so far removed from whatever it is she does in her daily life. There’s always more carrots to gather; accomplishing one task merely sets up another.

The story told is more than simple Job Simulation. There is a kingdom, ruled by a child-faced boy, and there are monsters. A mysterious talking butterfly leads you around. As you explore the land, the typical dangers from RPGs past become clear and you, Cook-Angler-Whatever, are the only hope. Part of me wishes the requisite questing was left out. We’ve saved a thousand kingdoms. But how many roast muttons have we cooked with fresh meat over a blazing fire? Allow the Life part of this game to breathe, I say. Alas, many players care for the Fantasy, and Level-5 dutifully obliges.

In fact, your first tool is by default a small sword. You can always swing it, regardless of which Life you choose. Soon after the initial apprenticeships have begun you find yourself in a grassy plain, ready to engage in battle with evil creatures like… sheep. And giant caterpillars. And ostriches. Eventually you encounter more fearsome foes—what’s a fantasy without a dragon?—and what’s surprising about this most clichéd of role-playing roles is how fun it is to fight.

Both heroic and plain

As much as I say I yearn for a Cooking: The Game that goes beyond Cooking Mama’s simplicity, I soon tired of fetching ingredients and mashing out another new dish. When I stumble into the forest and have to clobber innocent animals with my dinky sword, my fingers tense up and I lean into my screen. Like good literature, games need a conflict; there’s nothing so conflictive than the swipe of a broadsword across the hide of an attacking wolf.

Fantasy Life proposes that simple skills such as sewing and mining are worth devoting one’s existence to. But by hewing to the constraints of traditional RPG design, these are best enjoyed as means to other, more vicious ends: stitch up your cloak so as to take less damage from enemies; pound that iron into a stronger, mightier blade. You can play the game as a Tailor. But you’ll want to switch over to Mercenary soon enough.

There’s a reason players don’t pay MSRP $39.99 for a portable version of Cashier or Grade School Teacher or Bank Clerk. They already know how that story goes. It’s certainly possible for games to evoke the heroism of a plain life. I look forward to that day. For now, maybe there’s something to that “extra-” prefix after all.