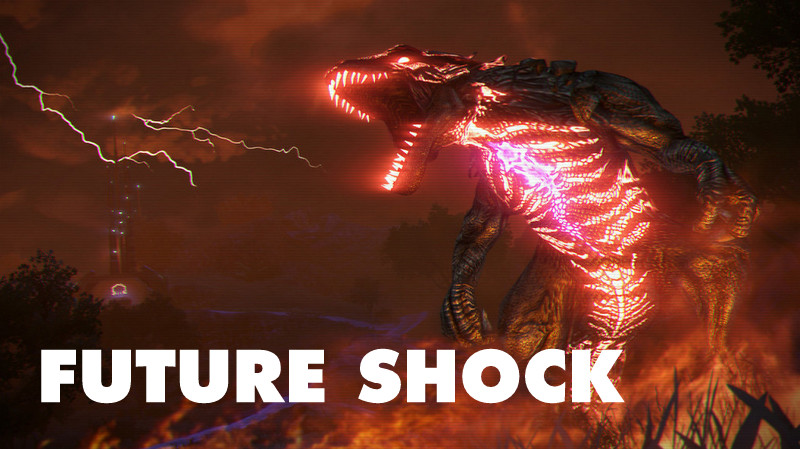 When James Cameron’s The Terminator released in 1984, I was a three-year-old from the suburbs who somehow hated oranges. Soon I became addicted to drawing muscled aliens destroying skyscrapers à la Rampage. For three straight years, I dressed up as Freddy Krueger for my elementary school Halloween parade. When my older sister popped her Poison cassette tape into the car stereo, I gazed at the cover of Look What The Cat Dragged In and wondered why these ladies sounded so much like dudes.

Finally, when I was old enough to watch Arnold Schwarzenegger and Michael Biehn fight over Linda Hamilton’s unborn child, I scanned the TV Guide and recorded 98% of its 108 minute running time onto a blank VHS tape. The opening title sequence stands as one of my lasting memories as a child, watching the giant letters slowly unfurl across our 4:3 screen over and again.

Far Cry 3: Blood Dragon is a sequel/reskin to the 2012 first-person shooter set in a neon-soaked apocalyptic future heavily under the influence of ‘80s sci-fi/action film nostalgia. I thought the two would meet and immediately fall in love—my childhood, entrenched in cybernetic organisms and glowing red eyes under glass, and this game, with a cheeky trailer as if produced by Lou Scheimer and playing from an old VCR. But one grew up and the other didn’t, and I’m left remembering why so much of today’s modern games have left me as cold and uninterested as a humanoid machine walking down an Old Country Buffet line.

Today’s modern games have left me as cold and uninterested as a humanoid machine walking down an Old Country Buffet line.

The first sixty seconds of Blood Dragon was the tearful reunion I expected. A mock-tracking bar replaced the typical loading message. Ubisoft’s logo swirled in with pixelated imperfection. The title screen fades in on a purple vector mountain range, lightning crashing on the horizon. A foreboding synth wells up from the fragile void before crashing into warm amniotic pulse-fire: the theme from Australian instrumentalists Power Glove is a magic act, a time-travel siphoning of a sound long since gone. I set the controller down, let the thunderstorm crackle over the distant peaks, listen to the chorus of square waves; we have returned to a glorious past, when lasers were fiction and 2001 was the future.

Then I hit the start button. My dreams, sprayed with liquid nitrogen, froze; my hopes, as Blood Dragon’s bullet pierced the ice, shattered.

Much of the story is told through deliciously outdated static screens with single-digit animation, igniting my memory of Ninja Gaiden’s remarkable interstitial graphics and the glory that followed. But what follows the past-tense gimmicry of aping another era’s style is a return to the present era’s mechanics and presentation. One flows into the next with little explanation; we’re in an 8-bit world circa 1986, we’re clutching twinsticks while moving a 2013 character around.

Blood Dragon might have acknowledged the gap and used the time-travel conceit of its influences in surprising and clever ways that affected gameplay. Instead, we children of the eighties are teased, a sprig of mint from the garden of our idyllic memories placed on our tongues, only to dissolve, leaving the acrid taste of the unsatisfying and familiar.

As serious as Far Cry 3 attempted to be, Blood Dragon goes the other way, mocking in-game tutorials, mission objectives, and menu descriptions of items. Everything screams at you to be taken in jest. Colonel Sloan “crawled out of the womb with a knife between his gums.” Loading screen advice tells you to pick up ammo so you can reload your gun. Push the right-stick in and your character, Rex Power Colt, gives the middle finger. I guess this is hilarious?

I guess this is hilarious?

Colt, voiced by Michael Biehn (aka Kyle Reese from The Terminator), speaks directly to the in-game heads-up display, calling the feminine robotic voice “HUD” and most often saying some variant of “fuck you.” A few glimmers of whimsy squeak through: the magically regenerating health of today’s era is activated by squeezing one of those grip-strengthening tools seen in 1980s Office Comedies. But all that yelling to be noticed just made this player deaf to the noise.

The tone is very much a current tone. For all the hoopla about Blood Dragon as a love letter to our past, the game is doused in the cynicism and winking irony of a culture that broadcasts its strength by how much it doesn’t care. I expected to be charmed by the blatant lampooning of a time many current players cherish in hindsight, but was only reminded how guileless and sincere much of Eighties culture was; in stripping that naivete away, what’s left is all bluster and no boom.

In an interview with Eurogamer, Evans said, “The one thing we didn’t want to do was play it safe. We’re in a business where we’re quite risk averse – everyone plays it pretty safe. But we were given that opportunity to be like, f*** it, and basically do whatever we want.”

From its surprise reveal only a few months ago, Blood Dragon appeared to be an insane escaped convict, digging under cover of darkness and finally crawling through a tunnel of waste to a freedom on the other side of the fence it was never supposed to see. Games like this don’t often get made. And I applaud the chutzpah, both from Evans and Ubisoft themselves, who greenlit a game resembling the aftermath of a post-PCP spitball session.

But dressing an already-functional mannequin in a neon-flecked leather corset doesn’t make me wear clothes in a new way. Developers have always done this: remaking popular games with varying degrees of nuanced difference. Blood Dragon, I’d argue, plays it even safer than most. Take away the amped-up homage to sci-fi conventions of the 80s: the titular dragons who shoot laser beams from their eyes; the purposefully bad voice-acting dripping in innuendo; the confusing storyline with plot-holes covered in explosions; the cybersharks wearing sunglasses. What’s left? Far Cry 3, a critically-acclaimed game that sold over 4.5 million copies.

When given the chance to make whatever they wanted, they made last season’s hit game, chopped it into a third of the original’s size, sold it cheap, and splashed some fluorescent paint on the walls. Nobody’s claiming this to be the reinvention the first-person-shooter genre needs; hell, with over twenty-two million copies sold of Call of Duty: Black Ops 2, the majority of players aren’t looking for reinvention. Evans even said during a press event, “The game is stupid,” and wore the self-proclaimed label like a medal, because sometimes, stupid games are fun. I don’t disagree.

But if you don’t find modern open-world first-person shooters fun, you won’t find this one much of a treat either. I realized my error during an early mission, during which I needed to reach a dam. I’d been expected to go on foot; instead, I jumped in the water and swam toward the arrow pointing out my destination. I reached the dam, triggering the next set of objectives, but couldn’t climb out of the water to progress. I wasn’t expected to arrive this way. When I swam around, I exited the mission area: automatic failure. I materialized back at the last checkpoint, already in the water and on the wrong path, stuck in a loop of impossible progression.

This time, the game had no pithy remark or winking reminder of its own indifference. So I gave up, too. I pushed in the right-stick, flipping off the lushly animated water rippling against a neon-purple soil, and turned off the game.