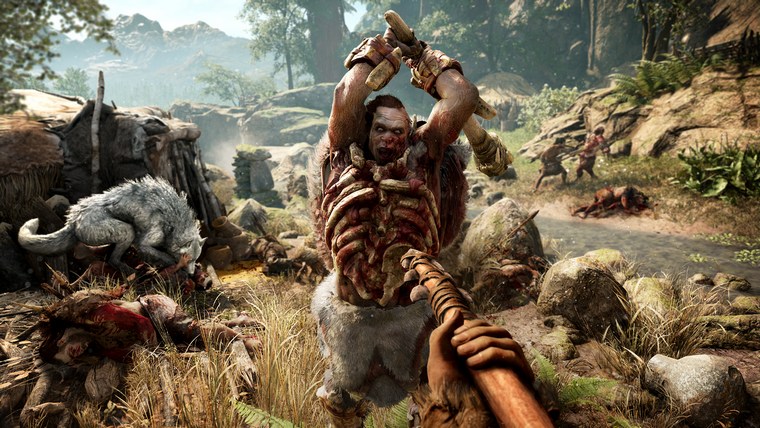 “Your game progression can be checked in your personal cave.”

These are some of the phrases I’ve encountered in my time with Far Cry Primal, and they encapsulate a fundamental disjunction that seems to define it. On the one hand, this is a serious and gorgeously realized caveman simulator, a playable diorama: a Far Cry in which every club, arrow, and spear must be crafted; in which darkness is a threat that only fire can abate; in which the formation of a rudimentary society feels, from a narrative perspective, like a matter of life and death. On the other hand, it’s another Far Cry game—more broadly, another open-world game that feels like every other open-world game.

You become Rambo all over again

You’re presented with an extensive (and in some ways literally infinite) laundry list of tasks to do. You collect, collect, collect, with the lackadaisical urgency of a white-collar criminal picking up trash on the side of the road. You hunt, which means: following “hunter vision” detective clues exactly like Geralt and Batman; marking your enemies like Big Boss; performing takedowns with the decisive yet hollow click of an accountant closing a spreadsheet. There’s undeniably something satisfying about the Core Gameplay Loop we get here. But it emerges from the world-logic of a time and place unfathomably different from the time and place depicted. Bare necessity, meet market-driven refinement. “Nasty, brutish, and short,” meet “pleasant, relatively easy, and 25-50 hours of playtime.”

This is not, in other words, a game that effectively captures the anxiety of being alone in the unforgiving world, alone as a species. It sort of starts out that way: the darkness is more foreboding, the crafting less abstract. But then, very quickly, you’re amassing supplies and making spear-holster upgrades and spamming the heal button—which, even less plausibly than the typical magic health needle, involves chomping down on an indistinct chunk of meat—in the middle of melee combat. You become Rambo all over again, invincible and fearless, without a whole lot of friction or motivation.

At the same time, Primal makes a weirdly compelling case that it isn’t simply a reskinned Far Cry but a distillation of what the series has always been about. Previous Far Cry games flirted with totemism: fighting under the sign of The Shark or The Spider or The Tiger or The Elephant. This game makes it literal. Previous games nudged players in the direction of silent, bow-based predation, even as they retained a Call of Duty-grade arsenal. In this game, the bow is basically your only long-range weapon, and solid bowfeel was clearly a development priority. Previous games did everything they could to make hunting animals feel worthwhile and important, inexplicably making holsters and containers obtainable only via skinning creatures in a place otherwise littered with vending machines that could sell you a flamethrower. This game doesn’t need to make hunting feel important. In Far Cry Primal, you stumble into a jungle where the idea of Far Cry makes sense.

There is something primal about Far Cry Primal

In other words, there’s no mismatch between prehistory and the idea of Far Cry; there’s a lot, however, between prehistory and what it’s like to play Far Cry, and it’s a mismatch precisely between the game’s narrative of zero-sum survival and its accumulative, productivity-suite rhythm. In some ways it feels like a classic case of “ludonarrative dissonance.” But I think it’s more a case of dissonance between the unstoppable, constantly iterating ur-structure of open-world design—that creature of consensus that seems to refine itself and grow new features every time a new blockbuster videogame comes out—and the particularities of any historical period, prehistory included. 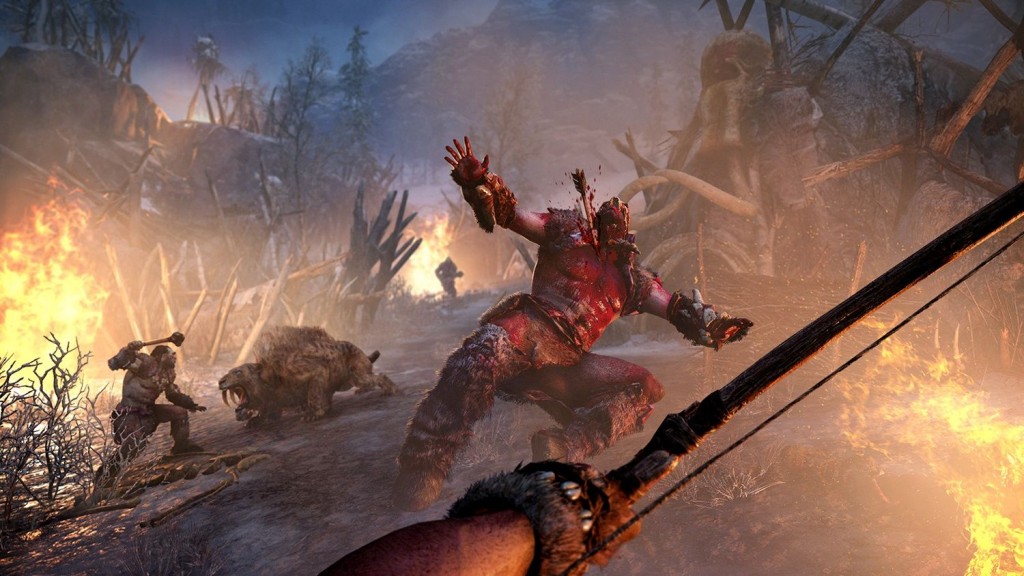 There is something primal about Far Cry Primal, but it resides not so much in the game as in what the game targets: whatever dopamine receptor gets hit, whatever basic need gets fulfilled, by the performance of tasks that are challenging but not too challenging; exciting but not too exciting; a little different but still routine. I have many mammoths and cannibals left to kill, and things may change. For now, I wonder why I feel so compelled—deeply, subcortically, primordially compelled—to kill them.