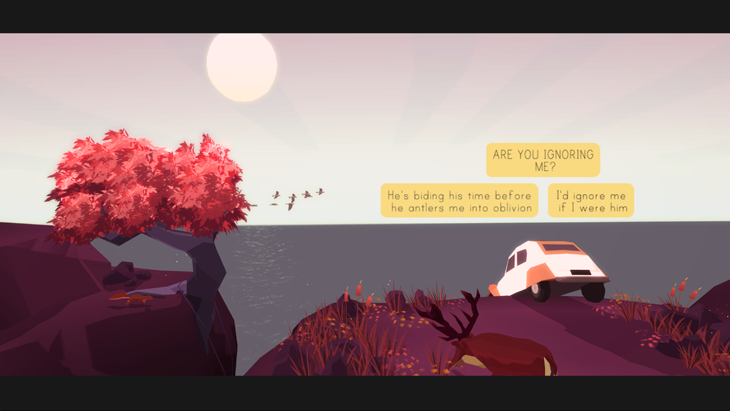 Transcendentalism and 19th-century American thought aren’t the typical influences in game design, but London-based programmer George Batchelor is prepared to overlook that.

Though he works primarily for the BAFTA Award–winning studio State of Play, Batchelor moonlights as a game maker on his own personal projects, such as the forthcoming Far from Noise. A low-poly, warm-hued game in which the player takes on the role of a woman in her early 20s having a lengthy conversation with a deer, it promises both a rich narrative and more than a few surprises. After driving through the woods, the young woman loses control of her car and finds herself teetering on the edge of a cliff, surrounded by nature and confronted with mortality.

“The game is essentially a story that takes place over a day and a night,” Batchelor told me. Little by little, strange mysteries begin to unfold; you’re made to face your own identity, your motivations, your fate—things set in motion before the game ever began. But “it’s actually pretty lighthearted, too,” he said. “It’s not all deep introspection. You crack a lot of jokes.” Batchelor credits the writers of the Transcendentalist movement—namely Emerson, Thoreau, and John Muir—as his inspiration. “I love how poetic and intense they get about the outdoors. It’s great.”

“You get these really great dynamics a lot in theater”

Another philosophical component of the game is that it’s built entirely around a dialogue. “There’s something about two characters just having a conversation that can be really powerful,” said Batchelor. “You get these really great dynamics a lot in theater, things like Rosencrantz and Guildenstern Are Dead—the back-and-forth between the characters is the best. Also, Daniel Clowes. Any dialogue he writes is brilliant. It’s fun getting into that sort of thing with games; people playing the game can then start to guide the conversation and set the pace.”

While most games use dialogue as a method of interrogation, either to find a clue toward solving a puzzle or help you get to the next environment, Far from Noise lets players simply experience a conversation for conversation’s sake. This involves making choices that steer the direction of the game’s story and trigger different events on each playthrough, which Batchelor hopes will add replay value to the narrative.

Batchelor has enlisted the help of musician Geoff Lentin to score the game, and hopes to launch the title on Steam Greenlight and itch.io later this year, once he’s released a trailer.

Visit the developer’s blog to find out more about Batchelor’s various videogame projects.