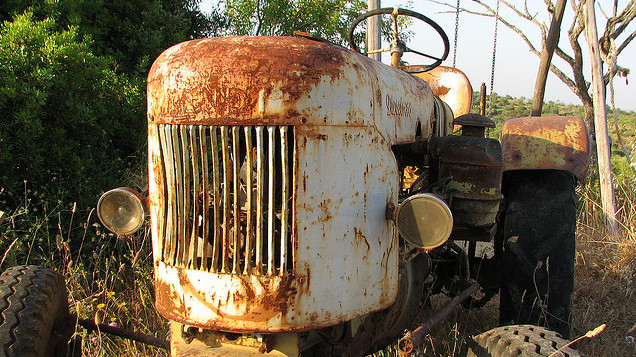 Green, slow food, locavore: Two decades ago these words identified a color, a pot roast, and a made-up creature resembling a cross between a train and a T-Rex. Today these are buzzwords identifying you as an environmentalist, or at least someone who cares about what they put into their body. The language of the land is on the lips of everybody these days, from politicians to local baristas.

Farming Simulator, a hugely popular game on PC coming to consoles for the first time, wants to tap into this sudden dirt-lust brought on by an increasing reliance on mass-produced goods and all things digital. But is this purported “simulation” a contradiction in terms? Our growing appetite for fake-realities is spawning a dangerous reliance on misnomers. Farming Simulation is the latest culprit: At best, a vague approximation that misleads; at worst, a vision of our world so disconnected from reality as to teach players lies about what they don’t already understand.

In 1989, the original SimCity released and became a hugely popular game, but not because of the inherent fun to be had with simulating our daily life at a macroscopic level. As millions left the urban centers for suburban expanse, SimCity evoked what had become an exotic lifestyle. Cities were places to visit; suburbs were places to inhabit. The dense swirl of congestion and high-rises was a foreign land for many; much of SimCity’s appeal was in manipulating this strange, unknowable reality.

Farming Simulator attempts to give us access to something we could do if we really wanted to.

Over the next two decades, the game has become a genre in itself, branching off into other fake-simulations that approximated complicated systems such as SimAnt or SimEarth. But neither of these spotlight actual situations in which the player could participate otherwise. We can’t shrink down and cultivate an ant’s colony, nor can we rise above the planet and decide its fate with deity-like precision.

But people do farm. They’re called farmers. They drive things called tractors, tend to milk-giving cows, and grow plants such as corn. Farming Simulator attempts to give us access to something we could do if we really wanted to. But the inherent distance between what is offered in-game and what is possible in real life is too great. What’s deemed a simulation becomes the exact opposite.

In John McPhee’s Oranges, he writes how “for a long time, people believed that salt airs coming off the Gulf Stream were somehow responsible for the quality of the Indian River orange,” a renowned strain of the citrus fruit. McPhee then writes, “Pomologists [fruit tree experts] say that the salt-air theory is nonsense.” The earth is a fickle mistress; it’s near-impossible to ever please her perfectly all the time. We could never simulate a system so organic and frangible as the practice of cultivating a productive harvest.

Playing the game, I feel unqualified. I know nothing.

This is one aspect of GIANTS Software’s Simulator that approaches reality, at least for this player: I have little hope to ever attain mastery of its rules. I fear this is an accidental truth. Playing the game, I feel unqualified. I know nothing. Information blurbs to aid the new player explain where to put your empty tipper when the combine is full; I know what neither the tipper nor the combine look like and so am utterly lost.

Minutes click by in seconds. Easy rock music plays softly in the background. Or mute the tunes and crank up the sound effects; it’s easy to zone out to the steady clatter of a tractor engine. After some time I even grew to enjoy the monotony, pulling one type of device over the earth, then pulling another device. Raising and lowering the metal teeth into the dirt. Maybe it wouldn’t be so bad, this farming.

Of course, “this farming” doesn’t resemble the farming of 2013. Dan Halpern, in an article for Harper’s last summer, explains that “33,000 farms—0.15 percent of the 2.2 million in the United States—account for about half of all agricultural revenue.” These mega-farms rely on giant customers, chains like Walmart or fast-food restaurants like McDonalds, to buy massive quantities of crops. But any operation unable to grow and process such huge amounts are effectively out of the game. They sell to local markets, or local customers through programs such as CSAs, Community Supported Agriculture. Some can make a living this way. Many others cannot.

What medium could be better than a videogame to display the mechanistic process by which plants are planted and crops are harvested in 2013?

Farming Simulator speaks to none of these issues: You sell your crops based on a varying price list tuned to mimic real market variables but which amounts to something closer to a randomizer. To do otherwise would likely break the consistency needed to offer a player new goals. But I want to see this game instead: Where huge monoliths destroy your family business with a flick of a pen, signing a contract with a rival plot; where a Happy Meal’s new inclusion of apples suddenly increases apple production by a thousand fold.

In another twenty years, grade-school kids may well be buzzing about the next big simulation game, neutering an antiquated technique and massaging it into entertainment: Writing in Cursive Simulator. Imagine: Connecting the various swoops and dotted i’s will feel like finger-dancing to children raised on a pure digital alphabet, just as FarmVille and Farming Simulator appeals to a generation a thousand miles removed from the tomatoes they buy at the store. We like to play with what we don’t understand. And today, we don’t understand farming.

A videogame could be the perfect medium to combat this ignorance, especially when so much of farming is less about the seed and soil and more about heavily-automated technology. What medium could be better than a videogame to display the mechanistic process by which plants are planted and crops are harvested in 2013? But for now, that simulation has yet to be made. I’ll be crossing my soil-free fingers.