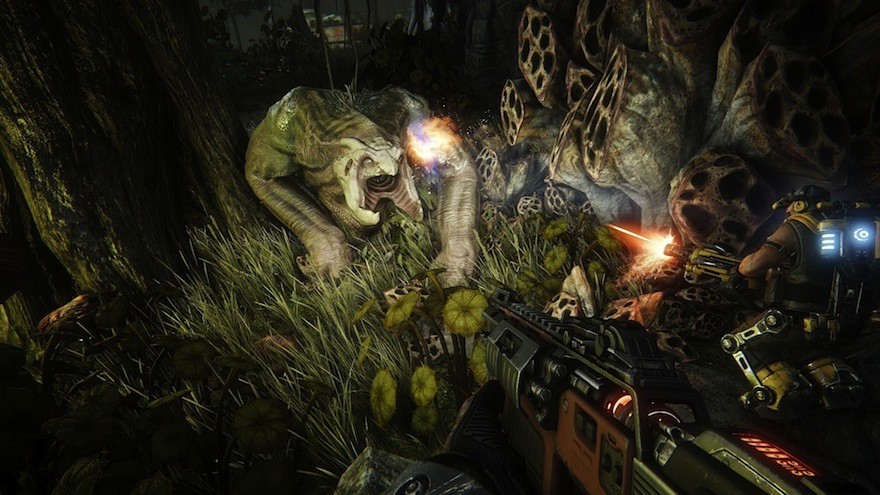 Cthulhu’s (or Kraken’s, as developer Turtle Rock would have it) visage in the menu screen of Evolve is, in a word, unsettling. Like the Xenomorph from Alien mixed with the cuddle factor of a de-masked predator, the face of Cthulhu hangs low with a particular ugliness. Four eyes blink at you—menacing, yes, but these eyes echo something of a deep, unspecified sadness.

And who’s to blame him? Upon entering a heavily coordinated and spectated trial of the game at E3, I was encouraged by the developer sitting next to me to flee the hunters who would soon be out for my blood. Cthulhu obliged my controls, and sought out a dark spot amongst the foliage scattered throughout the level. Developer Turtle Rock’s world echoes the design of some of Halo’s bigger multiplayer levels, albeit much wider now to accommodate the movement of giant monsters through them. Like Metroid and its mysteriously perfect morph-ball-shaped corridors, all caverns in Evolve are perfectly monster-sized. Cthulhu pondered, “Have I been here before?”

As The Cold One waxed poetically, I steered him across the map to a dark spot. The win conditions of Evolve are as follows: Either seek out the four hunters trying to kill you and kill them first, or evolve to your final form and take out the generator. What this generator is generating is unclear, but its destruction seems much more preferable than actively seeking out those who wish to see me dead.

Either deciding to gather for a spot of tea or destabilized by inner-group turmoil, the hunters were nowhere nearby for the first ten minutes of the game. These were the golden ages. I joyfully picked flowers and consumed the natural fauna, getting my first evolution with ease. I got points to increase my fighting skills, though during these peace times it seemed extraneous—where was my option to add points to cooking and other domestic pursuits? I spent some time here exploring the level, seeking environs that would prove good hiding spots. I mentally noted a few possibilities, but resolved to stay near the edge of a tunnel that I could sulk back in should danger arrive.

These moments, though—they were fleeting. I look back on them now, with a sepia glow. My eyes at the screen, the voice of God spoke to me in the form of a Turtle Rock developer through my headphones, Go find the hunters and give them a good fight. The moment was quiet in-game, so the noise in the air of E3 filled in some of the gaps of sound in the environmental audio. The Metal Gear Solid 5 trailer nearby sang out:

Standing on the edge of the underworld

Looking at the abyss

And I’m hoping for some miracle

To breakout to escape from all this

Obliged by the only force greater than The Cold One himself—that is, Hideo Kojima—I had to concede. The lumbering figure of Cthulhu emerged from his cave, well rested and ready to die. Evolve is only fun for everyone if everyone is playing, and apparently the hunters were tired of playing hide-and-seek.

I headed for the generator, as attacking it would signal the hunters. I knew my time alone in the cave was limited. My tendrils struck out lighting and the generator caught fire. The hunters were quickly within my view and began shooting recklessly. These Lilliputians circled and overwhelmed me with their harpoons and shields. Their coordination told me this wasn’t their first catch, nor would it be the last. The Cold One stared at me on the post-game screen, his melancholy stoicism admirable: as the player behind me was quick to remind, Excuse me, it’s my turn to play.