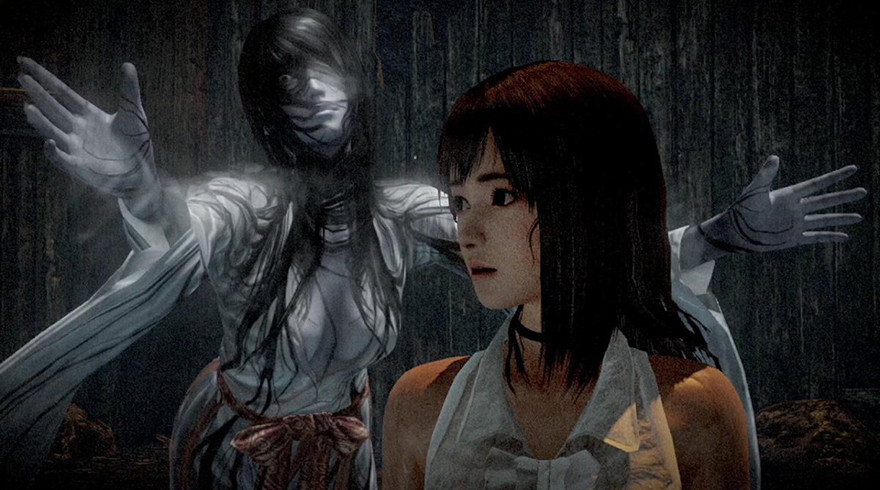 Historically speaking, if there is a technological discrepancy, then some will interpret it as the workings of a ghost. From spook hunters shrieking at glowing dust bunnies to William H. Mumler selling Civil War fallen-shaped blobs for profit, when the camera picks up the unknown it becomes the paranormal. A smaller but significant horror series, Fatal Frame, has capitalized on that concept, overlapping it with some international beliefs that the camera can siphon its subject’s soul. This terror has also been updated over time: the invisible dread that once lurked inside magnetic tape in The Blair Witch Project was upgraded to closed-circuit night vision for Paranormal Activity and even Skype for Unfriended. So too does Fatal Frame get a techno-bump, seeing the Wii U’s iPhone-ish potential and seemingly making a game because of that and that alone.

If you’ve ever noticed that a lot of Japanese horror games revolve around fishing loved ones from clearly foreboding places and wondered why no one’s ever monetized that, then here’s your answer. In Maiden of Black Water you play as Yuuri Kozukata, an assistant to Hisoka Kurosawa, a psychic PI who lives at the bottom of a cursed mountain and retrieves missing persons at the request of their families. After what seems like a routine gig, your boss vanishes into the woods, leaving Yuuri to team up with a researcher, Ren Hojo, to try to save Hisoka and other recently vanished women.

Whether it’s the history of landslides, occult rituals, serial killers, creepy children, hypnotising memento mori or the surrounding suicide forest, the question of how the mountain became so rich in evil spirits is a whodunit of creepy causes. Parsing the possessing specters in the mist and murderous ceremonies that might have created them is a real chicken versus the egg mystery. While there is a lot of exposition to summarize events you had just played through, the ambiguity of the cause tugs you more subtly. You’ll begin to notice a revolving cast of ghosts, and you can start to piece together who were key players in these demonic tête-à-têtes.

While that inherent mystery can fuel you, the wafer-thin characters and some of the bland atmosphere don’t really encourage the journey into terror. A system based around wetness and safety, the worst spirits seemingly residing in the mountain’s water, becomes more of a distraction than anything. When it rains it really pours: you’re either bone dry or drenched, and the repercussion is more ghost encounters, not harder ghost encounters. You also have to shake off a spooky hand when you grab objects, which will only happen when soaked or at predetermined times. Yet a loud five-second mood-setting preamble happens every time you pick something up or open a door, regardless. Compared to some of the previous Fatal Frames, especially the exceptional Crimson Butterfly, Maiden of Black Water feels like a lot of things stapled together, and it’s clear to see what it’s all specifically stapled to.

Using the Wii U’s gamepad for the camera obscura feels like destiny. Nintendo’s most recent second screen is one of the most underused features of the device, despite the fact that some games like Nintendoland proved the richness of its possible applications. None of its uses in Fatal Frame are brilliant, but the implementation alone gives the series a second wind.

In each game, framing the ghosts in certain ways will do more damage. With that concept liberated from the joystick, its freedom grants a greater purpose. When hit, the ghosts will flake off bits of ghost dandruff, and by swinging or turning the gamepad on angles, from wide vanilla Walmart family portraiture to the leaning ‘90’s skate-video frame, you can capture more ghost parts efficiently. It adds more to failing as well: if you lose your cool trying to snap some of the faster or aggressive phantoms, or if you just get plain spooked, you’ll begin to empathize with those TV ghost hunters who couldn’t seem to get a focused conclusive ghost picture if it sat for an afterlife drawing class. Fatal Frame takes the techniques of angling and framing you’ve mastered with your selfies and repurposes them for horror survival.

This Fatal Frame is hoisted by one specific element. This can feel truest during some truly arduous backtracking. Not the necessity to survival kind of backtracking, but the different characters literally retracing each other’s steps from chapter to chapter kind of backtracking. Thankfully, the lynchpin for this game is a pretty decent lynchpin, so if you love ghosts and Instagram and don’t mind redundancy, then Fatal Frame: Maiden of Black Water is the sixth scariest thing you can do with a camera.