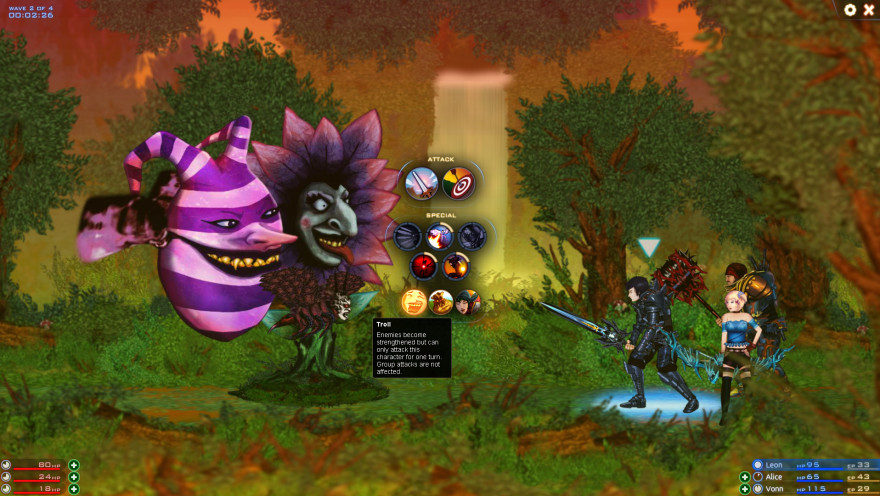 It’s far too easy for the team at Easy Skies to say that Fearless Fantasy is “probably the weirdest RPG you’ll play this year.” That’s not their fault. Computer role-playing games have been reiterating the fantasy lands and lore of Dungeons & Dragons and Tolkien’s Middle Earth for decades. As a result, the genre’s fiction is unimaginative, tired, and repetitive.

As the claim behind Fearless Fantasy is, seemingly, to break free from RPG tropes, you may be surprised to find that it doesn’t stray too far from them. Its story follows a snooty monster slayer called Leon who says “Not!” after too many of his sentences (not!). He’s faced with safeguarding Princess Alice (yes, a princess) to ensure she escapes the marriage that was arranged for her upon birth. She’s supposed to wed Mark Hamill’s take on Batman’s nemesis, the Joker. Well, it might as well be: King Xola laughs thrice as much as Leon says “Not!” and wears a Cheshire Cat’s grin behind his makeup. Being opportunistic, Leon uses his newfound role as escort to pursue his lifelong dream of slaying Xola’s pet serpent—and ode to many a Ray Harryhousen monster—Deothas.

Perhaps that sounds crappy. The story belongs to a Saturday morning cartoon, that’s for sure. The same can be said for the jokes, which often fall flat. But, somehow, it all fits together in an unabashed B-movie style. Swords double up as laser rifles; you battle matryoshka monsters called Peepomites that have the snarling facial features of Tim Curry; the turn-based combat has gesture-led actions crammed into every long-winded animation.

The camp, hyperbolic gestalt overcomes the slightly shoddy production visible in the animated cutscenes, use of bog-standard fonts, and occasionally unflattering close-ups of sprites. There’s a fart joke after defeating one of the bosses; this isn’t a game to be taken seriously. For further proof, look to the “Troll” move, which attracts the enemies’ attention by performing signature dance moves from Gangnam Style. As with all the best-worst low-budget movies, this is just harmless entertainment that’ll surprise and sometimes amuse.

Look to the “Troll” move, which attracts the enemies’ attention by performing signature dance moves from Gangnam Style.

That’s what Fearless Fantasy is at its best: a goofy pastiche of exhausting RPGs. Achieving this and maintaining it requires a careful balance of a lot of interconnected elements. This precarious circus act is most visible in the combat system, which combines turn-based decision-making with the frantic demands of a rhythm game. On more than one occasion the duct tape holding it together is exposed when the “grind” is hammered into its grindhouse sentiments.

The first signs appear when you’re given cause to question the superficiality of your mouse swipes that, supposedly, determine the effectiveness of your actions. An enemy punctures Leon with a lunging claw—hitting, not missing—but deals zero damage, despite your imperfect mouse swipes. That can’t be right. Yet, it happens again, and again.

This is the result of a combat system that has so many factors affecting each turn that it’s akin to a melting pot. There are armored foes to consider, vampiric health steals, several categories of creature with different weaknesses, poison, trolling, paralysis, revivals, resting, boss battle conditions, melee and ranged attacks; isn’t all of this enough? No. The whole point of Fearless Fantasy is to amp up all of its components to the point of absurdity. That’s fine at the start, when you’re overwhelmed with activity and can’t do anything other than thrash about in the drama. But for this to continue it has to avoid you ever thinking that you’ve done something before. The breaking point is conditional: It occurs if you hit a wall in progression and a loading screen suggests replaying previous levels to gain more experience.

But Fearless Fantasy positions itself as the antidote to this sort of tedium. Grinding to push numbers in a stat screen up is exactly what you don’t want when trying to be unashamedly goofy and weird. Grinding is repetitive and boring. Weirdness emerges in the unfamiliar and unusual. In principle, the two are not compatible, and that’s no different here. You may experience this, you may not; it’ll vary depending on your proficiency in combat.

Fearless Fantasy is that brand of weird that is trying to clamor too much attention. Like when The Flaming Lips announced they’d be releasing a 24-hour song on hard drives encased in a human skull. Or Damien Hirst’s range of diamond-encrusted infant heads. There’s too much of A Weird RPG’s genre mixing for the hell of it, and not enough of OFF and Space Funeral’s unsettling perplexity. Enter Skies is trying very hard to win the title of the weirdest RPG this year with Fearless Fantasy but its biggest mistake is in trying at all.