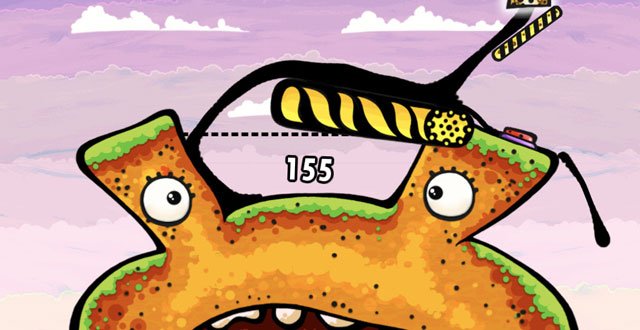 Maybe open with something about hunger? Too abstract. Maybe there’s something with oil. Feed Me Oil as a metaphor for conspicuous consumption in the first world. Hmm … no, that’s pretentious. All right, let’s skip the opener for now.

Let me get the easy part out of the way. “The objective is to get oil into the designated oil … feeding … area.” (I’ll come back to that.) “You’re given a set of tools—fans, magnets, platforms, to accomplish the task.” (Very Incredible Machine. Does that reference date me? People know what Incredible Machine is, right? You know what, forget it; let’s just forget that one.) “New mechanics are introduced every few levels.” (No, that’s way too dry.) “New wrinkles in the formula—” No, cliché. “But Feed Me Oil has a lot of tricks up its sleeve.“ All right, I’ll come back to this.

It’s cute, but is it just me, or does it just crib its notes from World of Goo? Yeah, the pitch-black oil looks like the Goo from World of Goo, and so do the colourful, anthropomorphized landscapes with goofy facial expressions. It’s worth mentioning. Is World of Goo a good reference point? But that’s just aesthetics. “But the comparisons to World of Goo stop there.”

Why should anybody play Feed Me Oil? It pretty much just exists for the type of person who likes this narrow genre. It is not a game that insists on its existing. It is the quiet guy at the party: he does not come to you; you go to him, or your friend says, “Hey, have you met Feed Me Oil? We took a few poli-sci courses back in college. Man, those were some crazy days. Hey, do you guys want something? I’m going to make a fridge run.” And in those five minutes you enjoy yourself, but there is nothing revelatory or especially interesting that sticks out. Maybe there’s something there: “Feed Me Oil is like that polite, quiet fellow at a party.”

That’s way too dismissive. I mean Feed Me Oil is well put-together. It’s not a bad game. There is craft involved. Some of the levels are great; some, less so. It does what it does, really well, and that’s worth noting. But how do I say something is “all right, I guess” in a way that isn’t so utterly lazy, that is competent, and shows a level of craft befitting the game?

Okay, time to write this thing.