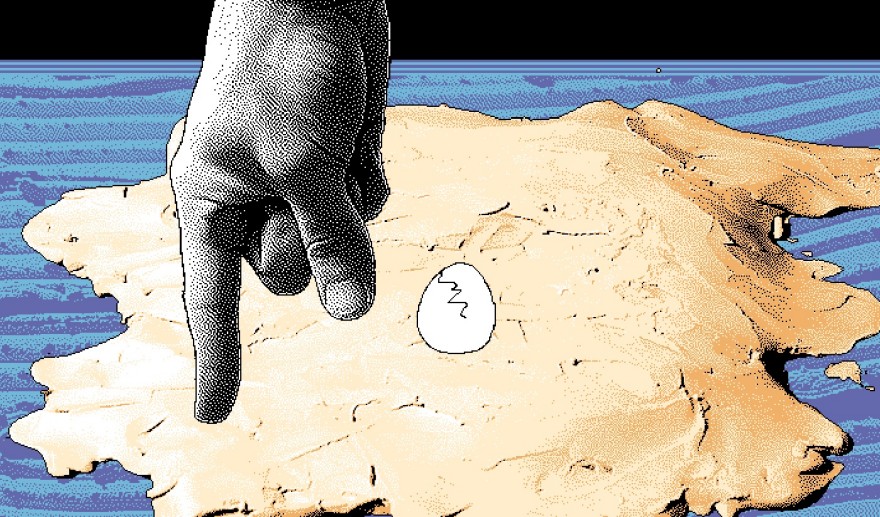 The unwieldy hand that you control in Weird Egg & Crushing Finger at first seems nothing more than the key component in one of Terry Gilliam’s absurd animations.

In fact, if the hand crushed with an open palm rather than a dainty prod, it would be only a slight variation on the iconic, destructive foot of Cupid that appeared so often in Monty Python’s title screens and sketches.

But it’s a prod, and a prod is more inquisitive and much less certain in its crushing capabilities than an open palm or foot. A prod bears doubt and can cause accidental mishaps. It’s the difference between curiously poking at a strange bug you found and stomping on it in a blind panic until it’s flattened into the soil.

That all you can do in Weird Egg & Crushing Finger is prodding is important because it reflects your uncertainty when interacting with the game’s world.

Holding such power in this world came with great responsibility.

As the yellow clay forms an island beneath your finger, surrounded by stripy water, you’ll start to dab the surface to see what happens. When the titular white egg appears in the middle, your prods crack it open to reveal a worm that wriggles around—your curiosity breeds life.

With that lesson learned comes the much harsher realization that you can also take away life just as easily. My initial playing of Weird Egg & Crushing Finger ended abruptly when I poked the worm, killing it, and then constantly prodding the colorful soul that appeared in its place in hopes of a resurrection. In a matter of seconds I had created all life and ended all life.

The implication of the prodding finger as an experimental touch and not a tool of destruction led me to believe that I should be more careful. Holding such power in this world came with great responsibility. Essentially, I was playing a god.

We often think of gods as being all-knowing, wise, and able to mold the world as they see fit. But what if that wasn’t the case?

I watched as a bi-pedal species of hunters, commoners, and sorcerers emerged from the worm. This was a cause for great joy. Then they built a little town and started to kill each other. Not long after this, a monstrous skull creature rose from the seas and began murdering the people. I sat there, not knowing what to do, deciding on whether or not I should interfere.

I felt terrible. It had got out of control, but I wasn’t to know what would happen. It makes you think. If there is a higher power, are they also fretting as I did, unable to control what their inquisitive prod had started?

You can play Weird Egg & Crushing Finger in your browser.