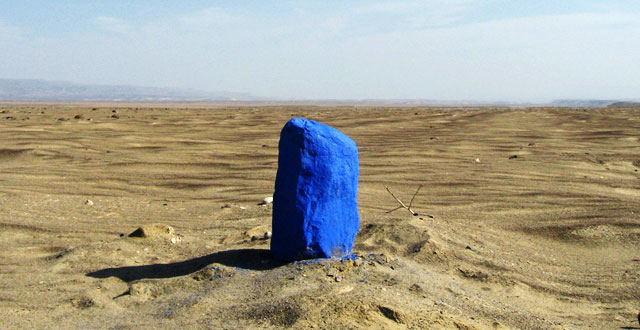 The Palace of Justice in Lima, Peru is near the town center. It was built in the late ’30s with a neoclassical style in mind. The authorities involved in the project wanted it to look like the Palace of Justice in Brussels or the Congress of Buenos Aires—but without the dome. Two white marble lions sit on its stairs, shining in the always-grey sight of Lima. The Palace of Justice is home of the Supreme Court, and in its basement is a jail for those awaiting trial.

I have never been inside, but I walk across its front wall each time I buy a videogame. Five hundred meters from the country’s symbol of justice is a store called Blue Powders (Polvos Azules) where you can buy all sorts of illegal merchandise.

You can spot Blue Powders whenever you go to the center of Lima. The building is next to the city’s most heavily trafficked highway, and its blue walls are the exception in the neighborhood. It was constructed in 1997 from an old textile manufacturer, when a group of traders was forced to move indoors and stay out of the streets. They sold clothes, music, and videogames at low prices.

Blue Powders has one floor, a basement, and a parking lot (on the roof). Inside all the walls are blue, as is the floor. There are 16,000 square meters and more than 1,000 sellers of stuffed animals, T-shirts of metal bands, acoustic guitars and action figures of wrestlers, among other things. The most important items, however, are videogames.

If you want to buy games, you look near the back entrance on the first floor. There are narrow passages here where you can find games from all consoles. The place is well lit and you feel safe. Each stand has a big LCD screen where you can try a game before buying it.

People don’t buy original videogames in stores because they are too expensive. And the companies don’t offer better deals because of the piracy.

“What are you looking for? PlayStation games? Nintendo games? Come and see without any compromise,” a girl says whenever I come across her stand. From the start of your quest in this blue maze, you encounter girls in tight outfits who try to sell you the latest games for each console. In a place with tens of vendors selling exactly the same thing, how do you decide to buy a game from any one of them? Approach a vendor and they show you their brochure; from there, you pick the one you need. If there is no stock, the cute girl tells you to wait some minutes as she goes to the warehouse where, apparently, there is a pile of every game on the market. And yes, most of the games are pirated.

Sometimes, it’s even possible to find games in the catalogue that haven’t been officially released. “We don’t have that game yet, but maybe next week,” a girl told me when I asked for Halo: Reach in March 2010. The game was released months later.

There are some sellers who have sealed original copies. What is startling is that most of the PlayStation 3 and Xbox 360 games are between $62 and $67, almost the same as in the U.S. But in local game stores, a videogame can cost around $100, because of the high costs on importing goods in small quantities. People don’t buy original videogames in stores because they are too expensive. And the companies don’t offer better deals because of the piracy.

There is almost no videogame industry in Peru. Even though Sony entered the market last year with PlayStation ads in the streets, there are no real game outlets in the cities, nor any console videogame developers that I’ve seen. But that doesn’t mean that there are no gamers. We have been there all this time.

That’s why it’s unbelievable that at local stores, a game console can cost more than $600. The recent trade agreement signed with the U.S. didn’t change that. Is piracy the only reason? Because of this situation, Blue Powders—along with its cousin, Pink Powders—is the place where poor and rich gamers go to find the latest games. There is always a great debate around corruption in politics in Peru, and many scholars say that our system is corrupted from within: we go and buy a game for only three dollars. Is there another way to play?