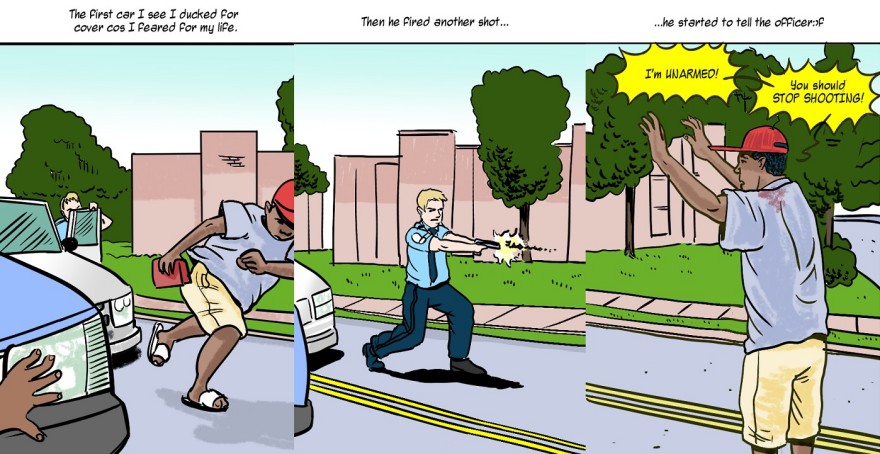 A new experimental project by Fusion, in conjunction with Empathetic Media and the Reynolds Journalism Institute, showcases the potential of using virtual reality and game development tools as an apparatus for reporting real-world events.

It’s called Ferguson VR, and it allows you to explore the eight eyewitness testimonies used in the case of Michael Brown’s shooting by police officer Darren Wilson in back in August this year. You don’t need a virtual reality headset to experience it, but it is designed for use with one, as well as a mobile phone.

When you start, you enter a reconstructed scene of the Canfield Green apartment complex in a first-person perspective. Guidance arrows lead you to beacons that each represents one of the eight eyewitnesses of the shooting; they’re located in the same spot the witnesses were at the time.

When reached, the beacon gives you a series of graphic representations of the eyewitness’s story that you can flick through, panel by panel. As is the case in the real eyewitness stories, these recounts of the events contradict each other on a number of details. “The aim of this piece is to compare and contrast the eyewitness reports—and allow you to see how this single incident has given rise to such a wide range of perspectives,” Fusion writes.

It’s primitive, but perhaps Ferguson VR is paving the way towards news reports being delivered with virtual reality in the future. And, if you really want to get wild, perhaps we could see more advanced takes on this idea being used in courtrooms for the jury to make better sense of a case. Stick with me.

Right now, courtrooms are steadily shifting towards using tablets to convey information to jurors, rather than relying on dozens of paper print-outs of maps and interviews relevant to the litigation. Technology is converging all of those separate pieces of evidence into one. So perhaps it makes sense to go a step further, and actually recreate testimonies for jurors to experience themselves, rather than trying to picture them in their heads.

If you want more evidence to support the idea that new technology such as virtual reality could play a complementary role in news reporting, there is some. The South China Morning Post has used Google Maps to offer a tour of the major sites of the Umbrella Revolution in Hong Kong, which took place between September and December 2014.

There are several scenes for you to navigate, with each one containing pictures, videos, and text that explains how each site looked while it was occupied by the protestors. It gives you a chance to map out the size of the protests, to get a sense of geography that you cannot get when watching the events unfold on television.

While these projects don’t live up to actually being at these locations, there’s a tangibility in using virtual reality and street level virtual mapping that can’t be found in other media. Perhaps, in the future, we’ll see technology being used to help us understand real-world events better than the reports in newspapers and on TV manage. It seems possible, at least.