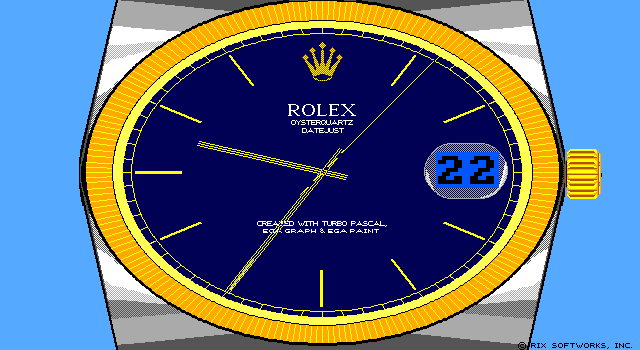 Archivist Jason Scott is attempting to preserve the inherent historical value of videogames. The Festival Floppies is part of this project. Years back, Scott acquired a load of floppy disks that a friend found in 2009 at the Timonium Hamboree and Computer Festival in Baltimore, Maryland. Back then, the disks were just a collection of software in a big plastic box. But now they’re The Festival Floppies.

Scott unloaded each of these disks, unearthing the software using a USB floppy drive and a program designed to pull stuff off the disks. All of the imaged files are available on the Internet Archive for folks to download and mess with. But if that’s not your thing, don’t worry—you can actually run more than 500 of these programs straight from your browser. It’s a valuable resource.

There’s a huge variety of programs in The Festival Floppies—a map of the United States that names each state and its capital; a Krusty the Clown screensaver; an early John Romero game; and a text file with jokes about lawyers. SimCity, which was released in 1989, is also in there somewhere. No real link exists between these programs, save that they were “sitting in a box on a vendor table in Baltimore in 2009.”

“There’s a sliver of interest in what could be called ‘old games’ or ‘retrogaming’ or ‘remixes/reissues’ and so on,” Scott said. “It’s pretty much only games, it’s pretty much roughly 100 titles, and it’s stuff that has seeped enough into pop culture or whose parent companies still make enough bank that a profit motive serves to ensure the ‘IP’ will continue to thrive, in some way.”

Many of The Festival Floppies programs have long been forgotten

But what about everything else? “There’s entire other experiences related to software that are both available, and perhaps even of interest to someone who never saw this stuff the first time around,” he added. That’s why The Festival Floppies matter, and why Scott took the time and effort to dust off these floppy disks and put ’em on the internet.

Some big Canon Influencer in the world has decided which of these programs deserve to be preserved and interacted with, stifling the history of human creation that is these sorts of floppy disks, and the programs on them. Many of The Festival Floppies programs have long been forgotten, but now they’re available again—for free—to be played with over and over again. Long live forgotten videogame history.