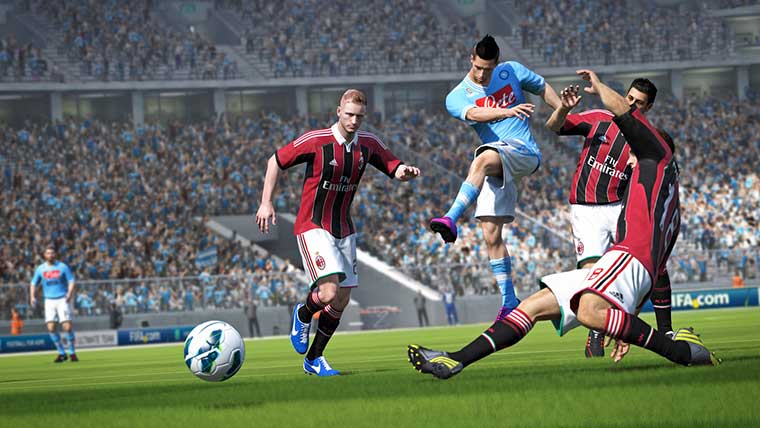 “Forgive me for rambling a little bit. I don’t often get to explain the depth and importance of these features.” Aaron McHardy, the gameplay producer for FIFA 14, is throwing a lot of information at me about how the various Capitalized New Things in this year’s game are going to positively affect the gamer’s experience of it. What’s led him on this tangent—and it’s a good tangent; I’m learning stuff—is that I characterized Precision Movement as an attempt to slow the pace of the game down. This is not wrong so much as it’s too insubstantial, like describing music as “something to fill silence with.”

Sports games are unique in that expectations exist not just in the gamer’s imagination, but in the tangible world.

McHardy, whose answer is marching on past the three-minute mark, is attempting to delineate the myriad problems he thinks Precision Movement is going to address, which leads him to talk about a handful of other new features, because there’s “not really one string we can pull to get the result that we want.” What I’m gleaning from his monologue is that these Capitalized New Things are not as simple and discrete as the blurbs on EA’s site would lead you to believe.

Capitalized New Things are what you see on the proverbial back of the box each year, the features that render each new iteration of a sports title not just a roster update with some window dressing, but a supposedly improved and more immersive gameplay experience. Sports games are unique in that expectations exist not just in the gamer’s imagination, but in the tangible world. Flaws in a game like FIFA are not just indicative of a lack of artistic vision or skill on the part of the development team, but of something being obviously and fundamentally wrong: virtual bodies that don’t move like real bodies, defending that’s either too perfect or too stupid. Capitalized New Things are supposed to make the game feel truer.

This year, defenders have gotten smarter. They’ll try to do what any defender does: keep an eye on the ball, the man near them, and anyone sprinting toward goal.

Two years ago, for example, McHardy’s team introduced Tactical Defending, which was an attempt to remedy the problem that defenders in previous iterations of the game were like homing missiles you sent screaming toward attackers. Tactical Defending made it easier to stay in front of opposing players, which turned tackling into a timing-based maneuver rather than a first, second, and third resort. It wasn’t a complete fix—defenders still stuck to strikers and midfielders as if tethered by yard-long spiderweb threads—but it transformed an entire phase of the game from something like pulling down a slot machine lever into a discernible skill.

Defending has received another overhaul in this year’s game. McHardy claims the marking this time around will be tighter, which is something he’s wanted to fix for a few years but hasn’t been able to because the technology just wasn’t there. FIFA’s new locomotion system—Precision Movement, a Capitalized New Thing—is step-based, which means it takes into account where a player’s center of gravity is with each stride he takes. Plus, players now plant into and push off the ground when they move, just like you or I do. The effects of this, to hear McHardy tell it, are diffuse, but one of them is that defenders will behave more like their real-life counterparts. They’ll be able to adhere more closely to attackers, but will also have to manage their inertia as they do so.

If you’ve ever played soccer—or any ball sport, really—you understand that getting around an opponent usually means you have to get him or her to lean in the wrong direction before accelerating past them. This was hard to do in past versions of FIFA, because players could start and stop on a dime. Getting past defenders often required enticing them to dive or run at you, then slipping past them with a dribble move. You could not, as McHardy suggests you will soon be able to, feint one way, get the defender to take a tentative half-step in the wrong direction, then knock the ball past them with a simple flick of the left stick. McHardy is pleased he can finally give players the opportunity to perform this sort of move, since it’s something you see all the time on actual soccer pitches.

One thing you don’t often see on a soccer pitch, unless it’s a beer league game that has carried on into the early evening, is someone racing through the heart of defense unmarked. This is something that happened too often in past FIFAs. Defenders would occasionally concern themselves with an opposing player in their immediate area as opposed to the guy running right down the fucking—well, shit. It was frustrating, is what I mean. This year, defenders have gotten smarter. They’ll try to do what any defender does: keep an eye on the ball, the man near them, and anyone sprinting toward goal.

Features come into focus while simultaneously coming unglued from simple notions of what they are for or specific problems they are meant to address.

Of course, there’s a lot else. Precision Movement doesn’t just affect defending, and the more intelligent defenses are going to have to deal with attacking players equipped with a bunch of new run types. I got the sense from McHardy that the pitch in FIFA is a lot like an ecosystem in that you can try to affect certain outcomes—say, you want to fix the system that determines who wins an aerial ball—but you can’t understand the full effect of your fixes until you play a bunch of matches. Building a sports simulation isn’t like building a bookshelf or a table in that you don’t know the exact implications of every manipulation you make to it. There are too many moving parts. I would imagine some of the things McHardy likes about the improved ball physics or the new Protect the Ball mechanic weren’t wholly intended consequences, the same as I would imagine his team have had to scrap or tweak some changes because in fixing one problem, they created an undesirable slew of new ones.

This is why, in the buildup to each iteration of FIFA, fans of the series try to understand what playing the game will be like through bullet-pointed press releases and trailers, knowing in the back of our minds that we won’t grasp what the PR stuff means until we get a controller in our hands, and even then, it’s going to take weeks and months to fully discern the meaning and importance of the Capitalized New Things. When Aaron McHardy says that he “thinks it’s hard to understand the depth and breadth of the features we build,” he’s talking partially about his anxiety that gamers will trust him and his team’s vision and skill, but he’s also speaking a simpler truth: it’s hard to understand how the Capitalized New Things are going to affect the way you play the game. It’s something you comprehend while sinking hours into the game. Features come into focus—oh cool, I can do this thing I wasn’t able to do before—while simultaneously coming unglued from simple notions of what they are for or specific problems they are meant to address.

McHardy is fond of referring to “jump out of your seat” moments, which are what he and his team use to measure the current build of the game they’re playing around the office. If the emotion they feel while playing the game isn’t sufficiently intense, they know they’ve got work to do. This logic is sound enough—sports are an exhilarant for both the spectator and the athlete, so a videogame about sports should evoke flashes of frustration and elation—but as with sports themselves, one learns to appreciate the minutiae of a game like FIFA.

It’s not a remarkable sequence of events, but it rings true.

This is the stuff that Capitalized New Things do that EA can’t stick on the back of a box: the way a player’s gait slows as he prepares to cross the ball, and how that slight slowing down allows a defender to catch up, stick his knee out, and knock the ball behind for a corner. It’s not a remarkable sequence of events, but it rings true. You realize that, on your next cross, you’re going to need another half-step of separation before you try to whip the ball in. The division between you and the virtual athlete you’re controlling becomes less noticeable. You begin to feel a little bit like you’re inhabiting the pitch. This is as satisfying as scoring a goal, even if it’s not as spectacular.

McHardy talks fast and excitedly in interviews because he’s trying—through language, which doesn’t totally work in describing something as tactile as playing a game—explain to you all the ways the Capitalized New Things are going to affect the gamer’s experience. But what he knows, and I think what’s served the FIFA series well over the years, is that you’ll figure out what the features mean to you as you explore the game. That’s half the fun.