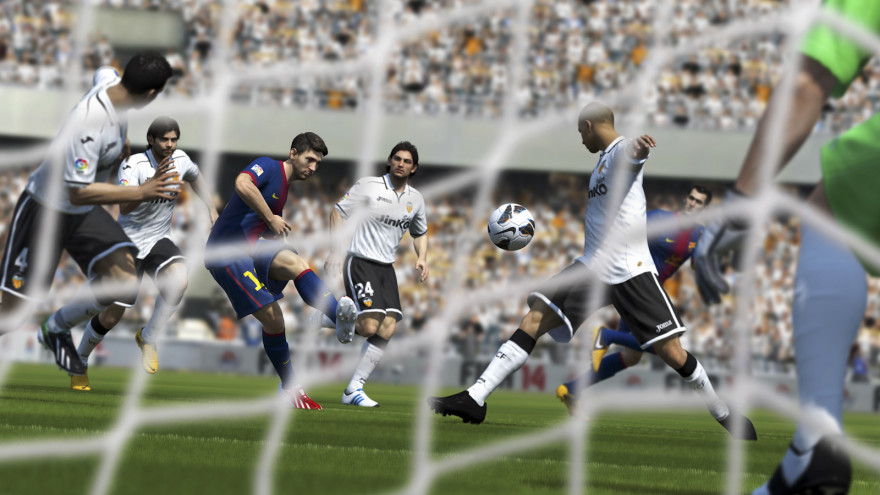 One constant, saving grace for a soccer-starved American was the EPL Review Show, which came like clockwork every Sunday night. That show was where I first saw Eric Cantona, David Ginola, and Bergkamp, and it was also where I realized that people could be named Jimmy Floyd Hasselbaink, Tore Andre Flo, or Muzzy Izzet. Generally it came on once a week, though cable was more of a formless wasteland back then and it may well have appeared as wee-hour fodder in whichever dark corners Billy Blanks wasn’t hustling Tae Bo videos.

Point being, back then, I tuned into English football each week much like one does a weekly hour-long drama: all the romance, poetry, and tragedy of a weekend’s worth of games, all the histrionics and spectacle, condensed into 60 minutes of the most relevant passages of each game and—importantly—using only the original match commentary. No slick-shirted former strikers in a studio. Just dulcet-toned Englishmen and glottal Scots, reacting in the moment. Anyway: absence, heart, fonder, and the like. The further away I was in time or distance from the game, the stronger my desire to immerse myself in it with each Sunday night broadcast, with each 101 Best Goals VHS or DVD I ordered, with each shockingly expensive UK football magazine I bought.

“Reality” had yet to find full materialization in the world of soccer gaming.

But for those lucky enough, there was also the inaugural installment of EA Sports’ FIFA series, first released in late 1993. Notable then for being the first soccer game to have an official license from the world’s governing body of football, FIFA International Soccer (also known colloquially as FIFA ‘94) quite literally offered gamers a different view of the sport: an isometric one, to be specific, rather than the top-down or side-view more common to competing titles. And though the game was officially licensed, real player names were not used, and it featured only national teams as it was pegged in spirit to the 1994 World Cup that was held in the United States. FIFA’s innovation even then was to gesture at a kind of immersive gameplay, but effected mainly through its modification of perspective: FIFA looked and played differently than other soccer games, though it was never any closer to simulating the speed, rhythms, patterns, and designs of a televised match than its arcade-style brethren. “Reality,” in the form of real player names, club teams, stadia, tactics and the like had yet to find full materialization in the world of soccer gaming.

Last week, the latest version of FIFA was released. FIFA 14 features, well, a host of “features.” That is, whereas your 1993 gameplayers might have been forced to convince themselves that a misshapen group of darkened pixels was Roberto Baggio’s famous ponytail, today’s players can marvel at the delicate rendering of Mesut Özil’s Buster Keaton-eyes as he darts around a stadium with what EA calls “True Player Motion,” employing “Human Intelligence” to pick out the right pass to an AI-controlled teammate, or choose to strike for goal himself with a dipping shot now-possible due to the game’s improved “Pure Shot” ball physics.

And these are all good things. I mean, to look at Mesut Özil is to imagine the somnambulist from The Cabinet of Dr. Caligari in a Germany kit, measuring the dimensions of the gentlest through-pass. We can all only benefit from being able to witness this repeatedly and on the console of our choice. What FIFA offers the player now more than anything else is precision—in fact, that’s another one of their new, named features: “Precision Movement.” But it is a precision both of movement and of ostensibly intangible things like “personality” and “style,” which get represented in the familiar tightness of Arjen Robben’s shirts or the languid dribbling of Mario Balotelli and Dimitar Berbatov. It’s this kind of attention—to seemingly inconsequential detail—that reveals exactly how essential those details are to creating an enjoyable simulation, but what’s more, it also reveals the amazing degree to which gaming for recreational purposes takes this act of re-creation and mirrored reflection as central to its aspect.

Actual gameplay rewards the patient, the ingenious, the slow builders of play. The FIFA series long ago left the province of the arcade in terms of speed and in-game action, but this year’s version grounds the players’ and the ball’s movements in reality to an ever-greater degree, which might frustrate those looking for quick-fast counterattacks. It’s not a problem though. As always, the game—much like an actual game of soccer, mind you—merely requires some time to settle into its rhythms. The details are finer—who doesn’t like a thumping outside-of-the-boot strike?—the range of scoring methods is greatly varied, and defending is much less of an all-or-nothing proposition when it comes to committing to challenging for the ball.

FIFA’s Ultimate Team mode is the ne plus ultra—for FIFA Ultras of course—of this new reality immersion tendency. Perched somewhere between fantasy sports gaming and Sports Interactive’s legendary Football Manager, Ultimate Team achieves what is perhaps an even more dangerously addicting feedback loop with real footballing world events as is possible. Did that player that you had your eye on rack up a hat-trick and an assist last weekend? Yeah, his price just went up—way up. This one-to-one correlation between the gaming world and the real world can be a blessing and a curse: if you’re the kind of fan that lives for transfer speculation no matter how specious, and can ruthlessly sell your team’s “talisman” for the right price without a second thought, welcome home, Harry Redknapp. But if you’re the kind that can’t bear to even glance in the internet’s direction after a poor result, you might not be able to cope with your team’s poor start being reflected in even a wholly digital world.

Watching the opening trailer to the game—narrated by Sir Patrick Stewart and featuring both scenes from last season in real world football (Dortmund’s Champions League disappointment; a particularly stunning van Persie volley) recreated within the game’s environment, and imagined highlights from the one just underway—I was reminded of those Sundays with the EPL Review Show. Part of the nature and attraction of a highlight is in recreating the exact moment of its happening and reliving it again. This was why it was so essential that the show kept original match commentary intact. The opening trailer, which gestured at more true-to-life sporting narratives than I’ve seen a FIFA title ever perform before, seemed a recognition of the fact that what drives our enjoyment of these games is our desire to recreate or reimagine the narratives that we see played out each weekend, played at and for our leisure: watching new stars born where older ones formerly burned brightly.

Back in the ‘90s, I would have said that my devotion to soccer was strong, but by today’s standards, it is weak, tenuous at best.

Back in the late ‘90s, I would have said that my devotion to watching soccer was strong, but by today’s standards, my “connection” to soccer, football, and England was weak, tenuous at best. The kind of immersion that is possible today was almost unthinkable then. Entire evenings can be devoted to Wikipedia-ing promising Belgian 17-year olds for your Football Manager squad, and the early mornings after that can be spent scouring fan message boards for pirated footage of your favorite club, off-duty and on summer tour in Asia, Africa, or the U.S.

But are we actually any closer? Are we immersed any deeper in our interests because we can follow our favorite players on Twitter and smile when they catch feelings about their FIFA player ranking? Yes and no. We’re certainly more connected to our favorite players and teams because we have more access to avenues of information than we did when information was relegated to an hour-long highlight show once a week. Personalities “run the roost” in sport these days; and given the wealth of fascinating ones, “long may it continue” (to quote two oft-used Britishisms). But the sweet-spot of “true fandom” doesn’t simply lie somewhere back during the times when I was forced to recreate the previous week’s glories in my own mind, or now, when I can let FIFA help me do the same, but rather somewhere in-between. We will always require a healthy imagination; it’s just that now we have a few more tools to help realize some of those dreams, however fantastical or digital.