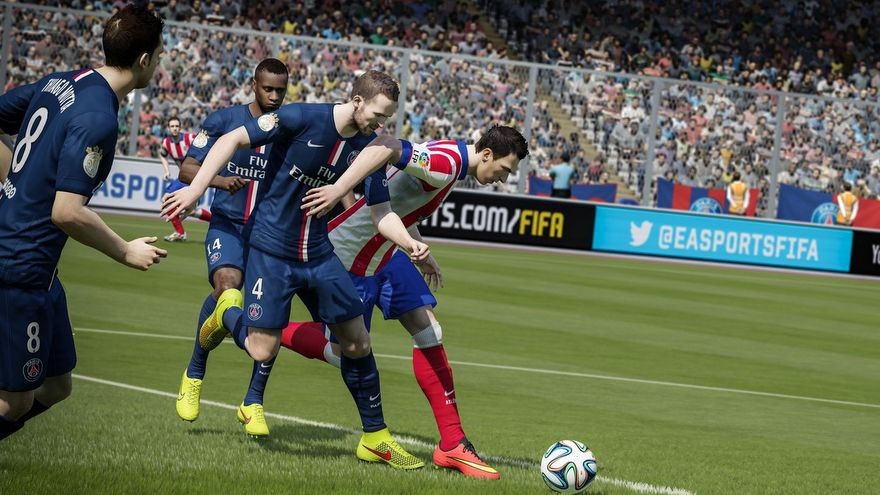 There’s this guy named Zlatan. He plays soccer. He is a marvel. He does things like this:

Sometimes, my son Ezra and I jump around the house listening to a song written about him, kicking a plush soccerball around like we’re ace footballers. Ezra is 3. I’m 30 years older but feel like a toddler jumping around with him. This is that song:

It makes me want to jump around gleefully like a three-year-old, singing “Zlatan Ibrahimooooovic.” I get giddy. I can’t wait to get home to play more. I spend hours online trolling through the Ultimate Team marketplace, trying to earn some precious coins to build my fantasy team, like I’m the Jordan Belfort of FIFA. I lean in during a close match. I jump up and dance when I score a goal.

I’m new enough to soccer that it is still very romantic. It’s a sports world that I didn’t grow up with, and it feels increasingly like the antidote to the hypermasculinity of American football. Soccer is filling a void left by the departure of the NFL, and FIFA 15 is propelling and stewarding my education.

I’m not so naive to think that the many problems of big-media sport are somehow missing from the world’s most popular game—FIFA itself, the governing body for the sport globally, is about as corrupt as it gets.

But the “otherness” of soccer in my life protects its luster. It’s a sick kind of sports orientalism, and I try to be careful to not oversimplify or generalize the culture of others. But I’m totally sucked in by the mythos of the passion and joy of soccer. I’m enthralled by the improvisational, jazz-like performance of Brazilian Joga Bonito, and wooed by the quintessential cooperativeness of Dutch Total Football.

FIFA 15 brilliantly captures that spirit of soccer, and makes it infectious. Even at its most competitive, and most passionate, there is an underlying joy and merriment resonant in the game.

That atmosphere of joy begins with the soundtrack. Licensed music has been in sports videogames for a long time, and for most of the contemporary games it serves to set an important cultural tone framing the experience. NBA2K has had its music produced over the past two iterations by Jay-Z (2K14) and Pharrell (2K15). NHL 15 has plenty of the sort of hard rock hits you’re likely to hear in an arena. MLB: The Show is steeped in alt-rock, for better or worse.

The music in FIFA 15 is eclectic, lively, percussive, and international. I find myself muttering gibberish to catchy songs I hear repeatedly because I want to sing along and I don’t know Portuguese. There’s lots of dance music in the soundtrack, and rightly so, since playing FIFA 15 is akin to dancing.

The deftness of feet—juggling, passing, sprinting, tapping—it’s an improvisational dance. Executing skill moves with the thumbstick and orchestrating brilliant passing exchanges feels like executing an intricate choreography. On my best days I’m like the Arthur Miller or Martha Graham of digital footie.

The perpetual thumping mechanical heart of FIFA 15 is passing, and it’s a testament to the design of the game that multiple strategies can be employed to move downfield toward goal. If your team has pacey wingers, you can play kick and chase to the corners, working down the field with aerial through-balls. Conversely, executing beautiful build-ups by playing some tiki-taka with a team is as fun as saying out-loud the words “tiki-taka.” Go ahead, say it with me. “Tiki-taka.” Fun, right?

Goalie play received an upgrade this year too, and the host of new animations combine excellently with newly designed ball physics to create some white-knuckling rebound situations in front of the goal. Many times I’ve gotten loose with a nice touch, driven a shot off the hands of the goaltender, only to have it bounce around in front of the goal as the defenders and my players scramble to get a foot or head on the ball. It makes for a thrilling moment, and is an accurate reflection of how goals in soccer are sometimes a feat of brilliant skill, and other times the result of a chaotic scramble.

It’s totally delusional, but FIFA 15 helps me to feel connected to the rest of the world. Soccer is still a second-class sport in the United States, despite being the most popular sport in the world. I’ve heard plenty of pundits decry the sport’s low scoring, and pace, as though American sports are far superior. I’m not proud of this kind of cultural isolationism.

Soccer is definitely growing in popularity in the United States, and certainly the last World Cup in Brazil drew in more spectators here than in years past. Nonetheless, growing up an American lead to me feeling detached from the vast majority of our world’s sports fans for whom soccer is the sport of choice. It’s like they knew a secret that I wasn’t invited to know.

The joy of soccer is no secret at all.

But the joy of soccer is no secret at all, and playing FIFA 15 has become my education. I’m learning about top players from Ultimate Team cards. I’m playing online matches against soccer fans from all over the world. I’m learning about tactics and techniques. I’m singing songs extolling the virtues of a Swedish dude named Zlatan, and I now know what those virtues are! I’m saying words like “tiki-taka.”

This may seem superficial, but in a lot of important ways—its music, language, representation, and sense of joy—FIFA 15 is a more cosmopolitan and worldly sports game. We could use one.