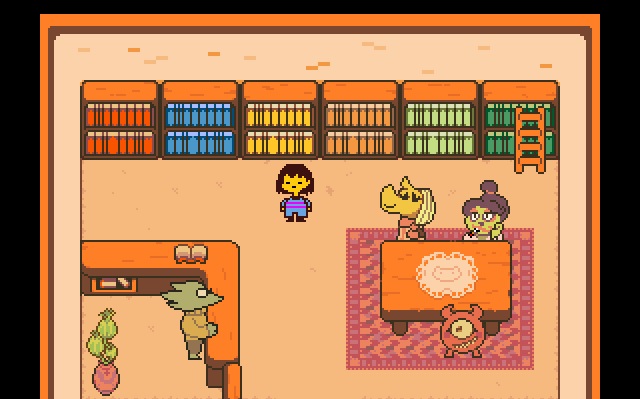 Kickstarter darling Undertale came into our lives in 2013 with the scent of butterscotch-cinnamon pie. It cradled us in its furry arms, gave us comforting and encouraging glances, before leaving us to rot—cold and alone—for two long years. Now, it’s finally returning next Tuesday the 15th, and I can already feel my heart swelling for the conflict resolution haven that is Undertale‘s world.

talking through your feelings with violent enemies

Playing as a naive human child, you find yourself trapped in the Ruins, an underworld where the humans banished all manner of monsters long ago. Luckily, early on in your journey you meet Toriel, a lamb-like mother figure who wants to do nothing but protect you from the cruelty of both worlds. To get back home, you must cross treacherous territory and it’s up to you to decide how you will handle all the monstrous curiosities you meet along the way.

You can either take the traditional path of fighting, leveling up, gold, and XP. Or, you say screw tradition, and blaze your own trail filled with patience, caring, and talking through your feelings with violent enemies. You can kiss them, chat them, cheer them. Or you can annihilate them. It’s your decision to make (though you can’t stop other animals from judging you for your choices). Either way, you enter into battle mode and must protect your heart (your very soul and health bar) from their incoming attacks.

As is clear from the release trailer, Undertale is not the kind of subversive game with a self-serious or self-aggrandizing attitude. But don’t let its adorable, gooey warm center fool you, either. Undertale has the potential to say something profound about nostalgia, growing up, and parenthood. Creator Toby Fox has designed a game that uses convention and genre to call the players attention to something both familiar and new.

Though the pacifist mode can feel repetitive at times in the demo, taking another pass with the guns a’blazin’ mentality doesn’t really make the game any easier or less repetitious, either. You realize instead of asking players to kill over and over again, designers could just as easily ask them to solve social puzzles and navigate emotional obstacles. It’s subversion of genre that still manages to feel organic and true to itself, inviting you to imagine more delightfully alternative forms of play without beating you over the head with it.

The new trailer teases all sorts of new whacky additions, like some sort of skeleton man whose sole purpose seems to exclusively revolve around annoying you randomly. Thankfully, the spider bake sale is still going strong, and we’re still left to wonder what baked goods made “by spiders, for spiders, and of spiders” actually tastes like. Most importantly, Undertale‘s bizarre core—which teeters between mothering and madness—appears if not wholly unchanged, still stronger than ever.

You can play Undertales’s old demo here. Be sure to check it out the Steam on its release day next Tuesday for the full game on Mac and PC.