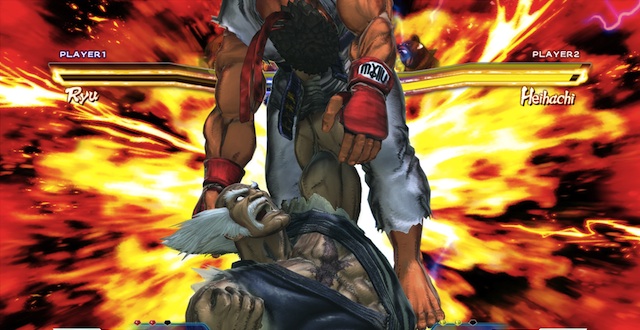 I’ve always hated fighting. It has never been my strong suit.

In my entire life I have experienced exactly two fights. Both took place in middle school. The first was a disastrous, humiliating slap-fight with a friend of mine during P.E. that landed us both suspensions in school. After that, I gave up on fighting. It had very little payoff.

But after a year of playing the likes of Street Fighter, Tekken, and Mortal Kombat, I found myself thinking quite a bit about combat. Special moves, combos, and strategies took up the space in my head my parents wished I would use for math formulas and vocabulary words. I paid careful attention to each character’s fighting style: Zangief’s brute-force method, Nina Williams’ agile acrobatics. Eventually I internalized the moves I might be able to pull off myself, and concocted a fighting style that I believed I would use, should the situation ever arise.

It did, of my own volition. As my friend Blake and I strolled around the block, Adam and a group of classmates wandered into view. Adam was something of a bully. He was vindictive and self-centered. So was I. We all were. We were middle-school kids. I do not remember what he said to us, but I remember warning Adam that if he didn’t “shut up” I would have to fight him. A look of glee on the faces of his friends.

“Follow me,” I said, and directed Adam, his four friends, and Blake to an abandoned carwash—a private place to try out this theoretical fighting style I had come to believe so strongly in. Here is what I thought would happen: His friends would sit in the background, raising and lowering their fists while shouting chants that would mix into the background as we fought. I would begin the fight by pulling off a signature Tekken move: the knee to the head. Adam would fly backwards and land on the ground, at which point I would pin him to the ground and begin to wail on him.

That is not what happened.

Here is what happened: As I asked his friends to watch at an adequate distance, they pushed me forward and Adam began to wrestle me to the ground. I attempted to grab his head and force it toward my knee, but this was a real person whose will controlled his appendages, not a computer-generated character. He preferred that his head remain upward, separate from my knee. He placed his large hand over my face, forcing me to my knees, and then toward the ground. He punched me several times in the back as I lay there. The fight ended only after I screamed, “Okay, stop! Gosh!!!” I haven’t fought since.

In reality, I’m going to need to beat a person.

I’ve avoided fighting videogamesas they have become more and more complex—not to mention unable to teach me actual fighting moves that I can use to defend myself in an abandoned carwash. But Street Fighter X Tekken has the potential to attract wayward fans of the genre, particularly those who grew up learning and discussing special moves with their friends between classes. It’s a pairing that is unexpected enough to demand attention. In one corner, Street Fighter: a motley crew of hand-drawn fighters who throw fireballs and engage in fast-paced blows, each a more fantastical stereotype than the last. In the other, Tekken’s more disciplined collection of polygonal men, women and animals, each carrying real-world styles and believable personalities.

The most noteworthy new feature is the “gem system” that allows players to customize their characters. New players get training wheels in the “assist” gem, which grants easier special-move inputs, automatic blocking, and automatic escapes from throws. The catch is that more experienced players, who no longer need training wheels, can use other gems for a greater net advantage: more health, more speed, more strength.

Beginners can also press the thumbsticks to execute automatic combos: two quick punches to the face, a knee to the abdomen, and an uppercut that sends the other player flying. But these combos are nothing compared to the kind of thing an expert can pull off while only half-paying attention. I found this out the hard way. After beating the game’s story mode, I ventured into the online multiplayer mode. I was particularly interested in how it simulates the arcade experience by throwing you into a lobby of up to eight players, each waiting to take a shot at the winner.

After joining a lobby of four people, I watched with my mouth open wide in amazement as two players mercilessly beat one another with long streams of connected punching and kicking. Each move was purposeful and masterful, leading seamlessly to the next. It was three minutes of painful foreshadowing; a glimpse of what was about to happen to me.

Here is what happened: The other players patiently watched from home, keeping silent as the round began. The soundtrack cheered me on as I managed to land two light punches at the beginning of my first round, what I thought would be the beginning of an incredible string of body blows. But I was quickly launched into a glorious juggle combination of roundhouse kicks and villain M. Bison’s flying horizontally across the screen. I got up and attempted to jump and evade my opponent, but was met in the air and thrown across the screen. Afterward, the winning character made fun of my overweight character’s jiggling fat.

I had mentally prepared for the battle that would face me in Street Fighter X Tekken. I had, in fact, been assured by the ad campaign that this game would make it possible to become a truly great fighter—to have a chance at success. But beating the game on easy can only do so much for my self-worth. In reality, I’m going to need to beat a person.

That never happened. As much as I tried to use assist gems and special beginner techniques to my advantage, it was the hardened, experienced, strong players who won. Every time. Street Fighter X Tekken is an enjoyable enough game, I guess. But for guys like Adam, it’s even better than an old abandoned carwash. It’s a place where people all around the world can watch as he wails on me all over again.