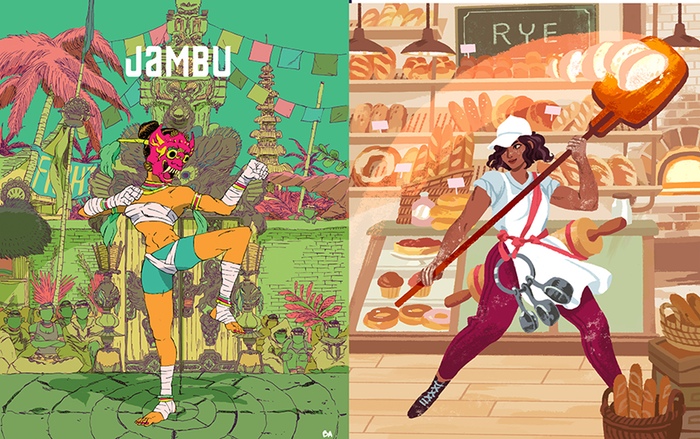 When it comes to the hypersexualized representation of female bodies in videogames, fighting games are known to be some of the most egregious. With each new Soul Calibur and Dead or Alive, female characters seem only to get boobier and boobier, while their clothing further evaporates into thin air.

Often, the counter argument to this observation is that the men in fighting games are hypersexualized too: their burly manliness just as exaggerated as the boobiness of the female characters. Yet, as Anita Sarkeesian pointed out in a talk recently, if men in fighting games were being sexualized in the same way women are, we’d be seeing a lot more dick-and-ball physics. Or, if you want to get literal, some sort of pec muscle-flexing physics. As it stands, neither dick-and-ball nor pec muscle-flexing physics exist. But boob physics are standard practice.

I rehash all this not to start a petition for dick-and-ball physics, but to demonstrate that our fighting characters could really benefit from some out-of-the-box art direction—regardless of gender. Aren’t we getting tired of seeing the same exaggerations in both male and female bodies?

None of this is to say that the bodies of fighting game characters need to look realistic in any way, shape, or form. But how about some variety in the kinds of exaggerations we choose to depict? Like, say, a male character so wiry and thin that he actually disappears when he’s in side profile. Or a human version of a Russian Matryoshka doll character who has smaller sized minion versions of herself to send after opponents.

A Kickstarter campaign for a zine project called FIGHT! depicting a large variety of original female fighting game characters shows just how much we could benefit from atypical representations. Featuring 36 artists and 44 pages total, the zine will pair off two female badasses against each together, each in the classic fighting game VS stance. Every character will get her own origin story to go along with her creative design.

Looking at these awesome range of characters, my mind races with the kind of powers that would be granted each of them in an actual videogame. One fighter in the video, Zee, appears to be a dystopian version of Nicki Minaj, with a bodacious figure and larger than life hairstyle. Perhaps Zee would stun opponents with the ferocity of her rap game. The undead Lich Lord-esque figure, Miasma, would presumably have a soul-eating move, draining opponents while gaining back some of her own health. I mean, there’s a goddamn crab-lady named Hermina. The possibilities there are potentially endless.

There’s more than just diversity in representation here (though, that’s pretty great in itself). There’s a breadth of creativity in the zine’s illustrations that could be translated to more variety in the (slightly stale) fighting game scene. Because it’s not just women who need a bit more diversity in how their bodies and characters are represented. I like rippling abs just as much as the next girl might. But different types of bodies and characters could mean a larger variety of mechanics.

And, frankly, I’m tired of the powers that come with bulging breasts and pecs. Sign me up for Hermina, the hermaphrodite crab-lady’s unstoppable pincer abilities any day.

Go support the zine on its Kickstarter and learn more about the artists here.