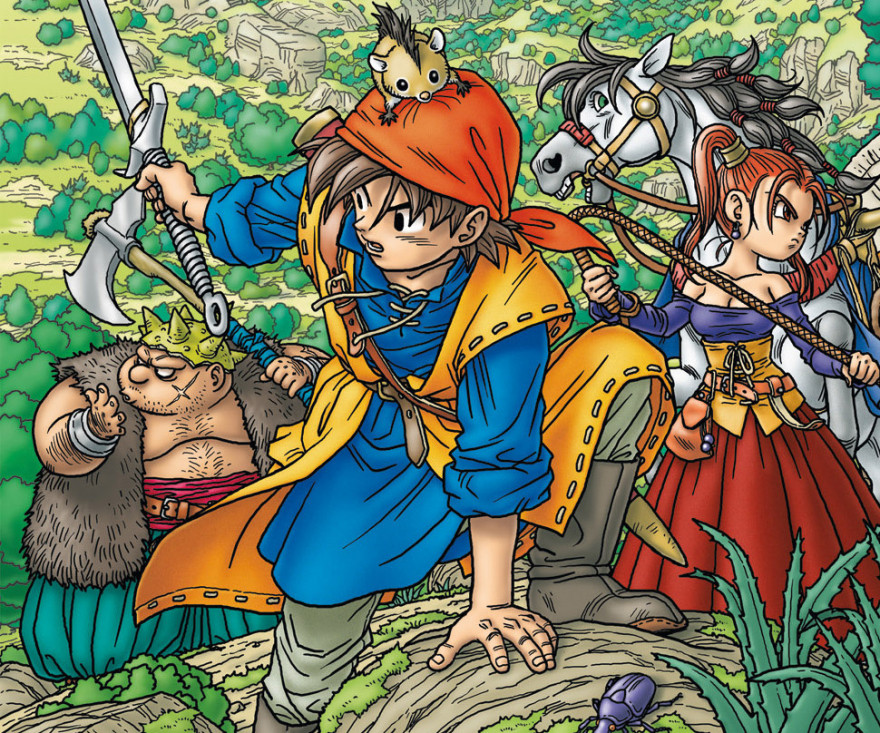 It’s difficult to say something singular about games whose playtimes balloon out to 100 hours and longer. You could actually read War and Peace or Infinite Jest in that time. You could watch a big chunk of your Netflix queue. You could listen to every long-winded Wagner opera twice. You could watch the Star Trek series. It is in no uncertain terms a Life Event to play a JRPG like Dragon Quest VIII. On those timescales, it becomes more like a ritual than a game.

Although Dragon Quest VIII first came out in 2004 for the PS2, now we live in an age where you can touch (but not feel) this particular Life Event on iOS. Excepting a spit-and-polish job on its sprites and an objectively weird portrait-only interface redesign, you could mistake this version of Dragon Quest VIII for its predecessor, which is, as most JRPG loyalists will tell you, a very good thing.

As I mash the attack button waiting for this fight to hurry up already so I can get on to the next one, existential crisis seems inevitable. Dragon Quest VIII is profoundly repetitive, and not just in the actual actions you take. Silent protagonist; verbally-quirky sidekick/consummate comic-reliever; a pair of outsiders suffering from a bit of “She turned me into a newt!”-type shenanigans; and, of course, the bad-guy-who-was-only-made-bad-by-the-bigger-badder-bad-guy. In other words, the JRPG character archetypes. Its mechanics are equally iterative: randomly occurring turn-based battles that give experience points, drop items, etc. For the truly uninspired, Dragon Quest VIII’s battle menu includes a “Fight wisely” option that hovers ominously over the battle menu from the beginning of the game, a bit of visual foreshadowing that you’ll be able to spend a fair amount of this game dippy-birding away at that part of the screen. I found myself drumming out elaborate patterns in certain moments, hoping to discover a fast-forward, a level-up glitch, anything other than Blue Goo #1,023. But that didn’t happen. Sure, Dragon Quest serves up a set of buffs, spells, and roshambos that stir in chances for a little tactical diversity, but they’re more on the order of X-Attack and its ilk from Pokémon: There if you want it, but hardly ever worth the turn you could have otherwise spent mashing Attack.

JRPGs resemble one another because people enjoy variations on themes.

Now, if you’re a JRPG fan, let me repent for that last paragraph. After all, there is another way of reading this: Meaning is both lost and created through repetition. JRPGs resemble one another not because people enjoy derivativeness (they don’t), but because people enjoy variations on themes (they do). Our neural pathways develop and get stronger through repetition. Blue Goo #1,024 and #1,025 may not be different from their predecessors, but they don’t need to be: I’ve changed since the last time I fought them.

First impressions may matter tremendously in a haiku, but they’re a lot less important when you’re slogging through an epic. And Dragon Quest VIII operates on epic timescales. You can’t judge it on the basis of a single moment—say, as you’re killing Blue Goo #1,026 and #1,027—because that moment doesn’t matter except in its context. The ritual of each battle anticipates the next one and recalls those that came before—the ones where you were weak and made mistakes—using the same music, the same animations. But if you don’t know what it was like to do that as your past self—if you hadn’t killed Blue Goo #81 before you killed #1,028—the fight wouldn’t seem like much at all.

Of course, whether you prefer to think about Dragon Quest VIII as an exercise in idleness or a sacred ritual likely depends on the amount of time you’ve invested in this game and others like it. Without the weight of tradition behind it, flattening out your finger hitting “Fight wisely” just feels like cow-clicking. Personally, I’d rather spend that time elsewhere.