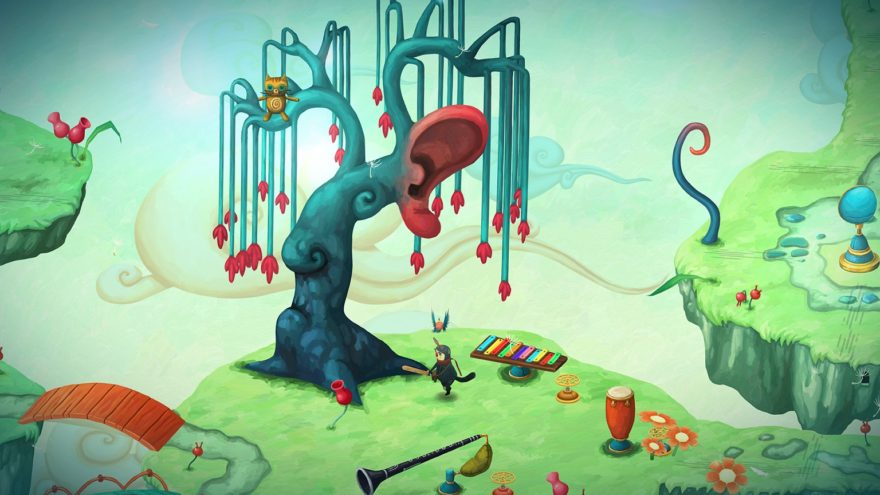 At last, several months after first revealing concept art and screenshots for its dreampunk game Figment, Danish studio Bedtime Digital has more to show. It comes in the form of a three-minute long video, which features not only the game in action for the first time, but also lead designer Jonas Byrresen talking about where the idea for Figment came from.

As might be expected, Byrresen reveals that Figment was conceived after the studio looked at what people who played their debut game, Back to Bed (2014), had requested. Specifically, it was the chance to walk around and look at more of Back to Bed‘s world, which comprised surrealist, gravity-bending dioramas—the kind of virtual space René Magritte would make. And so it is that Bedtime Digital has leaned into that request when making Figment.

Rather than a puzzle game, as Back to Bed was, Figment is an adventure game that takes place across an interconnected world. All sky islands and bridges, Figment‘s world is actually the manifestation of someone’s subconscious—a psychogeography as suggested by the Max Ernst-like fantasy blush and Alice in Wonderland (1951) color scheme. It’s a place where apples are halved and turned into domestic layouts with tiny windows and doors, and tea pots are similarly given an architectural function, as if the old woman who lived in a shoe (you know, from the nursery rhyme) had inspired a whole generation of architects.


Other than swirling flora and windmills, the most defining aspect of Figment‘s world is the musical instruments you can spot scattered around the place. Byrresen explains that the person whose head you’re inside is deep down a very musical person. But on the outside world this person hasn’t really had the opportunity to show that side of themselves, “to live out their musical dreams,” as Byrresen puts it.

He doesn’t say much more on the subject than that, but the impression Byrresen gives is that you’ll be connecting the various islands in Figment by way of creating music. In the video, you can see the character (what the hell is that anyway?) turning valves to affect where clouds appear, and in the concept art there are signs that trumpets are used to create bridges made of brass. There are also vilains that will try to stop you who, following the example of Inside Out (2015), represent inner emotions like doubt and fear.

“[The villains] are cowards, so they keep running away,” Byrresen said to Polygon earlier this year. “Each world is about finding a way to corner them, and then finally having a chance for defeating them. “You need to face your fears. That’s the way you overcome them.”

Figment is coming to PC, PlayStation 4, and Xbox One in 2017. Find out more on its website.