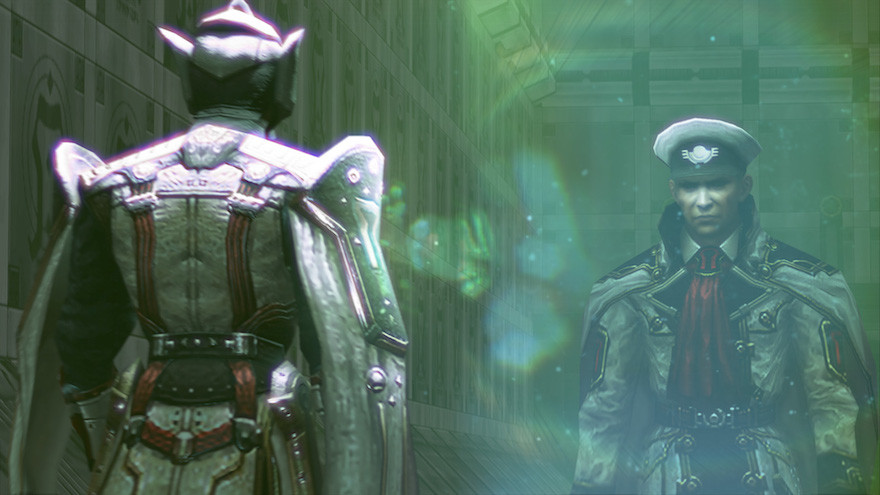 Final Fantasy Type-0 HD’s opening scene shows a teenager slowly dying. He’s in terror, leaning against an armored and blood-soaked chocobo—a cutesy giant chicken, basically—as the city around him burns and gunshots rattle in the distance. He whimpers “I don’t want to die” moments before doing so. The chocobo cries out in apparent despair. In a later scene, the player talks to a moogle, another Final Fantasy mascot. This one looks a little like a mouse crossed with a teddy bear. It, like the chocobo, is dressed for war, steel plate contrasting with its circular pink nose and little bat wings. The moogle describes how the young soldiers it commands must enter combat so quickly that they don’t have time to be properly trained. The cartoon creature, sad about all the death it has witnessed as it sends more and more groups of children to the slaughter, says, “It’s a tragic cycle, kupo . . .”

The Final Fantasy series has dealt with war before. The stories in Square Enix’s role-playing games typically follow a plucky group of (mostly teenaged) characters fighting off forces of evil. In many cases, this involves taking on sinister armies of medieval-ish knights or groups of sci-fi future soldiers. Type-0 is different from its predecessors, though, in its unique willingness to subsume the grit and misery of real-world combat into its otherwise sugar-coated, anime pop aesthetic. Whereas previous games from the series abstracted warfare with bloodless death scenes and vague mentions of strategic maneuvering (VII and VIII come to mind), Type-0 attempts to marry its most cartoonish tendencies with no-nonsense military conventions. Screens where chunky arrows stab across sepia-toned maps show the tactical approach of armies; some mission objectives include disabling anti-aircraft guns and weapon-jamming equipment; a 24-hour clock marks the time of battlefield actions during cutscenes.

Even while assuming the language of war, Type-0 filters its subject matter through the sort of colorful, instantly merchandisable assortment of characters Final Fantasy is known for. The player takes on the role of one of fourteen warrior students, their shiny, angular haircuts and combat moves meant to highlight not their role as child soldiers, but the impeccable design of their school uniforms and iconoclasm of their weapon choices. These characters burst onto the battlefield striking anime poses, ride fluffy chocobos into fights against combat-chic robots, and take orders from ninjas and moogles. Moogles who float in the air, capping admissions of mortal despair with “kupo” as catchphrase punctuation.

This disorienting mish-mash of military and cartoon isn’t damning in and of itself—approaching war from a seemingly naive perspective is what made works like the 1988 film Grave of the Fireflies and J.G. Ballard’s Empire of the Sun so disarming and trenchant. But Type-0’s story is too much of a mess to make much of anything out of itself. Its world-building is impenetrable with exposition that, while more than willing to offer up plenty of details regarding its fictional setting, is loathe to explain what any of them actually mean. As best as it’s possible to sum up, the game’s primary characters belong to a group of military cadets called Class Zero. Class Zero works for Akademeia, which is part of the Rubrum Dominion and is at war with The Militesi Empire, a militant nation that invades its (apparently more prosperous) neighbors after years of suffering from a magic-related economic recession. In essence, and all proper nouns aside, Class Zero are heroes fighting to liberate their country from more-or-less fascist invaders.

As the cast progresses on its campaign, the story alternates between providing either too much or not enough detail. Narrative twists wrench the plot free of anything like coherence at frequent intervals (with the final act’s surprises serving as the worst offenders) and characters attempt to compartmentalize their situation with pseudo-philosophical musings (“Follow the path in life . . . to find your death!”) meant to wrap the confusion in a veneer of poignancy. All of the voiced dialogue is delivered in awkward, painfully slow speeches in which most every line is lengthened by audible ellipses or peppered with translation missteps. (The character Nine ends nearly every sentence with an agonizing “yo” or “hey,” regardless of context.)

This is all too bad because, when Type-0 stops trying to tell its story, it’s a fine game for punching, stabbing, and electroshocking enemies. In combat—which sees the player character squaring off against opponents in real-time, casting spells and dodging hits with timed button presses rather than paused menu selections—the frustration of the plot falls away to reveal something honestly compelling. Swapping between the Class Zero students to make a trio whose skills complement one another; looking for opportunities to stagger monsters and soldiers by attacking when they’re vulnerable; levelling up or swapping out active skills and slapping on new equipment—Type 0 blends tactical consideration and reflex-based action play to create some of the long-running series’ most satisfying fights. Knee deep in a tension-filled battle between three cadets and a vicious monster, it’s tempting to see the game as a fitting evolution of years of Final Fantasy entries, its mechanics striking an excellent balance between direct character control and role-playing game statistics management. But then another cutscene—another indiscernible story beat that fumbles through a study of the delicate nature of life, death, and war with no clear purpose but to subvert a cartoon mascot by coating it in gore.

There’s a great urge to celebrate what Type-0 is trying to do. There’s a temptation to laud the concept of a series best known for simple fantasy making an effort to grapple with the seriousness of a topic of which it has skirted the significance for so long. But Type-0 shows that Final Fantasy, despite its best efforts, probably doesn’t know how to grow up in the way it wants to—that it can only grasp at greater dramatic impact even as its battle systems are further refined, its attempts to dig something out of the ancient muck of a subject as heavy as war itself constantly curtailed by concessions to the iconography of its past. Bloody chocobos, tactician moogles, school kids with great hair delivering barely coherent monologues on determinism while fighting to overthrow anime Nazis. It’s Mickey Mouse and Goofy fixing bayonets before going over the top; it’s Elmer Fudd field dressing Bugs Bunny’s buckshot corpse; it’s a well-animated Saturday morning cartoon about dead children that isn’t exactly sure what it’s trying to say.