You notice a few things right away about the hero of Final Fantasy VIII. The first is his extraordinary reticence. He has to hear a question two or three times before he forms his response, which is often, famously, “…Whatever.” He turns his back on people as they talk, staring into his own thought bubbles. When he turns back around, he usually asks them to play cards.

How can this be the guy who saves the world? That’s the question FFVIII puts to us, and there’s something wrong with it for asking. It’s a blockbuster that balances every scene of sweeping action with one of excruciating inaction. No game has ever sold so many copies by telling a love story, or taken such relish in prolonging every awkward silence and missed signal in that romance. It’s the Playstation’s great cringe comedy.

Few games dare to be awkward, and none have done it on the same scale. FFVIII is a four-disc epic about high school mercenaries fighting a psychic traveler from the future who wants to destroy linear time. It has its own collectible card game-within-a-game, Triple Triad, with shifting regional rules and obscure questlines. Flying cities crash into each other, monsters rain down from space, and no expense is spared. But what makes the game original—even charming—is the juxtaposition of its elaborate setpieces (still among the best in the series) with scenes of social disaster.

There’s the protracted scene early on when an instructor named Quistis takes our hero Squall to their school’s version of Lovers’ Lane, then begins sighing about her failures as a teacher. “Go talk to a wall,” he advises her. There’s the bit where he storms out of a room after hearing that his old rival Seifer may have died, distraught after realizing that he himself will someday become “past tense.” (“Are you mad?” someone yells.) And there’s his way of demanding to play cards at the worst times: “Oh…I see…really?” asks his long-lost adoptive mother.

It is, in the end, about a shitty person becoming less shitty

There’s the part where he rescues love interest Rinoa from the void of space. In a long, dreamy sequence, her space suit rises from the bottom of the screen and tumbles toward the camera, framed against a curtain of stars that looks like a graveyard for every ellipsis wasted in the game’s dialogue. When Squall jumps out to catch her, the game makes its own creative leap, switching to first-person controls for the first and only time. It’s an unabashedly sentimental, enormous moment, backed by lavishly produced music and cinematics, the work of a studio at the height of its powers. And at the end of this triumphant episode, Squall and Rinoa find themselves safe in another ship, and she asks him to hug her: “I need to know that I’m alive!” And he flat-out refuses. He will not budge on the hug issue. It is, somehow, the most unbelievable thing in their entire space adventure.This is the game’s unusual, not infrequently hilarious rhythm, and I’d enter it as evidence that FFVIII is interested in telling a story in a way that most games are not. Marcus Fenix doesn’t get along with his dad, Joel lies to Ellie, Commander Shepard tries to get the wrong alien into the hot tub on his space-yacht, or whatever—none of gaming’s stars really fuck up in the sight of the player and God like Squall does. They make forced errors and sometimes they hold their heads in their hands and ask whether it was all worth it. But it’s only the cool man’s passing melancholy, which departs before it does damage to his reputation. 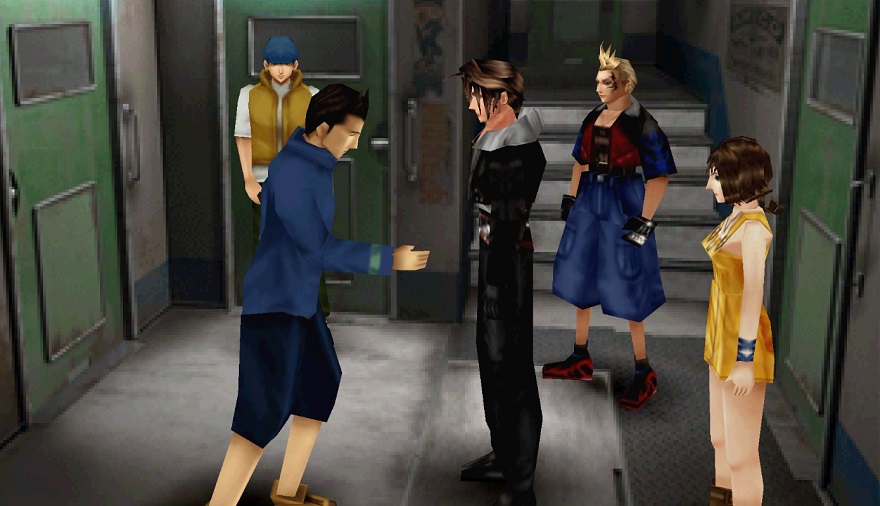 FFVIII’s script isn’t what you call polished, and I’m not suggesting its re-release should have snatched a Game of The Year trophy out of the hands of The Last of Us. But in its way it’s a brave game. It has an unmatched stomach for awkwardness, and it has the gall to deny us the expected narrative beats. It dangles the perfect resolution in front of us, then pushes it away again and again. It is, in the end, about a shitty person becoming less shitty. But that story doesn’t take the shape you expect at all.

When FFVIII came out, I joined my fellow middle-school critics in panning it for having a lame hero and an obscure plot and for turning into Castlevania at the end: for pretty much all the reasons that I like it today. We didn’t get that Squall was meant to make us cringe, to pick apart the mystique of the loner antihero, the guy who literally subscribes to “Weapons Monthly.” That guy turned out to be more traumatized than tough, and as likely to freeze up as to make the right call—at one point, his comrades have to berate him into saving his own girlfriend. He was designed to be less than cool, which is not a concept that survives many conference rooms in this industry. It didn’t survive in the Final Fantasy series itself: one game later, our hero was a brave little monkey-man introduced with a platitude (“You don’t need a reason to help people.”) How could that guy not save the world?