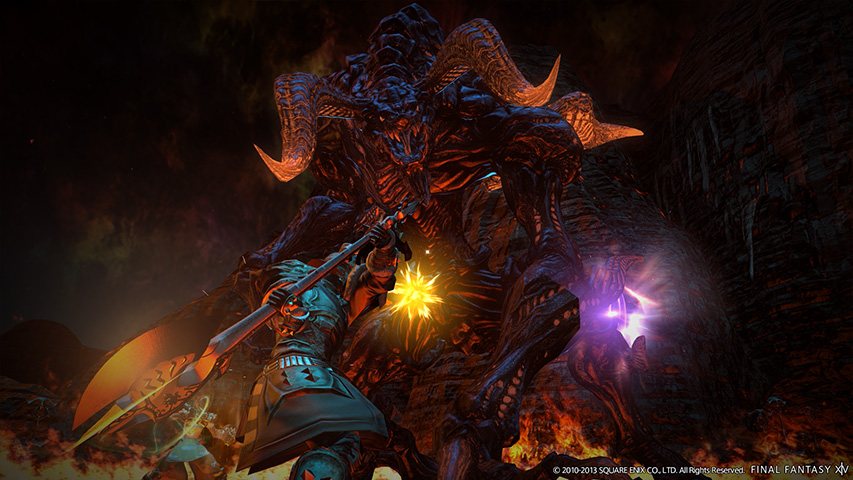 As the game cannot actually be completed in any meaningful sense as a completely single-player experience, this praise is not entirely unambivalent, but neither is it meant to be disingenuous. I’ve spent far more time playing Final Fantasy XIV alone (well, companionless anyway) than as a part of a group, and I would recommend it without reservation to any RPG fan.

As the emphasis on the “Realm Reborn” part of the title on the game’s packaging reflects, the numbering of the Final Fantasy games has become a bit haphazard. The upcoming Final Fantasy XV was originally announced back in 2006 as Final Fantasy Versus XIII—not to be confused with Final Fantasy XIII, a separate game which has spawned two sequels, Final Fantasy XIII-2 and the upcoming Lightning Returns: Final Fantasy XIII. The release of Versus XIII was, however, so long delayed that it was finally decided to give the game its own number. The fact that so much of this is common knowledge is testament to the ongoing fervor this series inspires.

Amnesia has always been a key storytelling trope in RPGs, but Final Fantasy XIV takes it to a new level. The entire world of Eorzea has suffered a cataclysm and survived, but no one remembers exactly how. There was great sacrifice, but the key figures are unclear. The world ended, and then everyone went about their business the next day.

It’s a good starting move for a game that would like players to largely forget that it’s a relaunch, a second attempt. We can almost pretend that the 2010 release never happened. It was so, so long ago.

In a sense, it is impossible to comprehensively review a game like Final Fantasy XIV.

There are 950 possible advancement levels. You’re already behind.

The sheer scale of the game is the clearest obstacle. At the start of the game, the player can choose to create a character from five different races, each of which contains two genders and two ethnic subdesignations.  There are eight combat classes initially available, and the player’s starting class determines which of the three major cities their character will be assigned to for the first part of the game.

While the main storyline quests for each class (that is, from each of the three starting cities) converge at level 15 or so, each class has its own unique set of quests. Additionally, once the player reaches level 10, the option becomes available to switch combat classes (and pursue each class’s unique set of quests), as well as to explore an additional eight crafting classes and three gathering classes.

Finally, at level 30, the eight combat classes can be evolved into one of nine jobs, depending on what additional leveling the player has done in secondary combat classes.

With advancement currently capped at level 50, multiplied by 19 distinct classes, that’s 950 possible advancement levels. None of which happen on their own, so get cracking. You’re already behind.

This may go without saying, but when you start Final Fantasy XIV, one of the most important decisions you’ll make is which corner of your life will be cordoned off and put away because you just are not going to have time for it any more.

I’ve been playing the game for more than a month and I still haven’t completed the single-player storyline.

It is, of course, almost impossible to consider an MMORPG in light of the entirety of the game because MMORPGS are games which are designed as much as is possible to never end. The PR materials for Final Fantasy XIV encouraged reviewers to put in 40-50 hours of play “to be able to give a reasoned, credible depiction of the Final Fantasy XIV: A Realm Reborn Experience.”

I initially estimated that I could put in 40 hours in the course of a week. The game doesn’t have a time counter, so I can’t tell you exactly how many hours I’ve put in, but I’ve been playing the game for more than a month and I still haven’t completed the single-player storyline.

And, representative or not, I can say that I haven’t enjoyed simply moving around in the world this much since Red Dead Redemption. When I finally got a Chocobo of my own, I spent some time simply running around in the high-level areas I hadn’t seen yet. It is an experience I would recommend to anyone, as much for the thrill as for the beauty and variety of the landscape.

Given the variety of levels of player experience, the game does a great job of using scaling systems in order to maintain its level of difficulty. In traditional RPGs, I’m the sort of player who does a lot of grinding so that when I reach boss fights, I’m as overprepared as possible. In A Realm Reborn, boss fights, dungeons, and live-time multiplayer FATE events are designed for certain levels, and players above that level will actually be reduced to a lower level in order to participate. High-level players do maintain some advantages, particularly in weapon and armor bonuses, but no matter how strong your character is, Ifrit will always be stronger. The fight will never be easy.

Failure is part of difficulty. Difficulty is part of the design. You are fighting gods. Sometimes, you will lose.

Every boss, every dungeon is intricately designed, and part of that design, logically, involves repeatable patterns and distinct roles players have to learn in order to succeed. It’s impossible to succeed without knowing the correct strategy, but knowing and executing the strategy isn’t always enough. This makes for genuine challenge, but it also generates an impulse to place fault. Not every class is an equally effective healer. A high-level DPS can make it hard for a lower level tank to perform effectively.

Final Fantasy XIV’s level scaling is not just a way to maintain difficulty. It’s a shift in the way that the game manages the time players invest in it. In a classic RPG, level grinding is largely a matter of seeking out random enemy encounters in order to gain experience. Final Fantasy XIV, however, has reduced the amount of experience available from individual creature battles to the point where it’s really not an effective means of leveling. Instead, grinding is a matter of completing hunting lists; killing, say, three of a specific creature will provide an experience bonus, but it’s back to almost nothing for the fourth.

In RPGs where major enemies are designed to reward tactical strategy, grinding is a way for the player to use time invested in gameplay as a way to balance strategic demands. Level grinding is, in effect, a way to purchase the luxury of not thinking. A battle, for example, that may be an intricate but winnable challenge for a level 35 player might be a simple matter of attack spamming for a level 40 character. Final Fantasy XIV’s level scaling does away with that. Players who don’t become proficient in the more advanced combat systems simply won’t progress beyond a certain point. There’s no way around the demand to develop technical proficiency in the game’s systems.

Although, of course, the development of technical skill is also a time-related task, and for some players, it will take a lot longer than grinding would have in a non-scaled system.

For a game whose world is built on international political intrigue, the racial politics of Final Fantasy XIV as built into gameplay are still a bit troubling. While the three major city-state of the early game are each built on coalitions of the five available player character races, each city state exists in proximity to at least two “beastman” races, which worship “primals” (rather than “elementals”) and compete with the city-states for resources.

At regular intervals, the single-player story gives indications that conflicts between beastmen and the “enlightened races” are a result of hostilities on the part of the city-states. In cutscenes, beastman characters talk, and even help the player.

For better or worse, Final Fantasy XIV is not really a game that’s trying to be terribly thoughtful about violence

When running around in the game world, however, beastmen are simply fiends who can be killed at will. Certain advancement metrics require that a certain number of a particular class of beastman be killed. (There are, for example, beastman entries in each of the hunting logs of the various classes and the Grand Companies, which provide experience bonuses for certain enemies.)

For better or worse, Final Fantasy XIV is not really a game that’s trying to be terribly thoughtful about violence, or building a consistent, coherent political allegory. Fantasy is a genre whose troubling racial and xenophobic tropes go back a long, long way, and Final Fantasy XIV is clearly trying to move beyond the one-dimensional model of absolute evil and all-out war that drives ur-texts like The Lord of the Rings. The Final Fantasy series has a tradition of major characters with complex motivations, both good and evil, and the narrative world of Final Fantasy XIV benefits from the way the story builds some of that complexity into the races which are in conflict with the city-states.

But if you want credit for trying to build respect for “beast” races into the story of your game, then it would behoove you to build it into your gameplay mechanics as well. Building systemic rewards around the indiscriminate slaughter of members of other races makes a lie of any effort to treat them as moral agents in the narrative.

There is, of course, room for all of this to change. Future patches and updates will likely expand the world and raise level caps. Basic mechanics may be tweaked. There will be new bosses, new dungeons, and new real-time “FATE” events. Maybe we’ll get a new ending. Who knows? It’s happened before.

Like many, MMOs, Final Fantasy XIV includes certain gear that function as visible status markers for players. A paid subscription of 90 days or more earns the player a flying demonic mount to travel around on in place of the standard chocobo. Reaching the level 50 cap opens up the opportunity to earn ultimate gear for that job class. Completing the main storyline earns the player a Magitek Armour mount (recognizable from Final Fantasy VI).

When you start, all of these items can act as a reminder of exactly how far you still have to go, but every once in a while, they can also show that there’s more than one way to make your way through the game.

Recently, I found myself completing main scenario quests next to a player in full ultimate Black Mage regalia. My twinge of envy was balanced by the recognition that this player had taken a path to progress to level 50 other than the primary storyline. I’m sure that there are players who will interact with the single-player narrative as little as possible–after all, not everyone needs the full tutorial, especially if you’re coming in as part of an active group of players. Some of us spend our free time reading, and some hanging out with friends. MMOs allow players to do both, but how you interact with the game may have as much with the particular leisure activity that you’re replacing as the structure of the game itself.

All I might be able to say for certain is that in one way or another, to one extent or another, your experience with Final Fantasy XIV will be different than mine. This is as it should be. With any luck, we’ll meet up in Eorzea and compare notes.