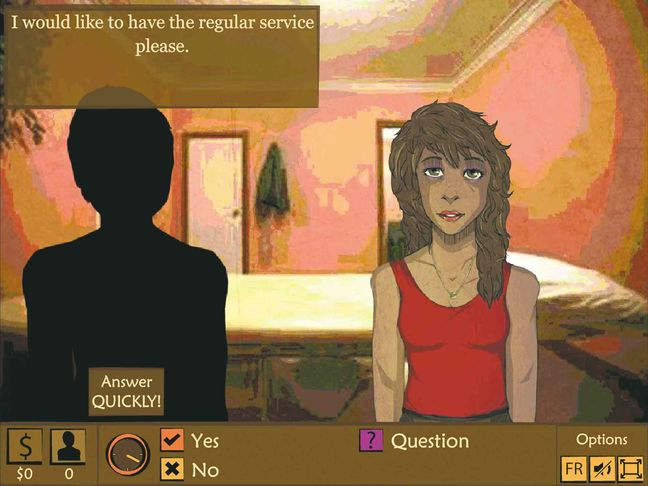 Over this past summer, Anita Sarkeesian exploded the discussion on the representation of sex workers in videogames after publishing an episode of her Tropes Vs. Women in Video Games Youtube series. Of course, while the topic of sexualized women in videogames has always been hotly debated, Sarkeesian’s analysis seemed the first to focus specifically on the medium’s exploitation of sex workers. “Developers regularly utilize the brutalization of women’s bodies, and especially the bodies of female prostitutes, as an indicator of just how harsh, cruel and unforgiving their game worlds are,” she explains, later highlighting how “[this] pattern of utilizing women as background decoration works to reinforce the myth that women are naturally fated to be objectified, vulnerable, and perpetually victimized by male violence.”

Last month, a group of sex workers successfully petitioned to get GTA V removed from Targets in Australia with over 40,000 signatures. In an article for Daily Life, one of the women spearheading the campaign wrote about the abuse she herself faced in the sex industry. According to her, the normalization of violence against sex workers in games like GTA V “spreads the idea that certain women exist as scapegoats for male violence.” Citing the statistic that women in the sex industry are forty times more likely to be murdered by a man than women not in the industry, Nicole asserted that—in a very real way—virtual entertainment like GTA V breeds a culture that makes the world less safe for women like her.

In the minds of the uninitiated, the word “videogames” may appear synonymous with the act of beating up virtual hookers. Yet while the mistreatment of sex workers persists as one of gaming’s most infamous facets, little discussion is ever had over how the medium could actually contribute to the dialogue, or even to a solution.

But in Canada, when impending new prostitution laws intensified the national debate over the policing of sex workers, a group of academics sought out the videogame format for exactly that.

“After conducting a survey on what was being written on the subject, we all found the coverage to be incredibly piecemeal,” says Lisa Lynch, an Associate Professor in the Department of Journalism at Concordia University. “The issues always got buried under the same news cycle, each outlet focusing on their own lead or angle in lieu of integral background information.”

According to Lynch, because the circumstances for sex work differ in each different part of Canada, getting people to understand the actual effects of the bill requires a kind of mediun that allows people to see how the many individual moving parts of the issue interact with one another. “This nationalist bill impacts all of these local systems in very locally-specific ways. Sure, a change in the law might grab the media’s attention, for a little while. But conventional media can’t cover this issue well, in terms of the persistence and attention to complexity needed.”

Essentially, they needed a format that could demonstrate how systems of law, poverty, and the policing of communities created unavoidable challenges for workers in the industry. So when Associate Professor Sandra Gabriele from the Department of Communications approached Lynch about making a videogame that tackled prositition laws, the idea seemed less crazy than it sounded. Pulling inspiration from the book Newsgames: Journalism at Play, the two assembled a team of grads and undergrads who could help put some of its ideas to the test.

In The Oldest Game, players inhabit the role of a sex worker named Andrea, who travels through three major Canadian cities (Toronto, Vancouver, and Montreal) in search of safe working conditions. True to her initial criticism, Lynch emphasizes that “what we really try to address is how the different systems fueling this issue interrelate and diverge throughout different locations.”

Emulating the real life challenges that many sex workers face on a daily basis, the player must balance two major objectives: making money and staying safe. In her line of work as a street worker, a masseuse, or an escort, Andrea encounters a variety of difficult decisions that stem from navigating new restrictions brought on by policing legislation.

As a newsgame, The Oldest Game is not impervious to needing an “angle.” Lynch admits that, “There’s still an active debate over whether sex work is a form of work that should be protected. But from our perspective, we need to prioritize pragmatic solutions that keep the most amount of people safe.” While the new legislation in Bill C-36 claims to “protect” sex workers, Lynch explains that in actuality a lot of the restrictions only corner women into more dangerous situations.

In a blog written by the team’s research assistant, Amanda Feder explains how they’re translating one specific impact policing has in real life massage parlors in Montreal. Since many of these parlors obtain licenses that label them as a salon, police can execute random searches if they suspect any sexual activity. “They go in and search for evidence, in particular condoms, and use this to incriminate sex workers.  This consequently puts pressure on sex workers to forgo protection in fear that it will get them arrested.”

Lynch explains that the main problem with the Protection of Communities and Exploited Persons Act (which went into effect last month) is how it “assumes sex work is inherently victimizing and sex workers need to be protected through some sort of legislation. In the end, it only manages to further victimize an already marginalized group of people.”

What are the ethical limits to constructing a “fun” experience of sex work?

As the game enters into the focus-testing phase of development, Lynch says the team is particularly interested in seeing how people who believe sex work should be eliminated will react to the experience. Though their design prioritized accessibility to a wide audience by avoiding anything visually explicit, Lynch worries that even their pragmatic approach to sex work and content may still be too off-putting for those on the other side of the debate.

One of the biggest difficulties in creating The Oldest Game, another blog post states, lies in negotiating “the tension between creating a fun and engaging game and depicting a lived experience.” Enjoyable, smooth mechanics and accessible gameplay ensure that more people will play the game. But what are the ethical limits to constructing a “fun” experience of sex work? While the team has been working closely with sex worker Marilyne Hudon in order to get feedback on fair and realistic representation, “from the very beginning we’ve struggled with the concept of how you resolve a game like this. Will there essentially have to be a no win-state? There’s a real dilemma in concluding a game like this with a satisfying ending,” Lisa explains.

Throughout the process, Lynch has also wondered about the exact place newsgames can have in the current state of media coverage. “I remember talking to [Ian Bogost, an author of Newsgames: Journalism at Play,] when he was writing the book and going around to different newsrooms in order to talk to them about the format,” she says. “The frustration for him—which I think still rings true—is this aversion journalists have toward… well, I guess you’d call it the ludic in general.”

“The frustration is this aversion journalists have toward… well, I guess you’d call it the ludic in general.”

While newsrooms remain unreceptive to the idea of actually creating newsgames themselves as a type of coverage, Lynch is happy to see they’re still willing to cover the work others are doing with the format. And while momentum for the medium may not be found in news outlets, “I think we can harness the enormous amount of energy that’s coming out of universities for newsgames, especially the tremendous amounts of interest students have in coordinating between gaming and the newsroom.”

Though the effectiveness of Lynch and Gabriele’s experiment as a form of news coverage remains to be seen, their contribution to the medium seems already proven to some degree. As Sarkeesian might say, sex workers are finally being taken out of the background and into the forefront of a game narrative. In fact, Lynch says that “in many ways, we’re trying to reverse the way sex workers have been represented in games. Rather than representing them as disposable decorations, our game follows the same sex worker’s story throughout her travels across the game world. In the process, it’s actually the Johns who get anonymized and get visually represented as crude, shadowy outlines.”

But aside from finally demonstrating an alternative to the brutal representation and utilization of sex workers in games, The Oldest Game shows exactly how the medium can excel as a vehicle for understanding. If, as Lynch hypothesizes, conventional news media remains ill-equipped to tackle the systemic aspects of an issue, then legitimizing the newsgame format becomes integral to the information dissemination process.