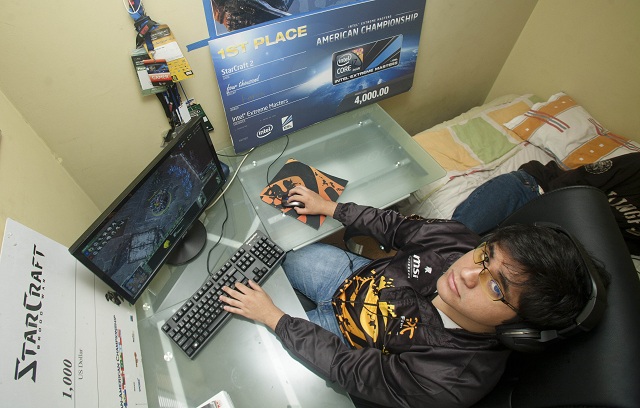 Jian Carlo Morayra won the Panamerican World Cyber Games last year in Sao Paulo, Brazil. It was the third time that he had won that title and he’s known as the best South American Starcraft 2 player. The first time that I met him was in 2008, at a local Starcraft Championship in Lima, Peru. That day, Jian Carlo—or Fenix, as he’s known on the Battle.net servers—lost to an unknown player in the finals. He was just 16 years old.

Some years later, I come to his room to talk with him and get some free Starcraft 2 classes. The first thing that I notice as I walk in, apart from his checks and trophies from past tournaments, is a biography of Carlos Slim, on top of a corporative finance handbook. The Mexican billionaire is the world’s richest man according to Forbes’ list, with almost 75 billion dollars. Fenix tells me that he’s his idol, and that he admires him for his acute mind for investing. Slim began his career at an investment fund, although he studied civil engineering and got his degree the same year that the Beatles got their first single out. Rapidly, he started buying companies that were in financial problems and made them profitable. His best acquisition was the Mexican telephone company Telmex, in 1990.

Once he had an ear infection and the doctor had to diagnose him through Google Translate.

Fenix is a quiet guy. He lives with his parents and siblings at a building near the sea at Lima, a city where Starcraft is observed as a vice. For that reason, his parents didn’t like that he spent so much time playing the game. That was, until he started winning money in local tournaments and travelling abroad. His first flights were to Mexico and Brazil, but later he also visited China and Europe. In less than two years he got a contract with the Europoean e-sports team Fnatic and was getting payed $4000 monthly, almost the same amount of money that a member of the Peruvian Ministry earns. In 2011, Fenix lived in South Korea, where he got a new team and practiced for some months with the best players of the country. But he didn’t get used to the long training sessions and the language. He tells me that once he had an ear infection and the doctor had to diagnose him through Google Translate.

His interest in finance began after finishing school. He excelled at math and he loved the risks involved around a hedge fund. However, he decided to take a sabbatical year to play Starcraft 2. His parents supported his decision and he had the opportunity to compete in tournaments in Europe and Asia. Fenix thinks that there is a great relationship between Starcraft and finance. On a match, you have to take risks when deciding to expand your colony and change your strategy according to your opponent’s decisions. Like in market stocks, you must not put all your money on one strategy, and you have to know what’s happening in the field at every moment. You need cold blood and try to deceive your rival, while being aggressive at harassing him. It’s also the same in poker, Fenix’s new interest.

Like in market stocks, you must not put all your money on one strategy.

Many pro Starcraft players decide to go into poker, which has a similar adrenaline rush. Progammers are known to be highly competitive and RTS gamers are usually excellent at getting probabilities, the cornerstone of poker. They are quick thinkers and have a strong mentality. One of the best German Starcraft players, Dominik Kofert funded PokerStrategy.com, a place to learn all the tricks at poker and also one of the sponsors of TSL, one of the biggest Starcraft tournaments in the world. The Starcraft: Broodwar player Hevad Khan got into the World Series of Poker Finals in 2007, earning almost $1 million after stepping down from e-sports. Bertrand Grospellier was one of the best Starcraft players in the World, after finishing second on the World Cyber Games in 2001 and winning the Euro Cyber Games in 2003, among other achievements. He then went to play online poker at a competitive level and have earned more than $8 million.

Fenix tells me that he just qualified for a local poker tournament, but he has to travel to Korea again to participate in the World Cyber Games. He thinks that his career as a professional gamer is arriving at its end, and he’s looking to return to his finance studies and participate in more poker tournaments.

Some months later, Fenix would be beaten in the first round of the World Cyber Games Finals by SuperNoVa, a Korean pro player. Still, he would be the best Peruvian and South American Starcraft 2 player and would be preparing himself to the next big tournament: the Starcraft 2 World Championship Series, after winning the local qualifiers without any hassle. He’s still looking for getting into college.