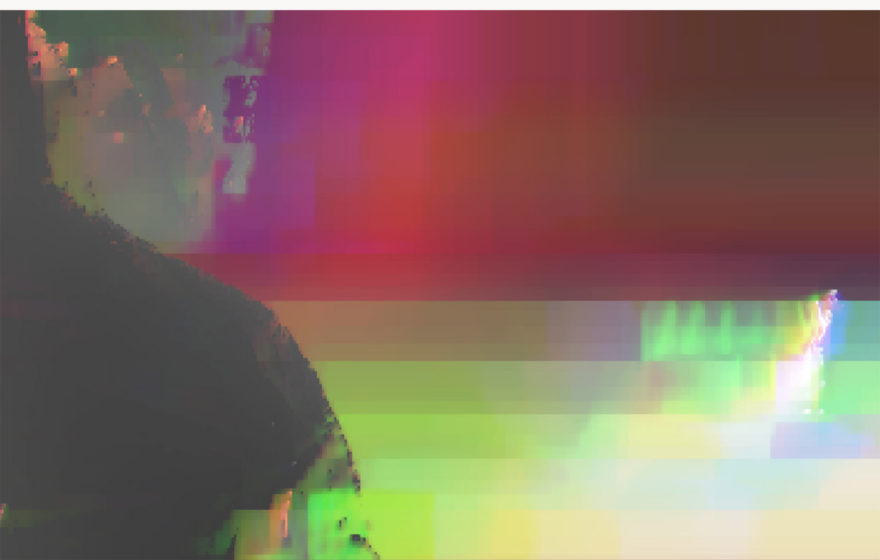 RŌA is best seen rather than described. But, as I have to use words, I’ll say that my first impressions of it were that it looks like someone turned datamoshing into a videogame (if you don’t know what datamoshing is, there’s a whole site dedicated to it).

Colors belch into each other across the screen, glitching, frazzled, swirling like electronic liquid. Among these colors you can sometimes make out figures, stood in a group, all of them frozen in their animation. These figures seem to affect the shades and tones of the pixels of color around them, while they themselves are corrupted by the psychedelic hues lapping at their outlines like a corrosive ocean.

“The player has to move playfully”

The creators of RŌA, collectively known as Arquoia, don’t talk much about how it looks, but rather what they want the game to achieve. In the description, it’s explained that the game is about creating a still life. You move around in 3D space, changing your angle and position around the figures, letting the colors wash around them until you find a satisfying composition. “Whilst in many games the beings are eliminated by clicks, in RŌA you put them at rest or awake them again,” says Arquoia.


There are no time limits or any other restrictions placed on you in RŌA, which may make it more of an art tool than a game. However, there are apparently two endings to reach, despite Arquoia stating that “the journey is the destination here.” How you might reach those endings seems to be hinted at in these lines: “The player has to move playfully to create appealing and mesmerizing pictures and moods. One has to attentively hunt or catch the moment to see something splendid appear.”

RŌA asks something unusual of players, then; to experiment like an artist with angle and color. It’s a game that is beholden to your capacity to let your imagination unfold on a canvas. It’s a game that, as Arquoia states, for people who are “open to the uncommon, in wonder watching the stars and chaos,” and who “maybe [go] to museums sometimes.” If you’re open to interactive experiences that encourage you to enter a dreamlike state and to play with visuals then it’s worth checking out. It’s a game about finding the bliss in noise.

You can purchase RŌA on itch.io and Game Jolt. It has been Greenlit and will be coming to Steam.