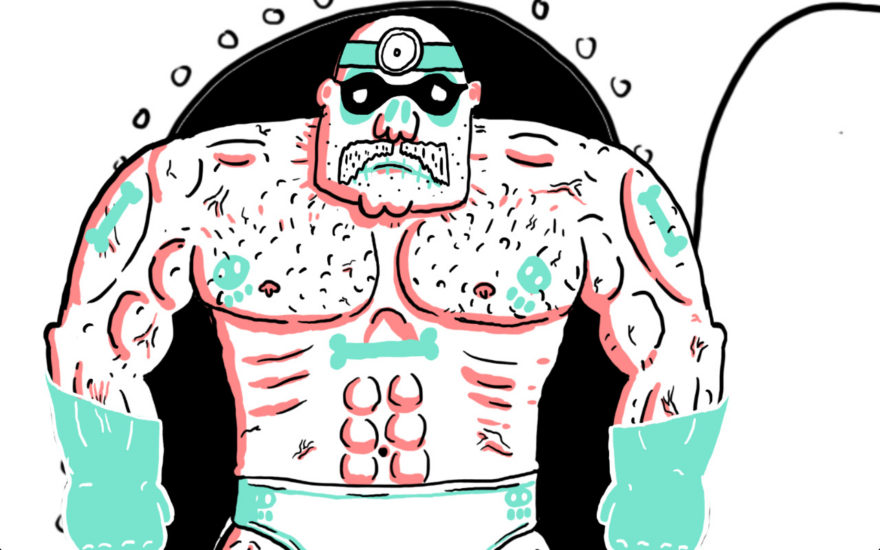 Before the dating app Tinder swept the modern dating scene, one of the only examples of gamified wooing was the absurd activity of speed dating. In speed dating, you’re given a limited amount of time to get to know another person, before a klaxon sounds and the next desperate individual shuffles in for your judgement. Instead of genuinely getting to know someone you’re left with asking the same cookie cutter questions, over and over, until one person kind of clicks. The South African Team Lazerbeam poke fun at this old past time in their latest charming dating sim, Wrestling With Emotions.

Big beefy wrestlers, looking for love (in the ring)

Wrestling With Emotions sounds just like what its name implies. Big beefy wrestlers, looking for love (in the ring, of course). In the 400 unique outcomes, you generate your own wrestling persona using the game’s “LOL” (also known as, Look Out Lovers) character creator. After that, it’s off to the races (or the speed dating races that is) to match with one of eight hunky wrestlers. “Whether you like them big and hairy,” writes Team Lazerbeam in the game’s description. “[Or] mysterious and deadly, oiled-up and angry or friendly and hideously-mutated, we’ve got the man for you!”

Team Lazerbeam’s no stranger to dating sims. In the game Snow Cones (2015), the adorable perils of a poor snow cone’s first date are explored. In the recent Bionic Bliss, while not quite a dating sim, operates similar to one. As a nameless employee, you communicate with cybernetic-limb-recipients, choosing either to help them with their problems, or make their lives difficult.

Team Lazerbeam consists of the coding and “feel” prowess of Richard Pieterse, the chipper music and sound effects orchestrated by Jason Sutherland, and the eccentric art and writing of Ben Rausch. With Wrestling With Emotions, Team Lazerbeam triangulates their trifecta of gaming expertise into one, singular bizarre experience. After all, it’s not everyday that my wrestling alter ego “Captain Unstoppable Mewing Master” finds true love.

You can romance bicep-y wrestlers to your heart’s extent by downloading Wrestling With Emotions for PC or Mac here.