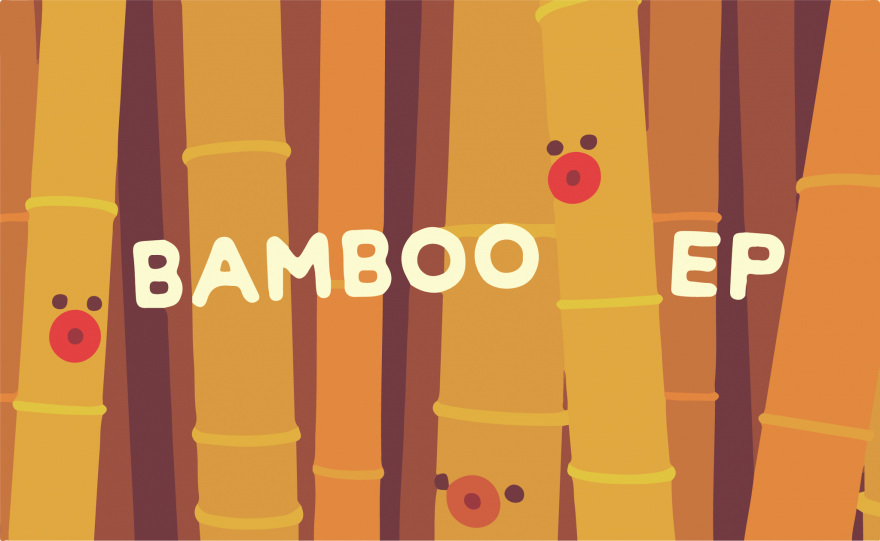 The Sokpop Collective, a group of four like-minded Dutch game makers, is releasing the Bamboo EP today. The obvious question for me to ask was: why bamboo? “Bamboo is strong, yet flexible and makes an amazing sound,” I’m told. “On top of that, bamboo makes for a good aesthetic. It’s such a unique plant with such distinctive properties.” A great thing to base a videogame album on then, I suppose.

I’m not sure whether it’s Rubna, Aran Koning, Tijmen Tio, or Tom van den Boogaart—the four members of Sokpop—who is answering my questions via email. And so I submit to the idea that it’s the scraggly sock puppet that the Collective uses as its mascot that is talking to me. As you’d expect from a mascot, it represents the group pretty well, it being a bit of a scribble with an endearing, childlike personality to it. The games made by this group of four have similar traits.

“None of us can really draw so most of our games just consist of straight lines and circles,” Sokpop said. “We animate almost everything from code, so all you see in our games are lines and circles that wiggle, wobble and move about. That contributes a lot to the organic gameplay we make.”

The word organic comes up time and again during our conversation. It permeates the Collective; not just their notion of play, and their game-making processes, but also how they formed in the first place. They met in 2014 after working on games by themselves, and found that they shared similar styles and valued each other’s opinions on their projects, so they continued talking and participated in game jams together. The name Sokpop came as a result of this collaboration, and soon after they learned the benefits of being a collective: increased visibility, financial safety net, and being able to share administration responsibilities.

“We make games that are playful, and explore intrinsic fun”

“Someone once said to us that there are a lot of people with both talent and ambition and that doesn’t make you special,” Sokpop told me. “The hard part of making games is creating a healthy environment in which you have the time and space to do what you love to do. So ever since we’ve been trying to create that for ourselves through Sokpop.”

Bamboo EP is Sokpop’s first commercial release and so it should set the standard for what they’re all about: “We make games that are playful, and explore intrinsic fun rather than pursuing goals,” in Sokpop’s words. The EP contains two games and an interactive menu—you swim around a spherical pond, nudging frogs off lily pads and bumping into goldfish. The first game is “Bamboo Heart,” a frantic side-scroller that has you swordfighting various anthropomorphic characters in a bamboo environment. But what about it makes it distinctively a product of Sokpop?

“In Bamboo Heart (the swordfighting game) for example, it’s not about ‘oh in this situation i have to press these buttons to solve it’, but rather a stressful moment in which you forget you’re using a controller and just try to survive without really knowing how to achieve that, but that’s what swordfighting must really be like, right?” Sokpop said. “Our games mostly are somewhat of an emotional experience like that and have a certain emotion or feeling as a main theme. A game of ours typically tries to make you happy and laugh, wander in curiosity or just relax for a bit.”

The second game, “Bamboo Ball,” is certainly of the same mindset, though is a little more chill than the first game. In it, you and an opponent are placed on opposite sides of the screen with a number of bamboo plants with you. The idea is to pick up balls to throw at your opponent’s bamboo to smash them. Whoever smashes up the other person’s bamboo first wins. It comes with a choice of the four seasons that acts as four different pitches to play on: spring is the standard, summer has beach balls, fall has a gust of wind that you need to adjust your throws for, while winter lets you roll up snowballs to make them bigger.

Sokpop wanted Bamboo EP to be a little more than just a collection of games. To achieve that, they added a secret that you can unlock in one game for the other. “We intend to explore those cross-over mechanics more in possible future albums,” Sokpop said. “I think that only because our styles overlap as much as they do we are able to make a more coherent collection. It’s a privilege of being in a collective. We should make use of that!”

Bamboo EP serves as a great introduction to what the Sokpop Collective is all about. It’s playful, scrappy, and cheerful, even when you’re slicing up animals that stole your heart and replaced it with a bamboo one. There should be plenty more of that coming from this little videogame group in the future.

You can purchase the Bamboo EP on Steam. Find out more about Sokpop Collective on its website.