“The purpose of art is washing the dust of daily life off our souls.” – Pablo Picasso

This morning, it rained. I watched from inside, warm and happy to be there instead of underneath a punctured sky. Each droplet bolted to the ground like a bullet, heavy, fast, exact. The sound of rain, calming but always carrying a slight tinge of destruction, reminded me of the metaphorical clock ticking—all the work I hadn’t started yet. I left the window, the rain with it, and didn’t give them either much more thought.

Until hours later, when I played Petrichor.

Petrichor, released this week for free, begins much the same way I began my day. Underneath shelter, rain drizzling down outside my enclosure. A fire crackles in front of you, commingling with the delicate pitter patter of water meeting earth. When a prompt appears over the fire, telling me to take my first action, I pause. I don’t know why, but for a second I can’t bring myself to do it and interrupt this lovely introductory moment. Maybe because I don’t want to the feeling of anticipation before starting something new to end. Or because I sense anything entitled Petrichor, which is the name for the pleasant smell that follows a rain shower on a hot day, will be about enjoying the little things. Regardless, as a generally impatient person, I found the impulse curious. So, of course, I followed it.

“Remember The Sound Of Now” – Δ

I stay with that opening screen for at least a whole minute, unmoving. My eyes and mouse itch toward the red umbrella discarded a few feet away from my character. But I persist, trying instead to soak in (har har—inadvertent rain humor) as much of my surroundings as possible. The fire and the shadow it casts twitch together in a rhythmic dance, as a stream of water falling from the mouth of my cave seems in contrast almost made solid by its steadiness.

I remember the game’s description, urging me to “Remember The Sound Of Now – Δ.” I bring to mind my own experiences of petrichor, that humid and mildly earthy scent, before taking a deep breathe and finally standing up.

The short point and click adventure game that follows takes me back and forth across a small wooded area that provides simple environmental puzzles. My trusty red umbrella companion is my only vehicle for progressing through the subtly surreal adventure. As I quickly learn in the first area, passing through a solid stream of waterfall will burst my player character into a million tiny fibers that regroup in her previous position. Only a flourish of my trusty umbrella can allow me to pass through the stream unharmed. As designer and programmer Matt Rohr says on the game’s dev log, Petrichor is “fascinated by the idea that something as normal as walking or even using your umbrella as a hook could be qualified as a sort of ‘casual magic.'” 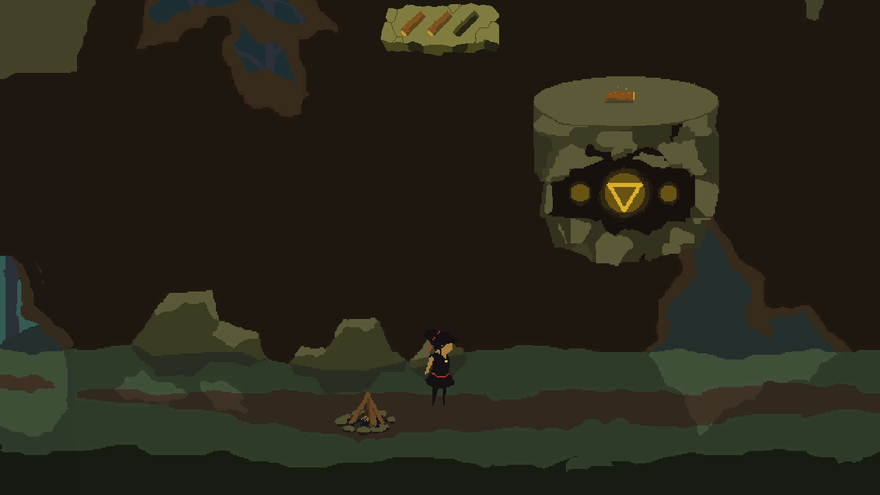 Each ability you need to progress is gained easily, by finding a nearby piece of parchment and drying it out by a fire. The game does not suffer whatsoever from the simplicity of its mechanics. If anything, I fault Petrichor with not being minimalist enough at times, and needlessly forcing me to backtrack on one too many occasions.

But perhaps even the monotony of the backtracking has a purpose. The copy for the game’s trailer, for example, reads: “we wandered the woods / and bathed in fractured walls / it was all so useless / and beautiful.” The two main developers of the Sundae Month team (which is Matt, and artist Eric Winebrenner) tend to provide only the most cryptic messages as explanation of Petrichor, hinting at the “eternal rain leaving puddles” and a “path [that] calls you back.”

Certainly by the end of the game, I am left with more questions than answers. But, surprisingly, this doesn’t leave me dissatisfied. Culminating into a heavy downpour, the climb that leads up to the final exchange in Petrichor reminds me of that slight danger I often sense in the sound of rain. My mind flashes to images of souls cleansed in baptismal waters. Or the earth flooded—destroyed by the very element that gives it life.

When the game finishes, I return to the beginning again, rain quieting back down to a gentle patter. I think back to my morning. Somehow, I feel guilty for having spent more time and attention on a game’s rain showers than real earth’s rain showers. But if I hadn’t played Petrichor—if I’d never observed how each droplet that hit the ground burst into a ripple, or never heard the gentle strings of its lovely soundtrack by Jack Yeates—I wouldn’t have thought twice about what I saw while glancing out my window.

You can play Petrichor for free here. Sundae Month, as a student game dev collective, has a few other worthwhile free games here, and are gearing to release another, more larger scale surrealist game called Levity.