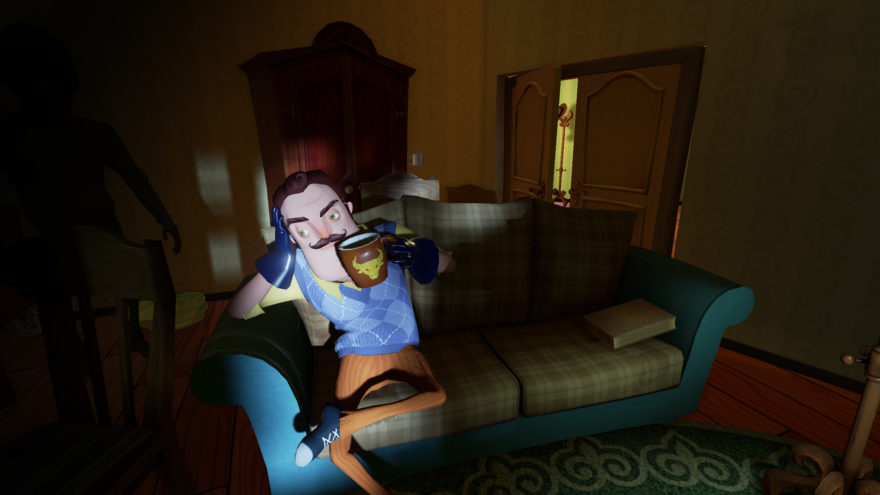 You might be lucky enough to live in a lovely neighborhood, surrounded by friendly people who help one and another and come together during times of grief. However, even among these quite communities (perhaps especially so) there is that one person that always seems to be hiding something from everyone … something out of the ordinary. You might be too shy or too scared to ask them directly, but you can break into their house and investigate for yourself in Dynamic Pixel’s upcoming stealth-horror game Hello Neighbor.

Hello Neighbor has been in the works for a little over a year but recently reached a good enough position that the studio decided to reveal it properly. Pre-alpha codes were sent out to a select few to test it out, alongside an announcement trailer and 10 minutes of unedited footage that will probably make you jump out of your seat multiple times. You can watch that below at your own peril. And, more recently, a “Basement Teaser” has been sneaked out too.

As you’ll see across all this footage, Hello Neighbor takes a sandbox format, meaning that it allows you to experiment with different ways to sneak into your neighbor’s house without them noticing—or, if they do catch you, ways to evade them and hide. Important to this is that the neighbor has been built with an AI that learns your behavior across your many attempts. So tricks that you used when you first started playing may not be viable after a while. If you set an alarm clock off and chucked it into the garden to distract the neighbor once, don’t expect it to always work again.


I got the chance to try out the game for myself, and what really stuck out was the tension that Dynamic Pixels manages to create with a mix of audio cues, shadow play, and totally unexpected moments of surrealism. Also worth noting is the game’s art style, which the team describes as “Pixar-style visuals.” It lends a friendly coating to a game that could so easily become way too creepy—it’s an art style that brings out the game’s playfulness.

I would never do anything like the break-in stunts of Hello Neighbor in real life, which probably explains why I can’t wait till the game fully releases next summer so I can finally find out what’s in that guy’s basement.

Hello Neighbor is expected to release during the summer of 2017 exclusively on PC. Find out more on its website.