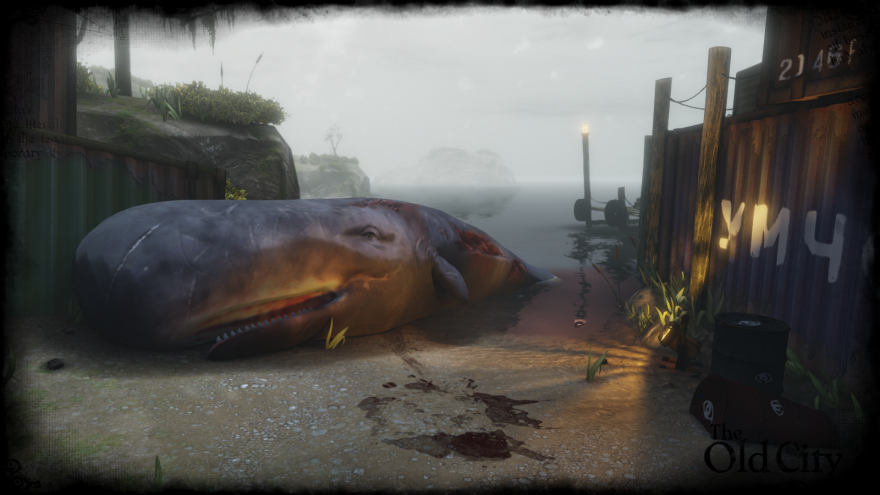 “Can you draw out Leviathan with a fishhook
or press down his tongue with a cord?
Can you put a rope in his nose
or pierce his jaw with a hook?
Will he make many pleas to you?
Will he speak to you soft words?
Will he make a covenant with you
to take him for your servant forever?
Will you play with him as with a bird,
or will you put him on a leash for your girls?
Will traders bargain over him?
Will they divide him up among the merchants?
Can you fill his skin with harpoons
or his head with fishing spears?
Lay your hands on him;
remember the battle—you will not do it again!
Behold, the hope of a man is false;
he is laid low even at the sight of him.
No one is so fierce that he dares to stir him up.
Who then is he who can stand before me?” -Job 41:1-10

The book of Job describes Leviathan as “a creature without fear,” one who is “king over all the sons of pride.” Leviathan is the sea monster above all other sea monsters. Everything from Loch Ness to Megaladon is child’s play in comparison. And while Leviathan is bigger, badder, and stronger than anything else out there, his most terrifying quality has nothing to do with his physical abilities. The true terror of the Leviathan lies in his coaxing—those softly spoken words, enchanting both sailors and philosophers alike, with promises of certainty—until it’s too late.

Legends describe fishermen lost at sea suddenly spotting an enormous mass across the way. They begin to celebrate, certain they have finally found land—salvation at last! Only the great big mass rises from the sea instead to gobble up each soul who was too lost to know the difference between false hope and true salvation. Whether planted through Satan’s malice or mankind’s own arrogance, the Leviathan is that all-consuming power of a false ideal. He promises sanctuary, but only brings destruction.

You might remember Old City: Leviathan as the intriguing but sadly unsuccessful Kickstarter it launched back in May. Or you might first and foremost remember it as the narrative-heavy game with that really sad looking beached whale. In the trailer released today for Old City: Leviathan we’re shown even more glimpses of the game’s fallen civilization, and the relics of their false ideals. Dead bodies litter the labyrinth of sewers; an intricate, ritualistic carving on the floor bleeds into shadow; and red words scrawled onto a wall mock humanity’s supposed achievements: “One small step for a man, another useless corpse for mankind.”

In the preview I played of the first few chapters, uselessness featured heavily as a reoccurring theme. The protagonist (referred to only as “Minotaur”) is a sewer-dwelling isolationist who’s insane ramblings guide you to a slow understanding of the world around you. But Minotaur is constantly calling everything he comes across useless: be it religion, other people, and even his own existence. Briefly, he considers a “utilitarian suicide,” not because surviving this post-apocalypse has become too hard, but because his low-impact life serves no practical purpose from his standpoint.

“One small step for a man, another useless corpse for mankind.”

But Old City‘s most effective use of uselessness is, oddly enough, the player’s own passivity. You have no ability to do anything in this exploratory game but open doors, listen to the narration, and walk through space. There is deliberate distance kept between you and the main character, whose high flown narration completely ignores the player as a presence. “You don’t even like the character really,” explains Blaine Bowen, the level designer and writer for Old City, “but you also empathize with the character… but you’re also not the character.”

From the beginning, the protagonist addresses an entity unknown to the player as though he is greeting an old friend, leading the player to feel even more alienated by the story. But as you explore more of the game world, triggering more of Minotaur’s narration, you come to realize that “he is actually addressing the environment itself—or what he calls Leviathan. So Leviathan, as the environment, variably responds, sometimes in more intense ways than others. But the more intense ways… you’ll only find those if you delve really deep into the environment.” Unlike the player, the environment is an active participant in the narrative, adapting to the player’s presence in a similar way to The Stanley Parables. Only rather than the player being at the center of that conversation with a responsive environment, the player in Old City is instead dropped into the middle of a conversation they’re in no way a part of.

Passivity isn’t often a commendable feature in a game, but in Old City, the player’s passive role results in a sensation of isolation that seems key to understanding the story’s overarching message. And even the more passive role of interpreter is engaging (and distressing) enough to keep the player occupied. The mysterious richness of the world justifies all that time you spend trying to piece the various facets of the narrative together. Old City rewards your curiosity, seeing as “the more you explore, the more you realize that the environment is really kind of alive. Or as alive as Minotaur’s mind portrays it,” Blaine explains. “Which is where the concept of the labyrinth comes in.”

Throughout the span of the first few chapters, the player returns to the same environments again and again, each revisit defamiliarizing the space in some tiny way that makes you doubt your own ability to perceive. “We want you to doubt everything,” says Blaine. “You have that adaptive environment where, depending on where you go, walls that weren’t there before appear—that kind of thing. And you’re left to question whether that part of the environment you’re in is real or not, just based on your character’s sanity.”

Combining the open level design of Gone Home with the linear narrative style of Dear Esther, Old City features eleven chapters, each with its own distinct environment for the player to either explore or ignore altogether. By making about 90% of the content in each of these levels optional, the game places the narrative responsibility on the player to discover all that there is to know about the story. It invites a kind of obsessive back-tracking in players who are dedicated to discovering its every secret (guilty as charged). It’s a pretty maddening experience, and mirrors the protagonist’s compulsive ramblings about epistemology. The pursuit of knowledge. The more you spin around a maze of increasingly impossible spaces, needing to know everything about it, the more relatable Minotaur’s descent into madness seems.

And the more I understood about the fallen society, the more glimpses I got of the Leviathan through the tableaus left behind in every environment. Each level contains remnants of a war between the three theological factions that used to dominate Old City. The markings of each faction litter these spaces, revealing bit by bit how the city fell. The Order, equatable to an atheist group, leaves behind their meticulously plotted equations on the walls. While the religious sect known as The Guild seems responsible for the dead corpses laid out sanctimoniously in front of an alter. Finally, The Unknowing. A pseudo-agnostic group who, from what I can gather, is mostly responsible for the nihilistic messages scattered around the world’s most impossible spaces.

“How do you know what you know, and how does that affect how we treat each other?”

Old City portrays these ideologies with a necessary kind of impartiality. None of them won the war, and all committed the atrocities against one another that lead to this now empty and quiet world. Each made the fatal mistake of believing their own false vision more superior than the other, and man fell from its collective arrogance as a civilization. “That’s really the whole point of the game,” Blaine explains. “That when epistemology is a communal activity, you end up with a sort of stagnation. So, what are the benefits of being completely isolated? Which is what the character you’re playing is; he’s totally misanthropic. We’re kind of fleshing out why that’s necessary, or why it might be necessary for some people to be that way.”

That belief in epistemology as a necessarily solitary journey is really the only thing that the PostMod team theologically has in common. “Everyone on the team has a different worldview. We have atheists, there’s a muslim, christians, agnostics. So before we even started the game, it was really important that we talked a lot about that beforehand. And despite having completely differing beliefs, we all came to this same agreement in terms of epistemology. It was something we all kept coming back to. This idea of how do you know what you know? So that’s what the game turned out to be. How do you know what you know, and how does that affect how we treat each other?”

Old City: Leviathan will be available on December 1st through Steam for PCs only, but its only the first part of a larger three-part narrative. The others will be released episodically throughout the following quarters.