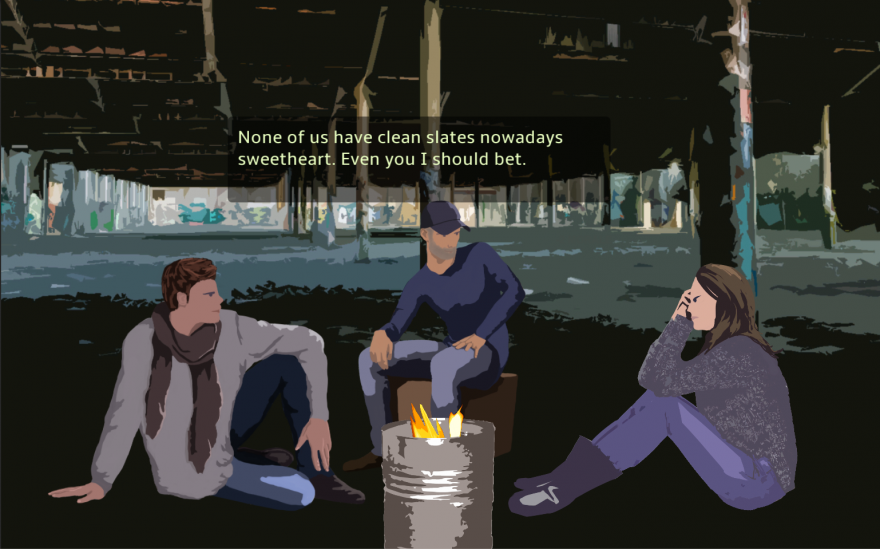 Ana and Jakob are hunched over and bickering by the fire, as usual. You try and ignore them and throw some crumpled up newspaper into the pit. The fire laps up the paper, hungry for more. As you stare into the flames, their arguing becomes harder to to tune out. Everyone is tired and hungry and stressed. It was a miracle you found this place untouched and managed to keep it fortified to ward off the curious.

Just as you were about to shout at your friends, a scream is heard from outside. The three of you freeze. “What was that?” Ana turns her head. “Ignore it.” Jakob mutters into his arm. The scream sounds again—Ana looks at you, her eyes wide. “They’re in trouble! We need to help.” You bite your lip and stare at the ground. Ana takes your silence as a “no” and curses. “You’re all fucking monsters.” You didn’t correct her. She was right.

The Monster Inside Me is a game written by Alice Rendell and programmed by Gauthier André. Inspired by a prototype created during Ludum Dare 33, this interactive fiction takes place in a post-apocalyptic world. The actions you take during the four weeks you’re holed up at your camp will have consequences, as “the game remembers each decision you make and has multiple endings based on them.” Some of these choices will change the course of the story, as expected, but will also have an effect on the “fragile relationships” of the people around you. This is reinforced through “morale,” which increases and decreases depending on how you choose to react to certain situations.

I was shocked by this outcome

As expected of a post-apocalyptic scenario, you don’t get to make easy decisions in the game. I used my first playthrough to test the waters of consequence, hoping not to drown in the weight of my decisions. I weighed each choice as if I were in the shoes of the character. The game asks, “Can you keep the fragile bonds of friendship in tact and hold on to those you need to survive?” Be it no surprise that I failed and had my friends accidentally murdered.

At first, I was shocked by this outcome. I did everything right. I told myself. I took the route of cold and calculating, not wanting to give strangers the benefit of the doubt—but ultimately caving when it came to letting people in who had food. That decision got Ana and Jakob killed, which, well … oops. Tensions also ran high between the two of them, which made it stressful when making one or two decisions. For the most part, I didn’t care about their feelings. I just wanted to make sure they stayed alive.

There’s an established relationship among the three of you, but the game is short, which makes it hard to form an attachment to either Ana or Jakob. That said, The Monster In Me is a great reminder that, when push comes to shove, survival of the fittest still reigns supreme, and that can bring out the worst in us. Playing through a few times to figure out how things could have been handled differently by making opposite decisions is highly recommended.

To play the game for yourself and learn more about it, click here.