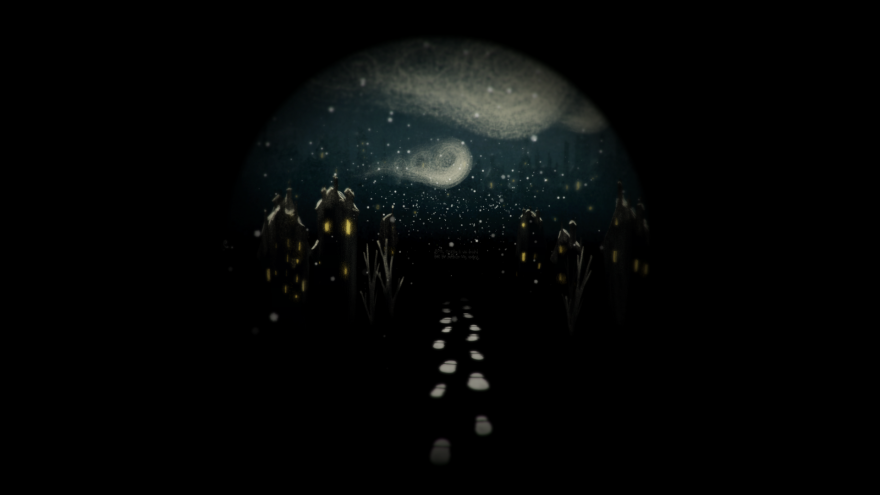 You lay sprawled on a cold, soft, pliable surface. Chest pumping, you try to catch your breath, snow falling on frozen cheeks and lashes, blurring your vision. But you don’t need to see. You know the sky above is just as blanketed as the earth below—the world inviting you to make a mark on the virgin blankness of its canvas.

Simogo’s latest entry to their already exceptional library of interactive stories (Device 6, Sailor’s Dream, Year Walk) comes in the form of a winter’s tale about an inventor and her misunderstood machine. As a gift to their fans, The Sensational December Machine offers a short journey into a 3D storybook space that leads you along a snowy path of winding words.

The Sensational December Machine brings you into its wintery folds with a tinkering soundscape just as sparse and enchanting as its story. By holding down on your mouse, the tile screen wooshes away and you settle on a place where falling snow and the twinkling lights of distant houses dance together. “There was once a town in a faraway land,” the archetypal tale begins, “in which people used all kinds of clever machines.”

The naturalistic soundscape transforms into an amalgamation of beeps and bloops.

As a story about inventiveness, the Simogo team worked hard during the game’s three week production to deliver a narrative experience that took full advantage of the player’s presence. The soundtrack, composed by Daniel Olsén, accompanies you dynamically, changing according to your pacing and some emotive cues from the story. When describing the kinds of useful machines that could help the townspeople with “practical things” like “scratching particularly annoying itches,” for example, the naturalistic soundscape of Sensational December Machine transforms into an amalgamation of beeps and bloops. The empty sounds of mechanical “practical-ness” commandeers the delicate emotions of before, and you yearn for something you once had, without really knowing what has been lost.

According to Simon Flesser, who makes up one half of Simogo (completed by Magnus Gordon), “We strive for very subtle shwoosh sounds so it feels like you are floating around, rather than walking. We always want to have subtle sounds like that for every interaction, to make them feel a lot more tangible.”

Since most of their previous games utilized only 2D space, a good portion of the time spent on their latest project was “talking bout how to make first person controls different in a 3D space, or how to simplify or make them more natural.” Simon believes that, in most other games, “it feels like developers have settled on one setup. A setup that seems both a little too complex and—to be honest—a little lazy.” It’s a design he says is still too marred by the aim-and-shoot functionality of its birth, rather than serving any sort of narrative purpose.

“We stood up a lot and studied what happens when you actually move and look around in real life,” he explains about Simogo’s investigative process. “So we play a lot with moving the camera sideways when you are looking around in the game, because in real life, when you look around you tend to move your shoulders and back, which creates a parallax effect you won’t get if you only rotate a camera like you normally do in first person games.” The result is a kind of discovery that mimics your peripheral experience: leading you along by catching your attention with something out of the corner of your eye. The intuitive and minimalist controls used to facilitate that discovery are mechanics Simogo hopes to use even more in the future.

The story that unravels in this digital storybook seems to coincide with Simogo’s plight as interactive storytellers. Or rather, with all inventors who harbor a bold vision of turning cold, hard machinery into something emotive. In Sensational December Machine, a young girl longs to give people a technological experience that’s about more than scratching an annoying itch. After toiling away, transforming a trigger-pleasing collection of bolts and screws into a beating heart of sorts, she brings her sensational machine to the townspeople—only to get shunned.

“Where is the button for scratching?”

“How will this machine help me pass time?” one asks. “Where is the button for scratching?” interrupts another. They’re the kind of questions you imagine would crush the passion right out of an inventor who wanted to provide an experience that met expectations an audience never even knew they were allowed to expect from a machine

“I find that using technologies to explore emotional experiences seems more scary to people who regularly play games than people who do not,” Simon says. While he preferred not to comment on any allegorical interpretations of The Sensational December Machine, he says that he is “not sure why people are so scared. Perhaps they just don’t want the things they love to change. Though I can’t see why there wouldn’t be room for a lot of different things in the digital space.”

When the woman’s fangled machine gets chucked to the curb only to rust in the snow, your instinct is—oddly—to protect it. Again, you’re not sure why, but you want to shelter this weird little box built not with logic, but with love. Its jutting shape, all stitched and glued together, reminds you of the ambition of an infantile drawing: inexact in its execution, but radiant in its sincerity.

In the last shot of The Sensational December Machine, the words fall away and you zoom out of a camera lens. It’s the lens from the woman’s disregarded contraption, inexplicable design and all. The music becomes distant and muffled, and your left to wonder where the machine begins or ends in this interactive experience. In the final shot, the contraption stands tall: resurfaced and impervious to the snow trying to bury it under an empty canvas.

You can play The Sensational December Machine for free on Mac and PC now. You can follow Simogo’s other projects through their devlog.