Open from November 24th to December 15th, the Museum of Feelings has been generating buzz recently as New York’s latest pop-up, announced with a mysterious website and slick series of subway ads that made me want to visit if only to find out what the hell it is. The resulting trip gave me feelings, sure, but not the kind I was hoping for, and probably not those the organizers were going for either.

When I first arrived outside the Museum of Feelings earlier this week, I was greeted with a line and display reminiscent of the Apple Store. Fitting, given that I had to walk through New York’s posh Brookfield Place mall to arrive at the site, but an odd feeling for something claiming to be a museum. The outside of the building looked like any of the other minimalistic white slabs dotting the New York skyline; however, it was accentuated by a purple LED strip as well as a trendy square logo which read “MUSE UMOF FEEL INGS.” The color of the LED’s display was supposed to change to reflect New York’s mood by “scrubbing social media data,” so I checked the color chart on the Museum’s website to find that purple meant the city was calm. Looking at the blank faces of those waiting in line, I had to wonder whether ‘bored’ would be more appropriate. 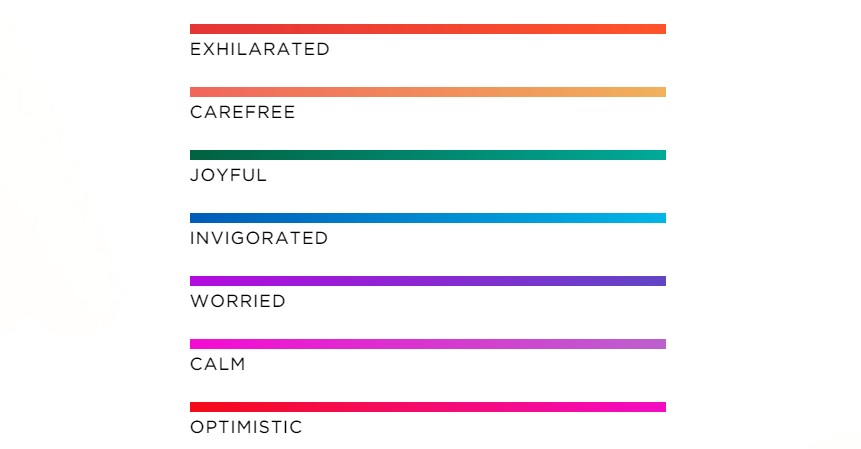 I joined my friends, who had already been in line for 45 minutes, and proceeded to wait another 30 or so minutes to get inside. Admission was free, but they were only letting us through in small groups. As I entered, I quickly understood why. The Museum was less of a collection of exhibits to explore at my own pace and more of a guided tour. I was handed a card with the Museum’s logo on the front and a reflective surface on the back and told to wait for the Optimism room. As I entered the Optimism chamber, I found a prism shooting out a rainbow of light at the wall and was invited to use my card to reflect the light however I wished. Yeah, it was fun, but something I had done many times before with my smartphone and a well-placed ray of sunlight.

we vegged out in a touchscreen-controlled kaleidoscope room

I was then lead through a collection of other, suspiciously marketable mood rooms—exhilaration, invigoration, joy, and calm. In the first, I got lost in a series of hanging green LED strips meant to resemble a forest. Next up was dancing in a disco lounge with circles that lit up around my feet and altered intensity based on my movement. Thirdly, we vegged out in a touchscreen-controlled kaleidoscope room punctuated by jaggy edges and lava lamp colors. Finally came relaxing in a fog-filled chamber that had me quoting lines from Luke Skywalker’s training on Dagobah to my friends. Throughout this whole experience, the air was thick with fragrance meant to embody each emotion, but I could barely tell them apart. They were noxiously overpowering at times, but more on my mind was the conspicuous lack of any negative emotions. If this place was meant to be a museum, you’d think they would want to capture a wide array of feelings. I asked an employee if we could expect anything like sadness or anger to show up during our trip, to which she responded “Oh, we don’t have any negative emotions here. We think it’s okat to sort of ignore those and focus on the positive.” I imagined how Lewis Black’s Anger from Pixar’s recent Inside Out would feel about that.

Finally, my group entered the tail end of the Museum in the gift shop. Resembling the Apple Store finish of the building’s facade, the sleek white room invited us to smell each of the fragrances used to embody each emotion along the tour, read the ingredients used for each, and make a “Moodlens.” At this point, my friends and I were too hungry to wait in line for the “Moodlens,” but we did look at the display of them on the wall. An evolution of the mood ring, the Moodlens purportedly uses “biometric input” to read one of your selfies and tell you how you feel. You can actually make one of your own over on the Museum website, which will then factor into an overall emotional map for your region. Check mine, apparently the picture of optimism, below.

The whole gift shop felt like some next generation storefront, with the Moodlens meant to lure you in, and the fragance display serving demo purposes. With names like “Exhilaration” and “Optimism,” the aromas felt like brands, and sure enough, you could buy them in scented candle form at a table to the left of the display. Thinking about the free admission, the omission of negative feelings, the pushing of the fragrances, and the trendy ethos of the whole thing, I started scanning the room for some kind of catch. It felt less like I was in an artistic statement and more like I was walking through an advertisement. And then right there on the wall, I saw my answer: “Presented by Glade.”

I wasn’t ready to bust out my tinfoil hat quite yet, but as soon as I saw the sponsorship, I pulled out my phone to double check the Museum’s website. At the bottom was a copyright logo attributed to S. C. Johnson and Son, Inc., the company that owns Glade. Turns out the whole experience was part of a marketing campaign for Glade brand products.

I left experiencing a bevy of emotions not explored in the Museum—disappointment, betrayal, and exasperation. I wouldn’t say I regretted going to the Museum of Feelings, since I did get to see some truly wicked architecture inside the kaleidoscope room, and dance in a lounge that reacted to my footsteps. I’m glad to have these memories, but the disingenuous marketing campaign behind them left me with more of a bittersweet taste than I assume was intended.

Check out the Museum of Feelings website for more information.