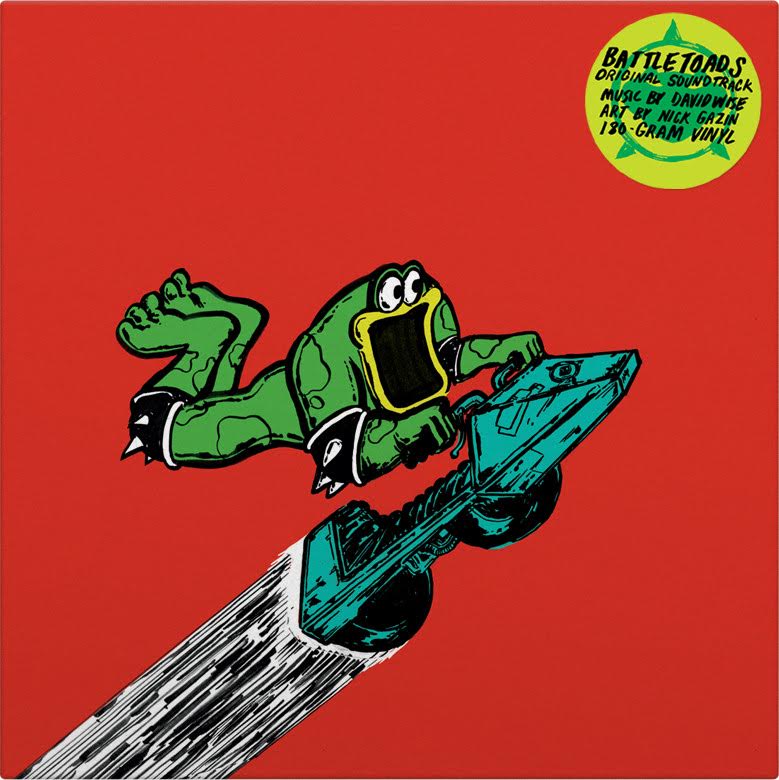 Battletoads was released in 1991 as an effort to rival the success of the Teenage Mutant Ninja Turtles. The game features three humanoid toads named Rash, Zitz, and Pimple and—while they do share some aesthetic similarities with their amphibian contemporaries—the series couldn’t be more different. Battletoads is an exceedingly punishing game and is often praised (and sometimes criticized) for its extreme difficulty. Where most beat ‘em ups throw wave after wave of low-powered adversaries at the player, Battletoads features obstacles and enemies that only increase in strength, frequency, and ruthlessness.

But, as a game remembered for its cruelty, Battletoads is often overlooked for having one of the most sophisticated soundtracks of its time. The compositions work so well, in fact, that the soundtrack was recently released as a full LP by the L.A.-based creative collective known as iam8bit.

As a physical object, iam8bit’s release is an absolute masterwork. The record is presented in a double gatefold sleeve with original artwork from Nick Gazin (best known for his recent work for Run the Jewels) and pressed on high-quality 180 gram vinyl. Vinyl nerds relish 180 gram prints: heavier than the standard 120 or 140 gram releases, it promises superior balancing, scratch resistance, and overall stability. In other words: it’s really thick.

Battletoads has one of the most sophisticated soundtracks of its time

Each record is custom-pressed with a special mix of green and yellow wax, a color that’s been artfully dubbed “toad skin.” It’s beautiful and messy and, when spun on a turntable, absolutely mesmerizing. It’s the perfect avatar for a game that features mutant toads dismembering robots and curb-stomping space rats.

The soundtrack—remastered specifically for this release—was composed by David Wise. His credits include Star Fox Adventures, Diddy Kong Racing, and the upcoming Yooka-Laylee, though he is best known for his work on Donkey Kong Country.

His compositions are notably atmospheric, a style derived from mixing sound effects from his games with melodic and heavily percussive accompaniment. A good example in the Battletoads soundtrack is the “thwomp thwomp thwomp” of “Pause,” a track cleverly placed at the end of side A. The beat that carries the song is made from the punching sound effect used in the game. It’s heavy and fierce and surprisingly thoughtful for something meant to play during bathroom breaks.

That’s part of what makes the Battletoads soundtrack so enjoyable to listen to. Every note is specific, every sound intentional; every track does as much to create a narrative landscape as the design of the levels they accompany. Consider “Ragnarok Canyon,” the second track on the record and the song for Battletoads‘ first level. It opens with a heavy beat and is soon overwhelmed by a speedy melody. There are several layers of deft percussion, each a sample of combat sound effects. There’s also this elongated synth that’s dragged over each chorus. It gives the level a pseudo-scientific, Mystery Science Theater vibe. It also mimics the noise made in game when long-legged robots manifest near the middle of the level.

Side B is filled with tracks that increase in complexity and pace, making it my favorite half of the album. The first track is the music that originally played during Battletoads’ cutscenes, rightly titled “Dark Calling.” The beat is a bit slower, a bit steadier, and it’s overlaid with a menacing synth that taps out in a high, confident pitch. It feels perfectly menacing, perfectly dark, with a richness built on layers of deep percussion. It’s short and sweet and a fantastic introduction to the last half of the recording, representative of the game’s final—and most excruciating—levels.

The last two tracks are the seven-second “Stage Clear” and 60-second “Game Over.” It’s a clever order and a testament to iam8bit’s dedication to impressive detail work. The record ends with a short reprieve, the rare sound of having actually beaten a level of Battletoads, only to be followed by the more obvious “Game Over.” When you play Battletoads you’re going to die over and over again, and the “Game Over” sequence is one you will hear multiple times.

Ending the soundtrack with “Game Over” is a purposeful nod to the punishing gameplay that made Battletoads a classic. It’s a tribute to the shadow of foreboding that is cast through every inch of the game. From the pressing, to the track listing, to the tender care given to Wise’s original recordings, this record demands respect.

And for me, that’s what makes this release so exciting. The Battletoads soundtrack is a legitimate artistic effort composed by a legitimate musician and it deserves to be taken seriously. This release does more than give listeners a nostalgic kick; it gives the Battletoads soundtrack the opportunity to exist on its own. It doesn’t matter if you’ve played the game, or that this pressing is a collector’s item, what’s important is that the music is presented as a complete and treasured work.

Special thanks to iam8bit, who provided the high resolution artwork that accompanies this article.