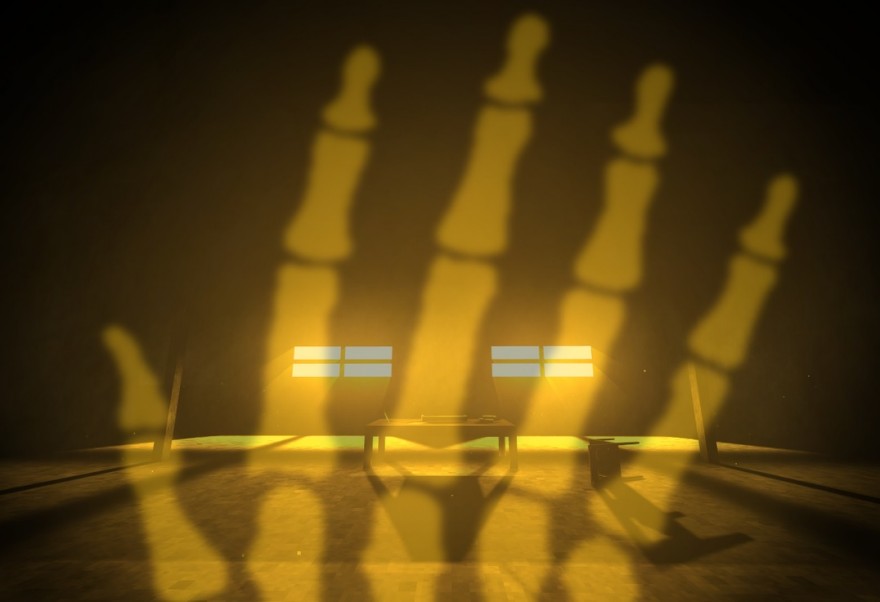 I always turn to Hitchcock, the “master of suspense,” when explaining the difference between terror and horror.

“There is no terror in the bang, only in the anticipation of it.”

What low-budget, experimental horror games often lack is terror, but not Fingerbones. It’s easy to pull off a jump scare—the horror—you just draw a gory monster set to spring from around a corner. Relying on this trick is why many horror games feel “cheap”; they lack terror.

Achieving terror in a videogame usually requires a more complicated set-up, typically a concoction of narrative context, subtle sound design, and threatening environments. Consider Thief‘s Shalebridge Cradle and Dead Space‘s  Ishimura, which are scary to simply walk around in. Ideally, the player should be allowed the space and time to absorb these cues in order to complete the effect. It’s a slow-cooking stew compared to horror’s frightful fry-up.

Fingerbones bears similarities to Gone Home in how it builds its terror.

One of the purest moments of terror I experienced recently in a videogame wasn’t even of the horror genre. If you’ve played Gone Home, you’ll probably remember your reluctance to enter a narrow space between the walls, decorated with old newspaper clippings and a limp lightbulb. That’s terror.

Fingerbones bears similarities to Gone Home in how it builds its terror. There’ll be spoilers below, so if you want to you should go play it now; it’s free.

Knowledge is terror in Fingerbones. As in Gone Home, your sole activity is scanning desktops and shelves for notes. Some are personal: You learn that you’re a man who lacks affection for his young daughter, the fruits of his failed marriage.

Others are ripped from manuscripts and books, revealing an interest in existentialism, science, and a growing misanthropy on the side. The irrational reasoning of the latter makes you question whether the supposed post-apocalyptic backdrop as “maybe the last man on Earth” is real, or conjured up in his mind. Either way, it won’t be long until you become disconnected from the man you embody.

This is why, when I stepped slowly toward the dark bowels of the building, I wasn’t nervous for the vulnerability of my virtual body. Instead, I found my heart breaking at the sounds of a young girl whimpering and sobbing in the basement. I drew a thousand terrible conclusions in my head.

The greatest trick that Fingerbones pulls is replacing metal keys with words. Opening doors requires entering passwords on a console. I knew they were leading me towards that dreaded basement; I knew that the more I found out the worse it would be. But once lost on that paper trail I couldn’t back down. The option to exit early is presented at all times by a door, but it didn’t even cross my mind.

The result of my half-unwilling but overwhelming curiosity? I was left groaning in revulsion and denial when the unwelcome reveal struck me. Fingerbones doesn’t need a jump scare to get you squirming.