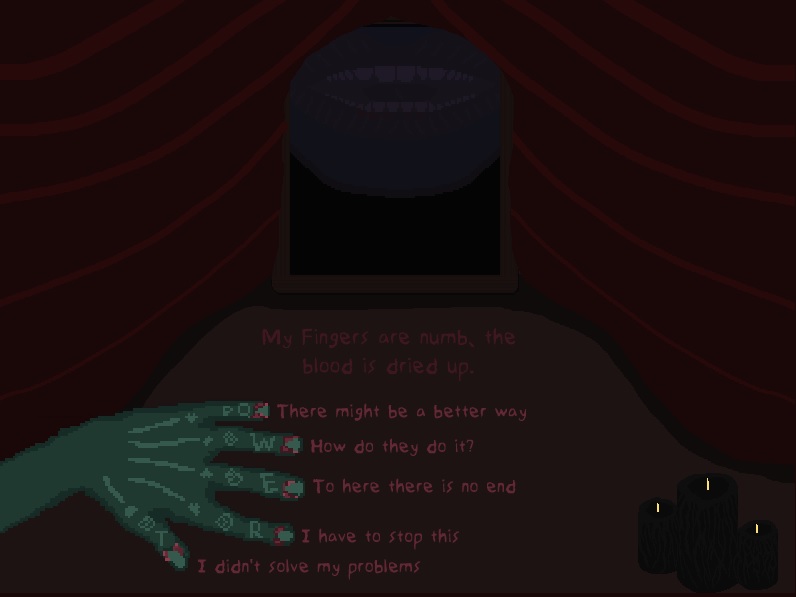 I’m a bit of a biter. I’m partial to chewing off a hangnail when one presents itself. Who isn’t? To me, hangnails are like ripe apples hanging from a tree, ready to be picked—a small nick with the teeth and your nails are trim again.

In younger days, my fingers would bleed due to peeling away too much skin, and exposing a pocket of pink flesh. That doesn’t happen anymore—the habit has lessened. But I do still bite the insides of my cheeks and lower lip, usually when angered, cutting them up into scars that the tip of my tongue enjoys tracing. No one else knows about that.

explores the thoughts that lead him to cannibalize his fingers.

While these impulses I’ve had over the years may sound gross and concerning, they’re not uncommon. In fact, this type of habit is so universally understood that we sometimes say that a horror movie is “nail-bitingly tense.” However, what I’ve recently learned is that there are people out there who take the same compulsion further. It’s called dermatophagia.

It typically emerges when anxious, leading to the biting of nails and the skin of the fingers to deal with stress. The three symptoms of dermatophagia are bleeding around the fingers, constant and compulsive biting, and skin discoloration or damage. If your fingers are raw, bloody, and blotchy from biting then you may have it. Sorry to break it to you.

But hey, maybe you can find solace in knowing that you’re far from alone. Take Sean Singh for example, the creator of semi-autobiographical videogame Fingercrafts, which explores the thoughts that lead him to cannibalize his fingers. Before you check the game out, I must warn you: the sound of the teeth sinking into the fingertips goes right through you, cutting you into a grimace, over and over.

Singh says he framed Fingercrafts as a one act play. “The premise of the game is to simulate dermaptophagia and the dependency and effects associated with it,” he writes on his blog. “Th[is] is based around making choices to find solutions to the characters problems, in order to do so you must bite the skin off near your fingernails, chew it, lick the blood clean and all the while your character will contemplate and evaluate your [decision].”

While it isn’t the smoothest-running game ever made (progress doesn’t always happen when it should), it does give insight into the personal psychology behind its subject, both Singh and others with dermatophagia. Most revealing is how one of the decisions you can make by chewing the fingers is, at first, contemplated with doubt, and then completely rejected with a “I have to stop this.” Within seconds the act of pleasure (the compulsion) is submitted to and then regretted; it goes from being the only way of coping to being absolutely useless, almost revolting.

And, in a way, that the game is a little broke, not always moving on to the next scene after chewing a finger, is an accidental but appropriate metaphor. The game is about trying to move on from a relationship that went bad, and how chewing the fingers feels like the only way to cope with this, but obviously it ends up getting you nowhere but at the doorstep of regret.

You can play Fingercrafts for free in your browser on itch.io.