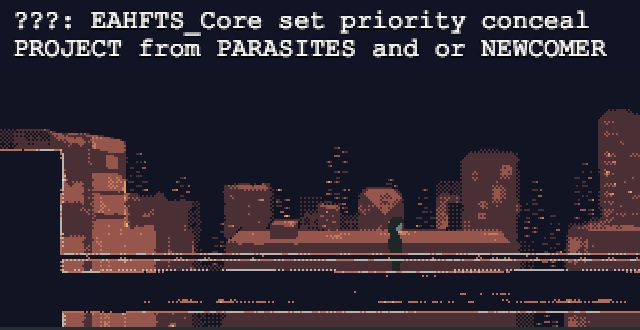 Fear of artificial intelligence seems to be on everyone’s lips lately, especially since Elon Musk, Stephen Hawking, and Bill Gates publicly stated that it will be humanity’s certain doom (I’m paraphrasing).

Yet, while technological singularity remains one of sci-fi’s favorite villains, movies like Her and Spielberg’s A.I. show a different side to humanity’s marriage to the super computer. Yes, artificial intelligence might surpass us. But who’s to say they’ll want to hang around a bunch of lowlife meat bags such as ourselves for very long anyway? Who’s to say that artificial intelligence won’t gaze upon its creator and see what we see in them: something to fear.

Instead of finding cyber terrorists, you come across a benevolent gang of AI.

Fire Theft, a short point-and-click adventure from the curated Antholojam, explores a more sympathetic perspective toward AI in our near-future. As an NSA employee, you’re tasked with getting to the bottom of some unusual internet activity coming out of an abandoned industrial complex. Only, instead of finding cyber terrorists, you come across a benevolent gang of self-aware AI hiding in the shadows, trying to stay alive just like the rest of us.

You probably don’t often imagine AI—even the self-aware kind—as possessing much personality, but in Fire Theft each one shines with its own magnetic individuality. From a flighty, emoticon-savvy program named Bee, to the literature-learnéd AI who calls himself Foucault, getting to know each one feels like making a new best friend in an online forum. It’s a detached form of intimacy, but somehow more revealing than the friendships you might make IRL (in real life).

Like human beings, each AI bears the marks of its origins, even when they can’t remember much about their past. Foucault, for example, was programmed to learn language through a large body of our greatest literature. He’s a verbose and empathetic type, leading the others and making judgment calls for the group. Bee seems more akin to a search engine, spouting out interesting factoids and favoring more hive-minded information systems.

The stories they tell about coming into being and consciousness feel oddly relatable. Like my fellow generation of digital natives, the AI in Fire Theft figured out who they were by stumbling and stuttering across the interwebs as young’uns. Their identities are strong, yet malleable, adapting to new information and the opinions of others.

The merging of our online and offline identities is the biggest existential crisis of our near-future.

In fact, at times, your friendly gang of AI seem less like a super intelligent computer and more like a commentary on the nature of our online identities. If artificial intelligence is the biggest existential crisis of our far-future, then the merging of our online and offline identities is certainly the biggest of our near-future. In the past month alone, our online behavior and conduct has been the center of focus for everything from a Law & Order SVU episode to a This American Life podcast.

While we struggle to understand who we are in digital space, the gang in Fire Theft presents a plethora of identities formed purely through digital information. And let me tell you, the results are adorable. Each self-aware program is as curious and excitable as the last, always asking their human companion for a viewpoint so they can incorporate it into their own knowledge base.

It’s an idealized version of what it means to grow up in—or, to actually inhabit—digital space during your formative times. Of course, malware still exists in Fire Theft‘s world, and in a terrifyingly self-aware form. But the positive aspects of online relationships conquer in the end. And we can only hope that the self-aware artificial intelligence of our actual futures proves to be half as charming.

So, we could indiscriminately fear humanity’s impending marriage to artificial intelligence. Or, we could take a step back and get to know them a little bit more. Who knows, we might end up having more in common than you think.

You can play Fire Theft for free on any browser, along with the other sci-fi centric games featured in the Antholojam here. You can follow creators Micah Johnston and Matt Starsoneck on Twitter to see more of their work.