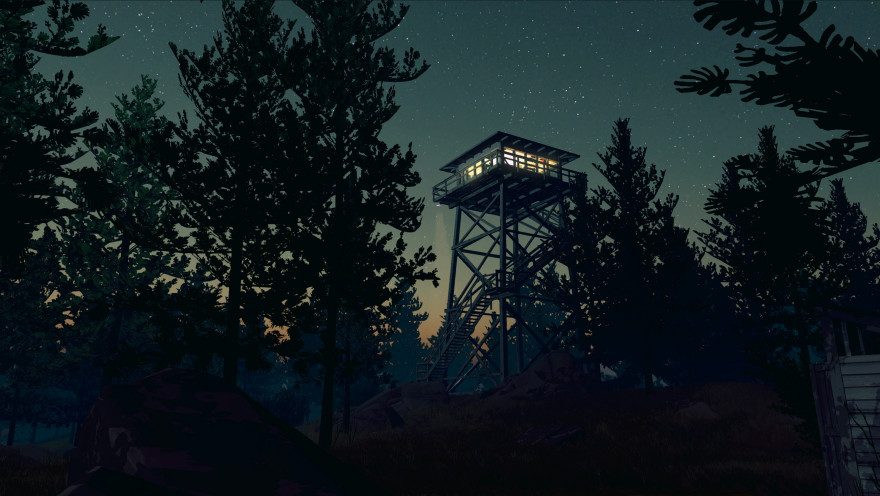 In an impromptu Q&A session uploaded to San Francisco developer Campo Santo’s YouTube account on Tuesday, the lead writer of Firewatch (and Campo Santo’s founder), Sean Vanaman, reveals how his process has changed since working on Telltale’s The Walking Dead and how he’s keeping the parlance of 1980s rural-ish Wyoming believable for his new game.

“As for keeping it sounding rural and from Wyoming, well, I’m from there, so I just kinda keep an ear out when I’m talking to people there. I was back there in October, and just little things, like I went into a store and the woman was like, ‘D’you wanna sack?’ and I was like, ‘What?! … Oh, I want a bag, yeah! I want a sack, for sure.’”

When another Tweeter asks if he ever has trouble giving up on an idea that just isn’t working out, Sean reveals a masonic secret that writers have been holding onto for hundreds of years: “I don’t,” Vanaman says, “Because I am lazy. [He laughs.] That’s really your best trick, just be really lazy, because if something gets hard you go, ‘Oh, I don’t want to do this anymore ‘cause it’s hard.”

He elaborates, “I’m not enjoying the process of trying to find the solution, so is this necessary? And then the question of, ‘Is this thing necessary or not?’ makes it a lot easier because if it is necessary you’re probably excited about it and that makes it easier to solve the problem. If it’s not necessary you can just not do it, or cut it. And that doesn’t just go for game design, it comes with running a company too. Not to say that there aren’t necessary things that are a total drag, but you make peace with those things.” His thinking falls directly in line with Zadie Smith’s two types of writers: the macro planner and the micro manager.

The entire vlog is chock full o’ interesting tidbits about how games writing works, so that’s one reason to watch it, the other being, of course, that Sean Vanaman is incredibly attractive. (I will be taking advantage of the gender double-standard in the tech industry here.)

You can follow the development of Firewatch on Campo Santo’s blog, read our treatment on Americana in the game’s art direction here, and watch the aforementioned vlog in its entirety below.