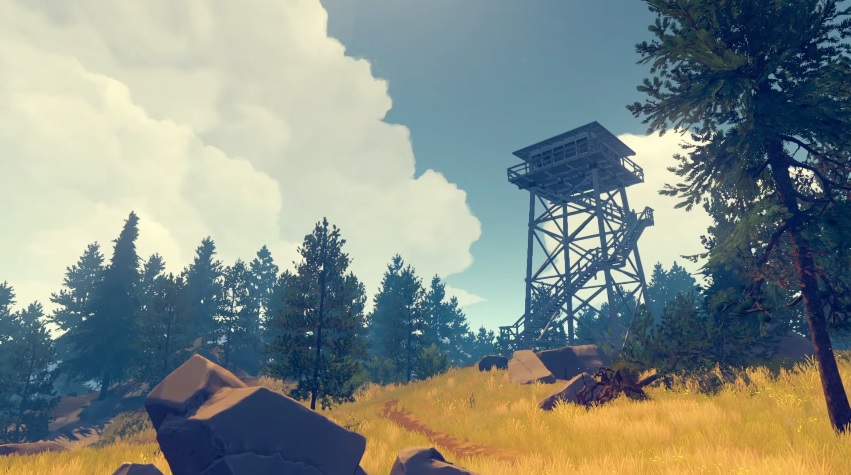 Twin Peaks. We all know it! We all love it! Even if we haven’t seen it, we know it’s a big deal! David Lynch and Mark Frost’s 1990-91 TV series has been a huge influence on videogames, from the obvious (2010’s Deadly Premonition) to … the fractionally less obvious (2015’s Life Is Strange). There’s so much to the show, so many veins to draw from: the unsettling surrealism, the amusing surrealism, the romantic swooning, the whole “dead girl” A-plot, the mystical Pacific Northwest vibe…it goes on and on.

But the lattermost is what Campo Santo’s upcoming Firewatch is cheekily nodding to with this brief, gentle “ambiance” trailer. There’s a single low, reverb-laden guitar note at the start of the Firewatch trailer that echoes the dreamy 50s-chic synth guitar that drives Angelo Badalmenti’s Twin Peaks theme: the rest of the trailer floats by on watery electric piano, copping Badalmenti’s distinctive whole-step movement in the bass.  Just listen:


And lest you think I’m missing the forest for the trees here, look at the thing! Serene wilderness; light filtering through treetops, crickets chirping, wind rustling the underbrush. This is the vibe David Lynch expressly wanted to capture with the many moments of poetic calm in Twin Peaks. That’s what has been missing from the many, many Twin Peaks lifts in games, save for the eminent Kentucky Route Zero: a quiet sense of place, an ambiance that soaks into the player like water into old wood. Pull off your boots, kick your feet back, and listen to the wind howl outside. There’s no rush at all.

Firewatch is due out for PC and PlayStation 4 on February 9th.