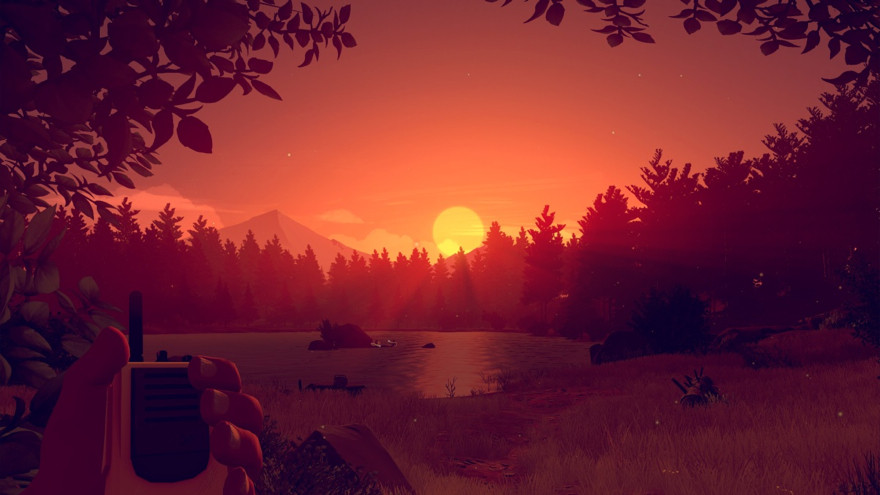 A confession: I’m a National Parks geek. When my fiancée and I moved to California from Virginia last fall, we drove and camped most of the way across the southern US, hitting 10 National Parks en route.

You’re all alone out there.

Firewatch—the upcoming game by Campo Santo—reads like a love letter to the National Parks, especially the big skies of the American West. Here’s the gist: You’re Henry, a novice fire lookout in Shoshone National Forest, a cut of land in the northwest of Wyoming right next to Yellowstone. You’re up in your tower, watching for smoke winding through the trees, all alone except for your supervisor on the other end of the radio, Delilah. Excluding Delilah, and the occasional reckless camper, Henry has to go all Smokey the Bear—you’re all alone out there. Being in that position, when things go awry the pressing matter becomes one of deciding who else you can trust, if anyone.

Though it will draw comparisons to its antecedents in the environmental storytelling genre—exemplified by games like Gone Home and Dear Esther—Firewatch breaks from the kind of story its predecessors told. Where those games got characterized by some critics as “experimental” (in the ungenerous sense) or “not-games” (in the only sense), Firewatch sets itself apart by focusing on creating suspense. “It’s a thriller through and through,” programmer Will Armstrong explained. Firewatch uses the solitary nature of the work to create an atmosphere of uncertainty, suspicion, and fear. “It’s not a hard game in the sense that you can die, but you have to make a lot of tough choices. And when you make the wrong choice it will feel like you failed in a way that we think is more consequential than a ‘Game Over’ screen,” artist Olly Moss explained.

The demo, shown at the Game Developers Conference in a space staged to look like some of the environments from the game, gives a sense of what Firewatch is about: gorgeous vistas, challenging conversations, and what can happen when you try to step out of society and into nature. In the process of solidifying these ideas about what Firewatch fundamentally is, its creators considered skill-oriented mechanics such as rock-climbing that might have added a pertinent challenge to exploration, but ultimately decided that their efforts would be better spent on the interactions between Henry and Delilah. “It became clear that ‘talking to Delilah about stuff’ was what was the most unique aspect of our game,” artist Jane Ng explained. “So we de-emphasized the physical challenges.”

To that end, the main thing you’ll be doing in Firewatch is looking at your environment, and making a decision about what to report back to Delilah on the radio. In a way, this core action perfectly captures what real fire lookouts do: watch the forest for what might look a bit off, and decide what to do with that information. But being a lookout limits your agency, too, since by the time you see something, it might already be too late. As Delilah ominously says in the trailer, “Our job is to be here when [the wilderness burns down].” In this light, the game’s title isn’t a preventative measure; it’s an omen.

by the time you see something, it might already be too late

Campo Santo hopes that players will think critically about what Henry would do or say in the game’s many conversations. “You can be a real asshole if you want to,” Jane laughed. “Giving no response is always a valid option.”

Olly, one of the team’s artists, explained that Firewatch‘s environmental aesthetic was heavily influenced by the FDR-era National Parks posters commissioned by the WPA to encourage Americans to get out and explore their country in the time before commercial flight, Planet Earth, and Google Street View. Taking the serigraphed posters as a starting point, Firewatch drew inspiration from their vibrant colors and clean lines to build up its own vision of Shoshone National Forest.

In fact, Firewatch‘s beauty might be its own undoing. After all, what I played of the game at GDC made a very persuasive argument to get out of the house and light out for Wyoming. And while the San Francisco-based team made a trip to Yosemite last summer, they haven’t all been to Shoshone yet. “Maybe we’ll do it after it ships,” Will laughed. If all goes well, you’ll find yourself in Campo Santo’s Shoshone sometime later this year.

You can check out Firewatch’s website for more about the game.