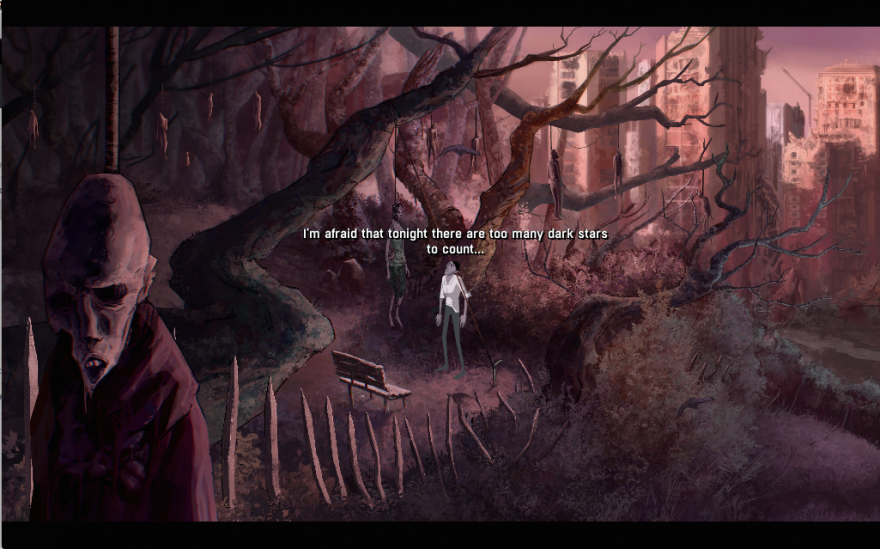 I feared for Dead Sycnchronicity: Tomorrow Comes Today. As a post-pandemic/apocalyptic tale about an amnesiac protagonist—with a title that would make even Nicholas Cage hesitate—there’s a lot working against it. But, from the looks of the beta, the game thankfully manages to approach our civilization’s impending doom with a fresh perspective.

The Madrid-based sibling dev team known as Fictiorama Studios, consisting of Mario, Alberto, and Luis Oliván, created a rich, emotive world that you can’t help but want to know more about. A lot of hard work and passion has clearly been poured into each aspect of the game: an expressive art style (by Martín Martínez), a heart-stopping score (composed by two members of the Fictiorama team), and prose that knocked my socks off.

An expressive art style, a heart-stopping score, and prose that knocked my socks off.

Though the voice acting was yet to be implemented in the beta, the writing itself was enough atmosphere and tone. Usually in games, I find myself conflicted between my love for story and my impatience to just get the hell on with my life. But Dead Synchronicity had me inspecting every single interactable object, just so I could get my fix.

To some extent, the writing outshines the game’s protagonist in an awkward way—in the sense that Michael isn’t presented with enough personality to support such a captivating outlook on life. Like when he examines a rusting park fence and ruminates about how, “the park was able to devour the fence effortlessly, the metal bars becoming like plasticine, molded by the whims of the vegetation.”

Generally, I’ve wearied of the gritty-world antics of videogames. But Dead Synchronicity once again proved me wrong, by aiming for a tone that’s more akin to HBO’S Leftovers than the more typical The Road and Walking Dead allusions. In the fiction, a mysterious cosmic rift in the sky causes a pandemic, where victims “dissolve” cell by cell until they’re nothing but a pile of skin and blood. Yeah, it’s pretty gruesome. They can’t even disintegrate in peace, since victims also get trippy visions of earth’s horrible future.

The New World order that rises from the chaos is characterized not only by death, murder, poverty, and desperation, but also more interestingly by a feeling of absence. Like The Leftovers, civil people still walk the streets, but an overwhelming sense of lost innocence hangs over them. The diseased victims who die horribly are actually the lucky ones, their loved ones left behind to face a festering world.

Loved ones left behind to face a festering world.

Dead Synchronicity‘s story, though commendable, occasionally oversteps its own grittiness, particularly with a character named Rose. As a mentally ill underage girl forced into prostitution, Rose’s victimization doesn’t seem to serve any purpose other than giving the protagonist reason to be her savior through an object puzzle. It’s feels a little to much like women as background decoration, and uncharacteristically lazy storytelling. Yet, despite this oversight, Fictiorama’s boldness generally pays off, presenting nuanced perspectives on the loss of identity experienced by refugees, as well as the dangers of over-policing.

Cinematically, Dead Synchronicity uses a comic book panel style which works well with the hyper-noire story world. It’s not often that a 2D fixed camera angle can actually manage to surprise or scare you, but the guys at Fictiorama Studios are clearly a crafty bunch.

Though the beta is only available to Kickstarter backers and press, you can check out the demo for yourself. Or, for the complete experience, wait until April 10th when the game will be available on PC, Mac, and Linux. Dead Synchronicity will be an episodic saga, so you can follow its progress through the team’s devlog and Steam page.