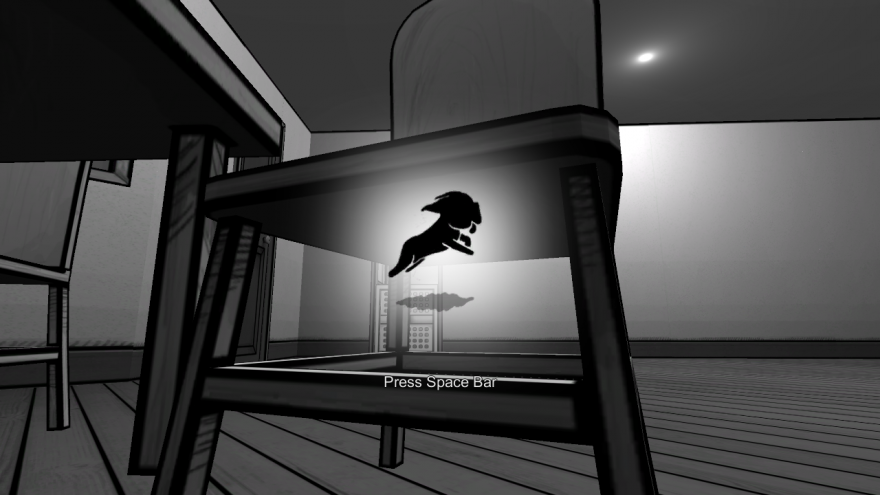 Get ready for your warm-fuzzy capacitors to explode, because there is now a Kickstarter campaign for a first-person puppy videogame.

Adopted casts you as the newly rescued Luchador, a Boston Terrier with tiny legs and a big bark. Luchador has his work cut out for him, though, because tensions are high among the humans in his new home. With a mere 36-hours to go before fiancés Wyatt and Marisa tie the knot, their roommate and Maid of Honor Laurel decides not to show up to the rehearsal dinner. Instead, she returns home with you—the adorable Luchador—in her arms, which is when things go from bad to worse.

The Kickstarter video for Adopted includes: a lovable snaggle-toothed mutt, smart people talking about making a unique and different kind of game, and then a lab in the group shot wagging his tail like “whut where’s my treatz??”

But Adopted is more than just a cute face. There’s a very personal and human story at its core. “It’s an exploration how the way we love others is often deeply affected by the both choices we make and the ones we never realized we should have,” reads the Kickstarter. “How sometimes we can’t prioritize everything that’s important, and inevitably, something has to give. How as a twenty-something you might think you have the whole world figured out, but you actually have no idea how little you actually know. It’s about how some actions appear unforgivable, yet sometimes we find the strength to love one another unconditionally, no matter what.”

Adopted bares all the paw-print marks of a true friendship.

Inspired by Clockwork Demon co-founder Caleb’s own beloved Frenchie, who passed away while he was on honeymoon, Adopted bares all the paw-print marks of a true friendship. The loss made “Caleb reflect on the life of his furry friend, how Jackson had brought him and his wife together during rough moments in their relationship, and how the dog’s unconditional love inspired him to be a better person and love others the same.” It’s a classic tale of the pure and unconditional support of man’s best friend rescuing the humans rather than the other way around. It just goes to show you that the tiniest creatures can make the biggest changes.

As Luchador, it’s up to you to rescue your own humans. By sniffing, barking, chewing, and fetching your way through their lives, your choices affect the story and characters in real-time. After discovering character’s secrets and motivations, you must decide whether to expose them or not. “Who will you support when two characters find themselves facing separate dangers, and there isn’t time to help both?” the game asks. “Your actions will make or break relationships and decide the futures of Marisa, Wyatt, and Laurel, as well as impact which challenges you face in-game.”

On the technical side, Adopted uses AI driven by Goal Oriented Action-Planning (or GOAP, also used in F.E.A.R., S.T.A.L.K.E.R.: Shadow of Chernobyl, and Deus Ex: Human Revolution), so characters can respond dynamically to your puppy whims rather than through pre-scripted code.

Adopted seems to be trying to remove the more black-and-white morality typically found in decision-making videogames. Instead, it favors a narrative about making mistakes, trying to be better, and second chances. Clockwork Demon even says the narrative is “deeply grounded in the team’s own mistakes, struggles, and quarrels, both in relationships and with ourselves.”

Though the team has already spent a year working on Adopted and have a pre-alpha built, their funding has run out. They’ll need to reach the Kickstarter goal to keep working, and hope to release next year if so. Though they are mostly focusing on PC and Oculus Rift ports, they’re still waiting to announce any stretch goals. To support the creation of this adorable and touching game, donate here and vote for it on Steam Greenlight.

Also, do remember to reach out to your local rescue shelters to help actual adorable rescue dogs who need to find their forever homes. Petfinder is always boasting cute adoptables, and the fantastic NYC-based shelter Social Tees is always looking for fosters/adopters.