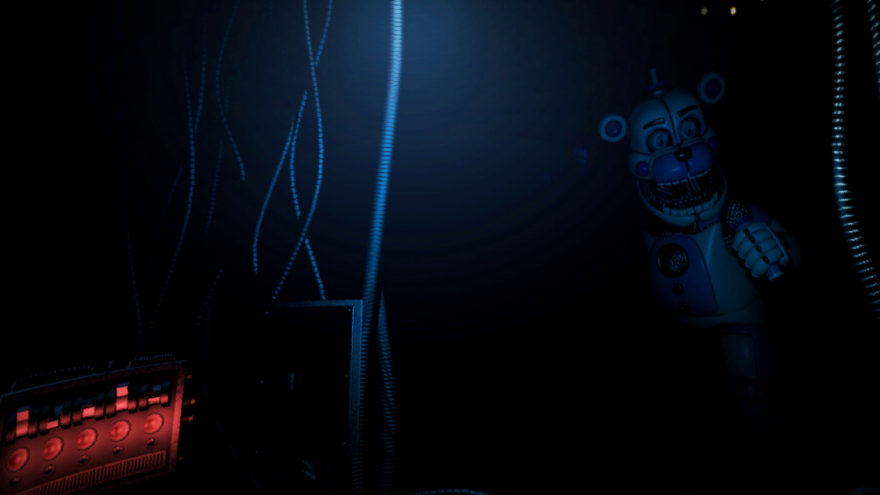 One can only sympathize with Scott Cawthon. Once a struggling game-maker, he seems concerned that, just as unexpectedly as it arrived, his recent success might disappear. So he’s been working it while it’s hot—inside two years, he’s put out six different Five Nights at Freddy’s games.

But 2, 3, and 4 were all poor. To keep his audience hooked, Cawthon introduced side characters, back stories, and vague, irrelevant mysteries. He created a lore. FNAF became turgid. And its original, wonderful premise and mechanics were drowned by arbitrary plot twists. The newly released Sister Location marks yet another chapter in the Freddy’s canon, and at its weakest, when it makes passing references to events from the other games, it resembles a spin-off. Moment to moment, however—if you can ignore the overarching story, and Cawthon’s nervous attempts to create a bilious, Marvel-like “multiverse”—it’s as funny, frightening, and odd as the very first game.

Sister Location finds horror in the smallest of things

Elements from the rest of the FNAF series are present, but Sister Location possesses comparative brevity and a lightness of touch. Where the third and fourth entries in particular relied on contrived, long-winded narrative setups, Sister Location finds horror in the smallest of things. In its most frightening scene, you are trapped inside a cupboard and must fight to hold the door shut while an animatronic pries it open from the other side.

Sister Location is comprised of several of these short vignettes—as opposed to the other FNAF games, which you survived by learning enemies’ behavior patterns, rarely in Sister Location will you do the same thing twice. One distinct sequence, wherein you must disassemble an animatronic by locating its tiny, hidden reset buttons, gives way to another, as you crawl through a pitch-black room, trying not to disturb a horrifying, childishly-voiced robot called Ballora.


Cawthon’s eye for macabre, unsettling images—especially among independent and solo game-makers—is unchallenged. Between shifts, your character relaxes at home and watches TV. It’s such a tiny detail, but placing a photographic image of popcorn among Sister Location‘s otherwise colorful, abstract environment makes the game look so hokey and cheap, and cheap horror—The Texas Chain Saw Massacre (1974), The Blair Witch Project (1999)—is nastier, often better horror. Cawthon is presumably well financed by now. But there’s a difference between selling out and selling. His games still look like, and are, the product of one very wild imagination.

Although, credit must also be given to Heather Masters, the voice actor behind Sister Location‘s undeniably sympathetic antagonist Circus Baby. Where FNAF previously tried to emphasize its monsters by giving them increasingly gruesome visages and histories, in Sister Location, a simple voice, a few softly spoken words—“I thought you liked me, I thought I did everything right”— make Circus Baby the series’s most frightening and tragic character. Masters’ siren coos are as eerie as they are impossible to resist.

And what an ending. Funny, frightening, and visually powerful, it exceeds even the grim sarcasm of the original Five Nights, which after a week of horror and torture, awarded you a measly $120 pay stub. Sister Location, financially, is a safe bet for Cawthon—given how anxiously he responds to even the tiniest perceived failure, the certainty of return on an established series must provide him some comfort. But creatively, it’s his freshest endeavor in over two years. Between slapstick humor to physical and psychological horror, even character drama, Sister Location gracefully, gleefully, rapidly moves.

You can purchase Five Nights At Freddy’s: Sister Location on Steam.