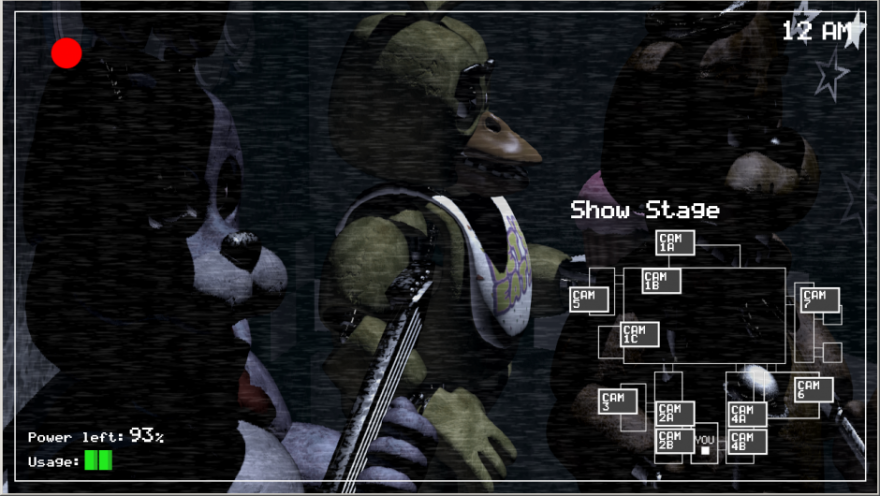 Automatonophobia is a common source of horror. Classic examples include Chucky, the murderous doll in the Child’s Play film series, and Pennywise the Dancing Clown in Stephen King’s It. The fear of these dolls, dummies, and mannequins emerges in their subversion of how we expect humans to behave. We understand and communicate with each other through expression, but the dead faces of these inanimate portrayals are uncanny—that disturbing space between the familiar and alien. It’s a fear that seems destined to spread as we enter a future of robots and flying drones.

It’s not at all surprising that the latest kitschy horror game to be making the Let’s Play rounds on YouTube is about killer animatronic animals, then. Usually, these horror games are easy to ignore, but further inspection proves that Five Nights at Freddy’s goes beyond exploiting this common horror trope.

As you sit there, unable to run away, you may start to pray for the instantaneity of a jump scare.

Creator Scott Cawthon has used the limitations of his low production to soak the uncanny into his game’s design. As with Parsec Productions’s Slender: The Eight Pages, Cawthon finds a way to avoid having to animate his monsters or otherwise have them reveal their cheapness. Parsec did this by having you avoid looking at the Slenderman or else be killed; Cawthon uses the idle role of a nightshift security guard at a monitoring station. The result is almost unbearably slow and still, and certainly fraught with tension.

You sit in your small, filthy office ready to monitor the cameras set-up across the premises. You’ll stay in this spot for the entire five-day duration of the game, swiveling on your chair to reach light switches and door controls when necessary. The recorded introductory message left for you reveals what the job description didn’t: the robotic mascots at Freddy Frazbear’s Pizza restaurant become “unpredictable” after hours, and may try to sneak in to dismember you.

It gets worse. It turns out that your employer is so tight with budget cuts that they limit the amount of electricity you can use during your shift. To battle the fluffy murderers you need to use a combination of monitoring cameras, turning on lights, and activating security doors; all of which consume power.

As you sit there, unable to run away, you may start to pray for the instantaneity of a jump scare. At first, the animals toy with you, turning to face a different direction as you spy them while flicking between the different monitors. Not long after, they disappear from their usual spots, appearing in various other camera feeds in a frightful frozen pose. It’s the creepiest game of musical statues I’ve ever played.

Cawthon makes effective use of sound, such as pattering feet and the creaking, moaning foley of the pizzeria, to put you on edge. Some of the camera feeds get interrupted as well, exacerbating your limited perspective, and the terror that comes with it. You enter this hyper-sensitive state where you jump at almost everything. Really, it’s a battle with yourself—stuck between panicking in the dark to conserve power, and turning the lights on for a touch of safety.

Whatever your strategy, you’re probably going to falter at some point, and have all of that built-up tension lift you out of your seat when one of the animals suddenly appears in your face screaming. It’s enough to make me never want to be a security guard, especially as you don’t even hit minimum wage for all that psychological stress.

You can purchase Five Nights at Freddy’s on Desura. You can also vote for it on Steam Greenlight.