by Jason Johnson
This article is part of a collaboration with iQ by Intel.

Thanks to the inexorable march of technology, the world of videogames is flourishing. From multi-million dollar productions pored over by huge studios, to small artistic endeavors from one-woman teams, to games that let you express your own creativity, 2015 is set to be a standout year for the medium. Here are a few titles to get excited for.

As the title suggests, Mario Maker is the perfect leisure activity for makers, those self-motivated inventors and tinkerers who would rather hack their electronics than play by manufactured rules. For the 30th anniversary of Super Mario Bros., Nintendo is embracing the DIY ethos, handing over the keys to the airship, so to speak. More or less a Mario-themed construction set in a game case, this one is sure to fulfill a childhood dream of anyone born in the 80s: it gives players the tools to build (and then destroy) their very own Mario levels, warp pipe by warp pipe. The kit looks robust, with pieces that range from those classic shroom-filled question blocks, to the cute and cuddly bad guys, to Mario 3’s famous flying raccoon tail power-up. Woo-hoo!

The blind may be leading the blind, but Beyond Eyes is extremely eye-opening. In this painterly exploration game from the Dutch studio Tiger & Squid, you play as a little girl who is sightless. You can’t see the world around her, and neither can she, but rather than dwelling on the dark side, the game treats her physical limitation as an empty canvas. As young Rae presses forward into the blankness to rescue a lost cat, she leaves a trail of color in her wake, bringing the picturesque scenery to life. Sherida Halatoe, the lead-everything at the one-woman studio, has been toiling away for 3 years on this beautiful game, and it should be well worth the wait.

The next great American landscape artist might very well be currently working in videogames. For proof, look no further than Firewatch, a gorgeous production best known for its jaw-dropping representations of dusky orange sunsets. The debut game from Campo Santo follows the growing anxiety of a volunteer lookout who is stationed deep in the national forests of Wyoming, thousands of acres away from anything. The art direction of graphic designer Olly Moss lends the game a woodsy, peaty Americana vibe, and one team member is a tried-and-true Wyomingite, raised in a city that is flanked on all sides by giant arches of elk horns. It doesn’t get much more authentic than that. 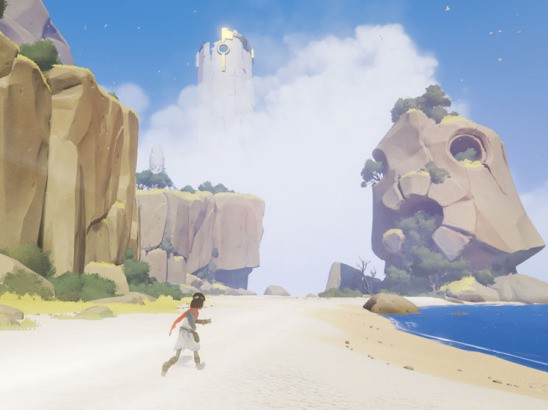 After the mighty Studio Ghibli lent a hand with the animation on the PlayStation 3 hit Ni no Kuni, there was little question if games could hold their own with traditional animated films. Then along came Rime and blew that question out of the water. This maritime exploration game is exceptionally pretty; it looks like our long dreams of “playing a cartoon” come to vivid, colorful life. This one tells the story of a lone wolf child on a deserted island that harbors a great mystery—because what good would a deserted island be without a great mystery? This should be perfect for entertaining the kids, or for late night gaming sessions after you’ve put them to bed.

Naughty Dog is the undisputed king of creating incredibly realistic gaming environments where you do incredibly unrealistic things. Case in point: Uncharted 4’s canyons and lush jungles are photo accurate with a high-definition sheen. If previous entries in the series are anything to go on, they will be the backdrop for spectacular stunts, like hanging by your fingertips from a crashing train, and miraculously surviving a crashing plane. Needless to say, there are a lot of things crashing in these games, but Naughty Dog’s focus is always on character and story; the combination has earned them a reputation as the Steven Spielberg of action games. Seeing how Uncharted 4 will be a showpiece for Sony’s powerful PlayStation 4, it promises to outdo itself in terms of explosions on screen.